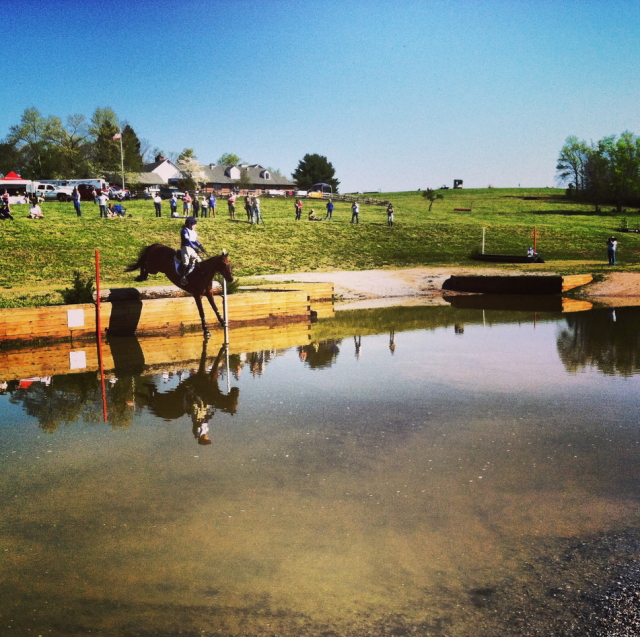 Straddling the seam of Areas II and III, FENCE Horse Trials is known for its cozy ambiance, creative courses and challenging terrain. The stabling, dressage and show jumping are situated on the infield of a steeplechase track, which hosts the annual Blockhouse Steeplechase each May … 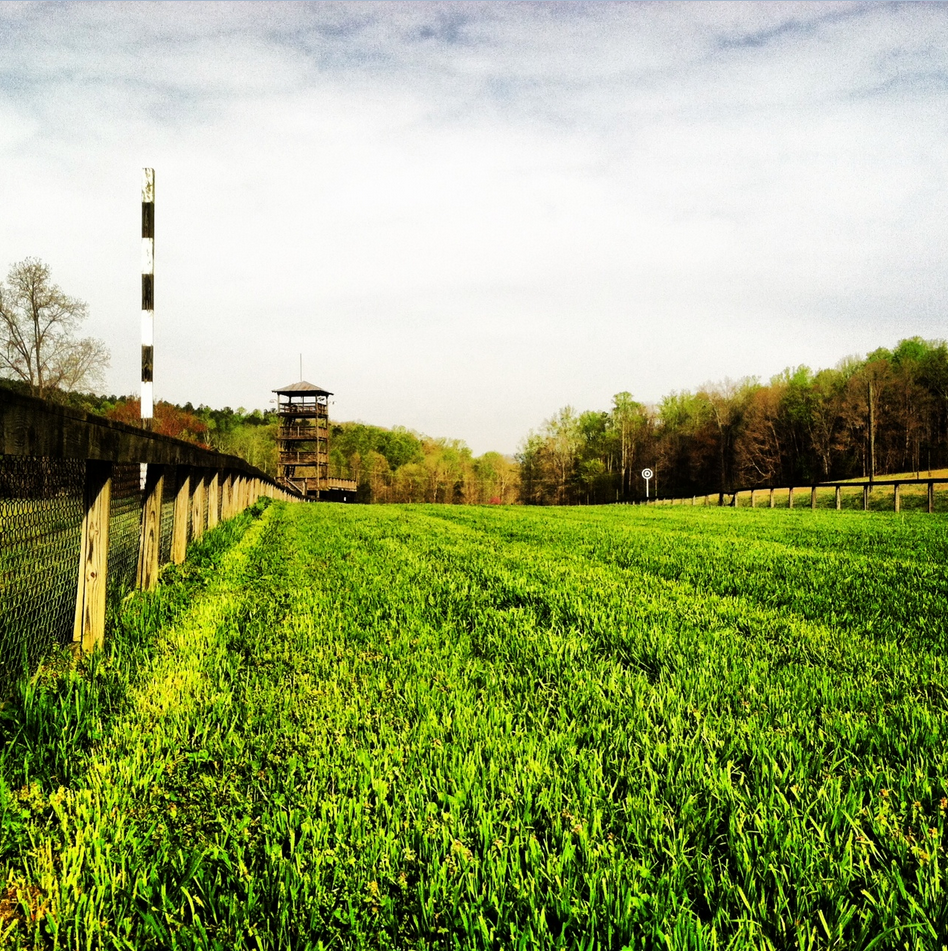 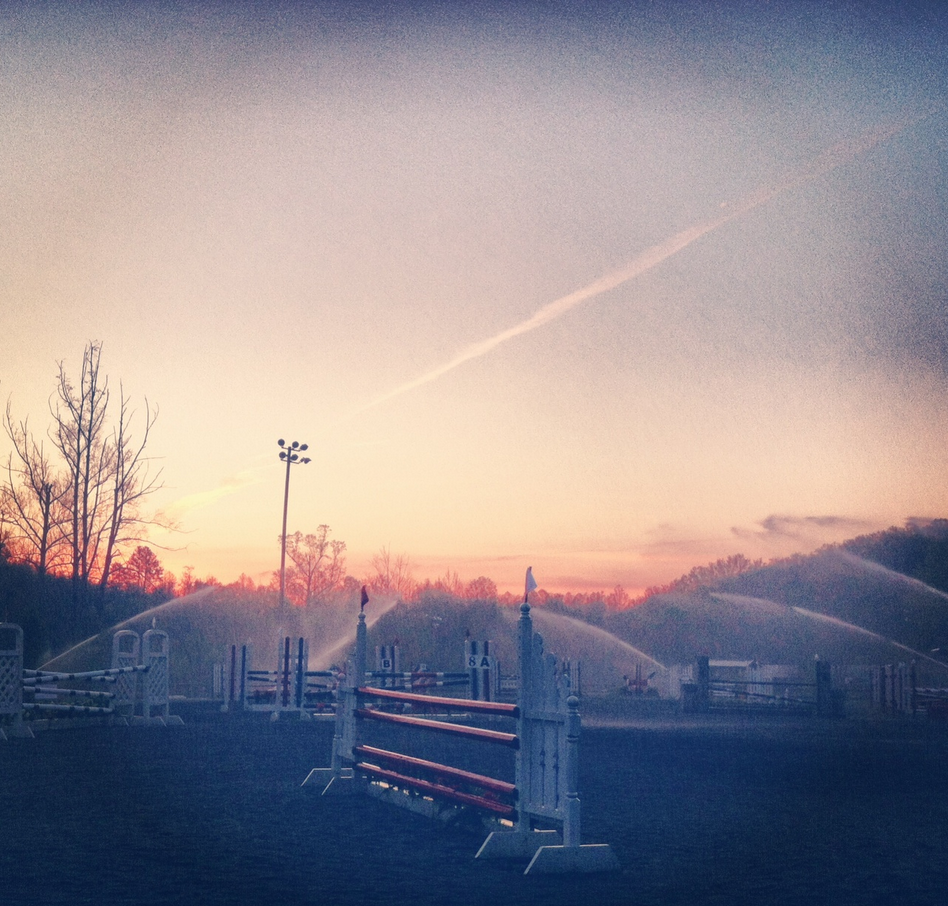 A Sunday sunrise at the show jumping ring, located in the massive infield. Photo by Leslie Wylie.

… while the cross-country course snakes its way up a nearby hillside. This weekend’s edition saw an expanded track that boasts several new jumps, including some beautiful crafted tables and a combination built out of a giant fallen tree.

Of course, the crowd favorite was course designer Greg Schlappi’s signature “beer cooler” table, which quickly became a happy hour hotspot on Friday afternoon. Local trainer Amy Barrington paused from walking courses with students to do a little bartending. It was great to see Amy out and about — she was clearly in her element and determined not to let her accident last fall slow her down … quite literally! I tagged along on one of her course walks and had to jog to keep up! 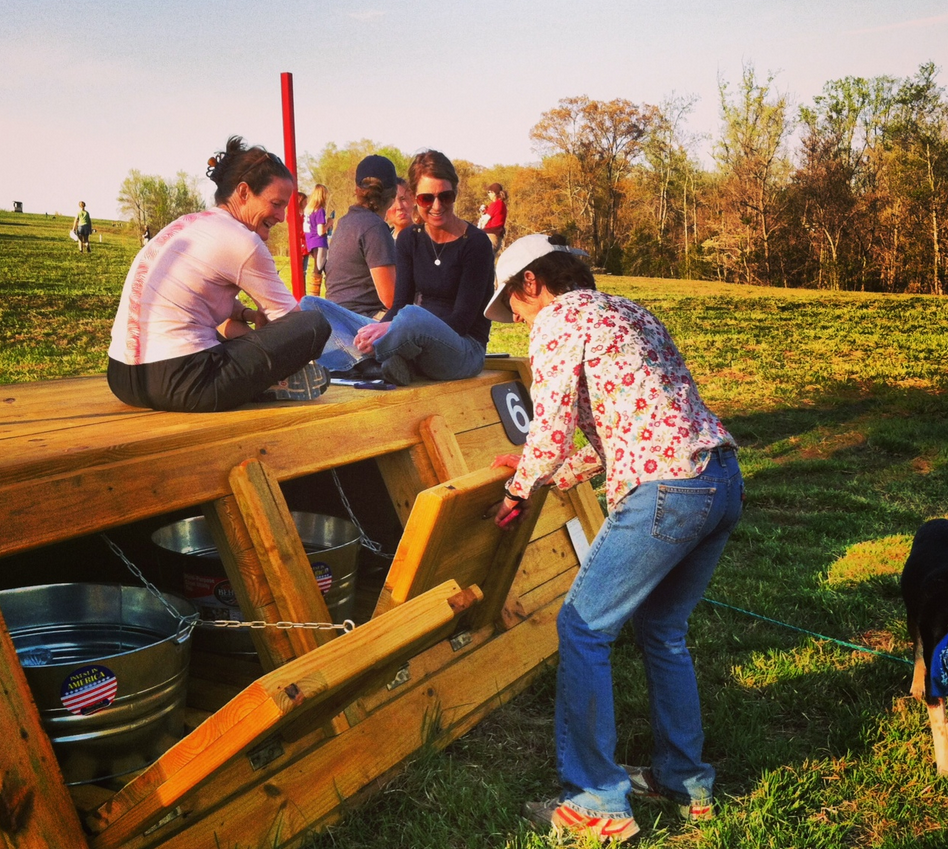 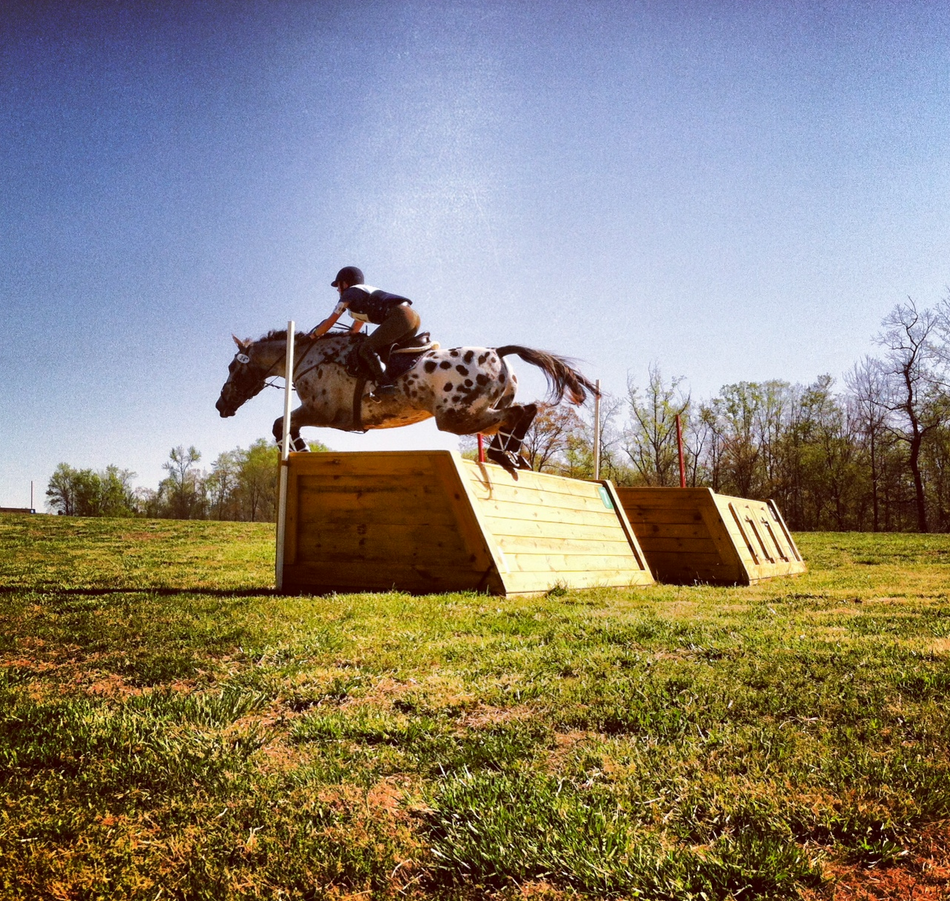 The courses looked good and rode even better. “I really liked the new jumps,” Open Prelim A winner Caroline Andrews said of this year’s beefed-up course. “It was nice to have some bigger tables and it was really well designed.”

Caroline and Will You Be Mine, of Charleston, S.C., led their division from start to finish. Despite it only being their second outing at the level, they earned the lowest scoring dressage test of the event (27) followed by two double-clear jumping rounds.

The pair has several wins and top finishes to their name, and each one is well-deserved. Caroline rescued Will You Be Mine, now nearly 8, from an auction when he was 8 months old. She isn’t sure of his breeding — he didn’t even have a coggins when she bought him. “He’s like a dog,” Caroline says of his personality. “He always wants to like you; he’s always in your face. He’d much rather follow you around the whole show than be in his stall.” 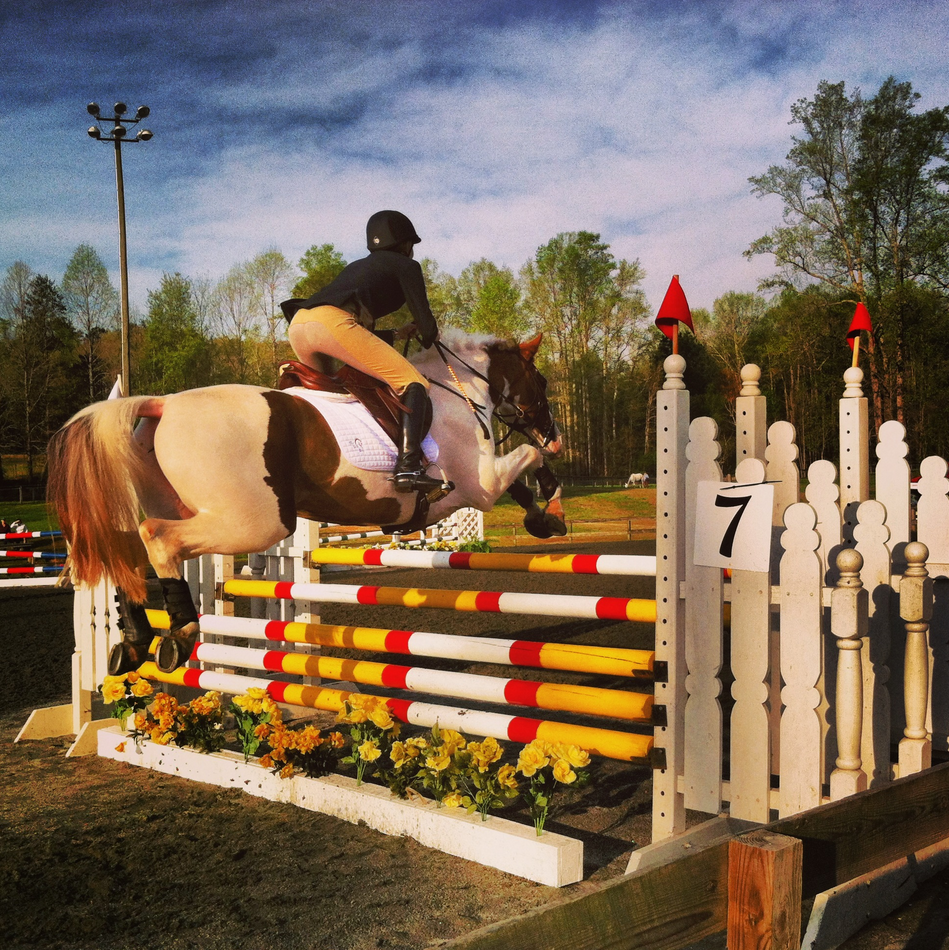 Caroline Andrews and Will You Be Mine, winners of Open Prelim A. Photo by Leslie Wylie.

The winners of Open Prelim B, Hillary Irwin and Bit of Irish of Elkin, N.C., also have a long history together. Bit of Irish is a homebred Thoroughbred who didn’t make it to the track, taking up with Hillary as a 3-year-old. The pair has been steadily making their way up the ranks, most recently finishing 8th at the Carolina International CIC*. Next on their agenda is the IP at Poplar Place followed by a move-up to Intermediate at Virginia in May.

“She’s sort of been that horse that comes out and does anything you ask every day and just tries super-hard,” Hillary says of the coming 7-year-old mare. “She loves cross-country — she knows it now and she’ll just do anything for you. She’s wonderful on the flat in the sense that she always tries; she never says no. She’s just a trier and to me that’s the best.” 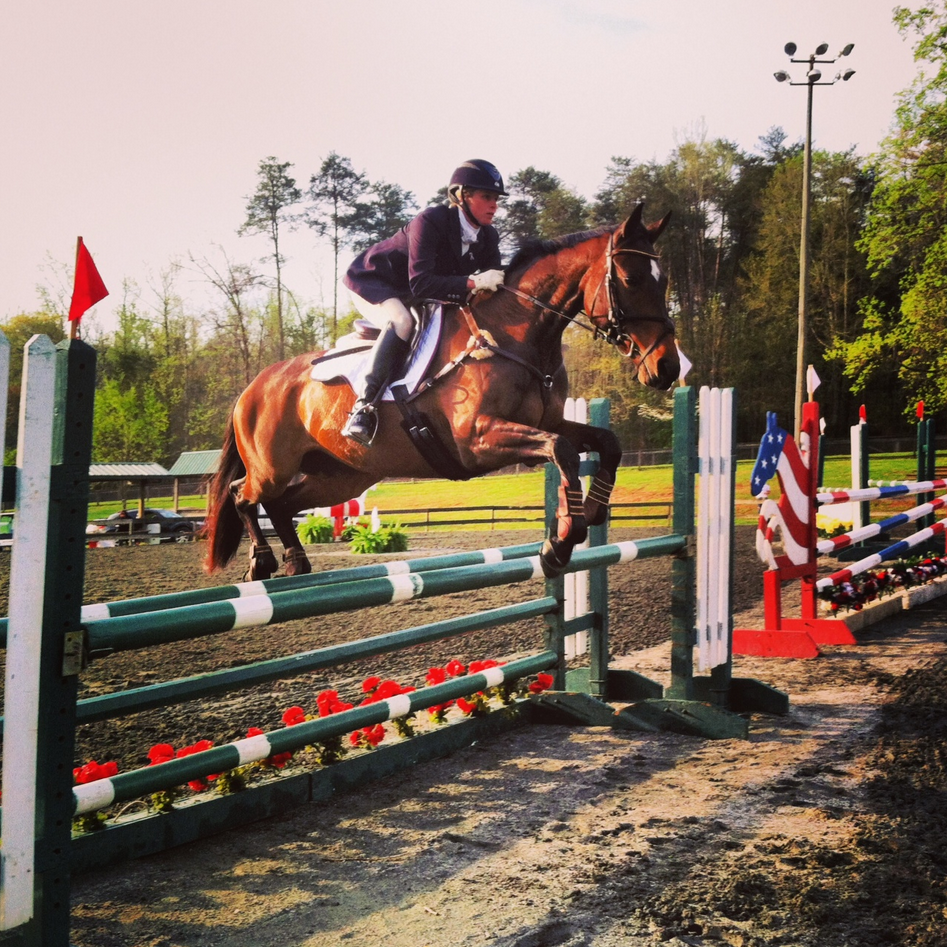 Hillary Irwin and Bit of Irish, winners of Open Prelim B. Photo by Leslie Wylie.

Once again this year FENCE hosted a Collegiate Team Challenge, attracting participants from universities throughout the Southeast. One of Clemson’s four teams, the Clemson Stripes, won this round by a landslide, followed by USC Aiken in second and a composite team from the University of Virginia/University of Transylvania in third. The University of Kentucky and the University of Georgia also sent teams. 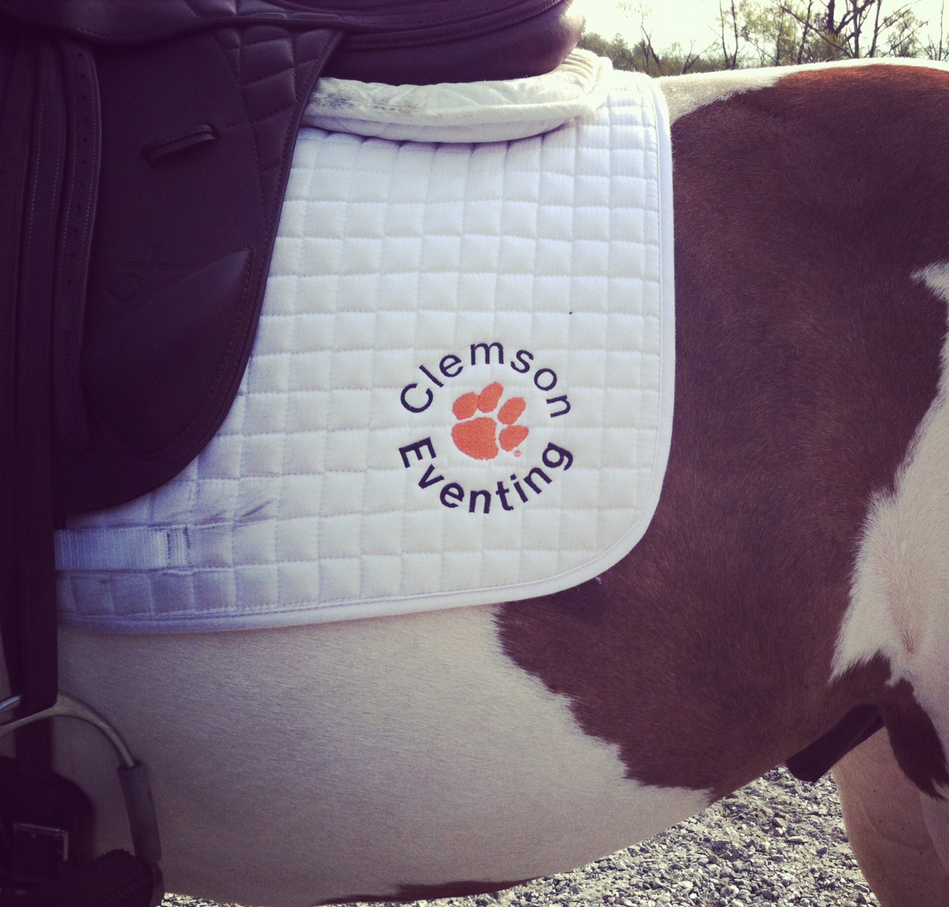 FENCE is the kind of lower-level event that I always walk away from thinking, That’s what it’s supposed to be about, and this year’s incarnation was no exception. Check out the final results here. 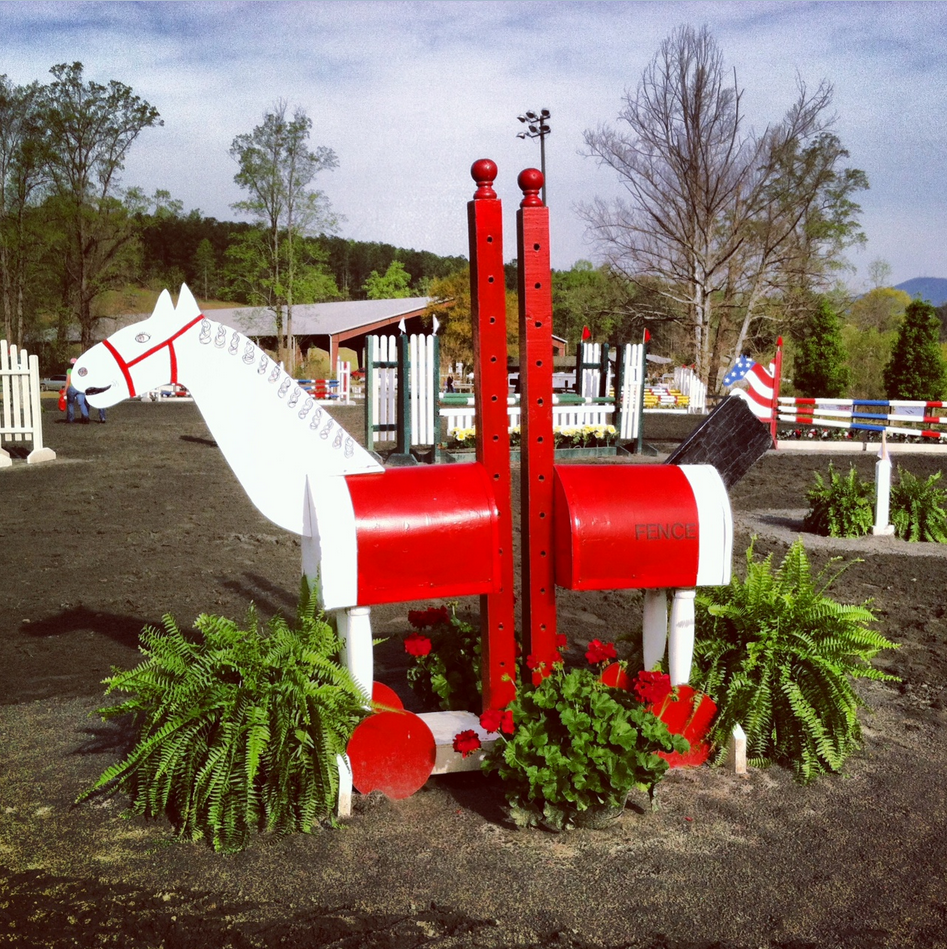 For more photos from FENCE H.T. and other events around the country, check out EN on Instagram. The handle is “goeventing” — run a search or click here!