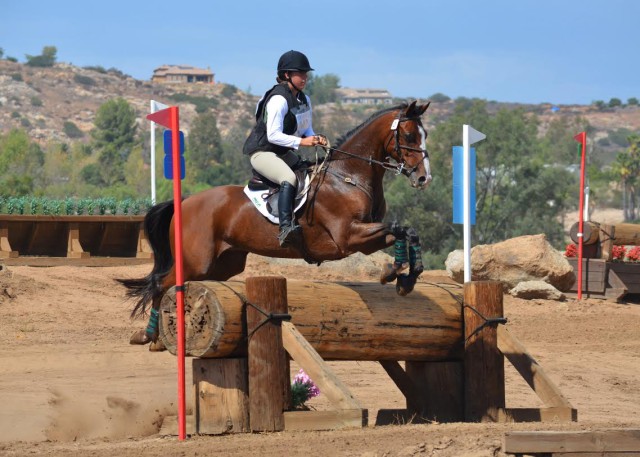 It’s always inspiring to hear about a rider who has come up the eventing levels at the same time as her horse, attacking the learning curve together and making adjustments as they go. Kaitlin Veltkamp is one such rider, having begun riding the now 13-year-old Dutch Warmblood gelding, Flashpoint D, as a 4-year-old when she was just 11.

“I started riding when I was 5,” Kaitlin said. “I’d watched the Olympics with my mom, and I saw David (O’Connor) do his victory gallop, and I pointed to the screen and said ‘I want to do that!’ My mom signed me up for riding lessons, and the rest is history.”

When Flashpoint D came into the Veltkamp family’s life, they weren’t actively searching for a new horse. “I’d had a schoolmaster who had recently passed away from colic, so we were still kind of reeling from that. There was talk of another horse at some point, but we were taking our time.”

Flashpoint D had been imported from Holland, and because of the year of his birth, his registered name was required to start with a U. His registered name was changed to “Under Wonder,” and that quickly evolved into a comical barn name of “Undie.” “It just stuck,” Kaitlin laughed. “You can imagine the jokes we’ve had because of that name, and eventually his name was changed to Flashpoint D, but Undie didn’t go anywhere!” 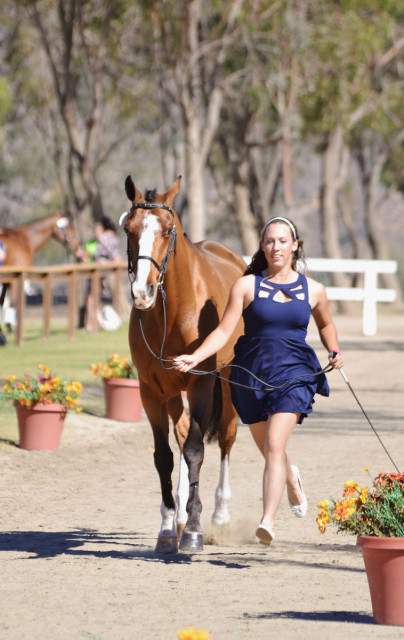 After being imported, Undie competed with Anna Collier for a year at Novice before she called the Veltkamps to find out if they’d be interested in taking a look at him. Kaitlin took over the ride on Undie from there, starting with Beginner Novice and never looking back.

Kaitlin and Undie cruised through the levels, stepping up to the Intermediate level two years ago. In their first CCI2* at Galway Downs, though, Undie suffered a superficial tendon tear that ended the pair’s quest to compete at NAJYRC. “We did everything we could to get him back on track, but the tissue grew and granulated and eventually turned into scar tissue. None of the vets had seen anything like it, and no one thought he’d go above Prelim again,” Kaitlin said.

“It turns out, though, that this happens a lot to endurance horses, and with the help of some vets who’d seen the issue before we were able to get him rehabbed and coming back better than ever.”

The pair came back out ready to pick up where they left off, and they successfully moved up to Advanced in 2014 at Twin Rivers, finishing third. Aside from one “green moment,” as Kaitlin describes it, at Galway Downs this past fall, the pair did not finish outside of the top three all year. 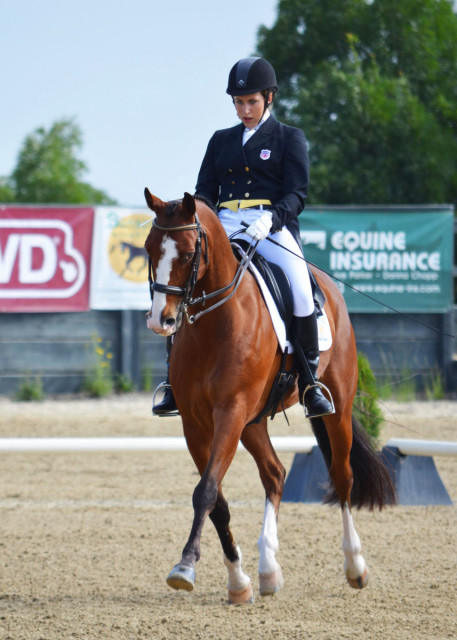 Kaitlin’s nomination to the Eventing 25 list is a challenge she’s excited to take on. “I’ve never really done clinics with anyone,” Kaitlin said. “It will be great to get another pair of eyes. I read about how (Leslie Law) wants to be a mentor for developing riders, someone they can call when they need advice, and I’m very excited to have that opportunity. Anything they can give me, I’m more than happy to hear.“

While Kaitlin gears up for the upcoming season, she thanks her lucky stars each time she sets foot in the stirrup aboard Undie. “I never really know how much time I have left with him, soundness wise. So I just try to enjoy it and take things one day, one competition at a time. Ideally, we’ll make it to Rolex or another four-star in the next couple of years. Right now, we’ll focus on getting more mileage at the three-star level,” she said.

“After he’s done, it’s hard to say. I just got a new 3-year-old and moved out of my parents’ house, completely on my own dime, so I do need to finish school and work on building a career that can sustain the competing. I’d like to incorporate sport psychology into the horses; I think it could be a good practice to get into to help others.”

Kaitlin juggles two jobs, school and her horses currently, so she’s accustomed to making ends meet. “I don’t really sleep, and eating is pretty secondary most of the time,” she laughed. “Sometimes I wish I could take a step back from work, but the horses are a priority, and I need to be able to maintain them. It’s definitely a balancing act. The good thing is that I can be more flexible with school, and I plan to enjoy Undie while I can. Horses like him don’t come around often.“