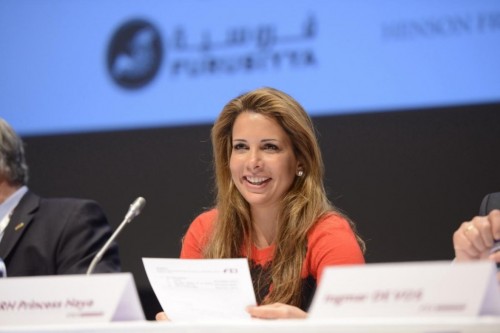 The FEI posted a press release today titled “National Federations call on HRH Princess Haya to stand for third term as FEI President.” Which struck me as strange because I’d just read this other story in The Telegraph on Tuesday titled, “FEI president Princess Haya faces calls for resignation over doping and horse welfare crisis.” Hmmm. Somebody has clearly been snacking on coo-coo puffs … but is it the FEI or the free press?

Let’s break down the FEI press release paragraph by paragraph in an effort to figure out what’s really going on:

Representatives from National Federations on four continents made impassioned pleas for HRH Princess Haya to reverse her decision not to stand for a third term as FEI President during today’s FEI General Assembly in Montreux (SUI).

The calls came after 100 National Federations signed a petition requesting the convening of an extraordinary general assembly as soon as possible for the purpose of amending the Statutes in order to prolong the term of the FEI President.

A stark contrast to the first two paragraphs of the Telegraph story: “Princess Haya of Jordan, the wife of Sheikh Mohammed, is expected on Wednesday to face calls to resign as president of the International Equestrian Federation (FEI) over the doping and horse welfare crisis in endurance racing.

“The FEI’s three-day general assembly began on Tuesday and will confront the global outcry over the drug abuse, horse deaths and brazen rule-breaking in the Middle East which have propelled the previously little-known equestrian discipline — in which horses compete over distances of up to 100 miles a day — into notoriety.”

Are they even talking about the same assembly?

Princess Haya excused herself from the discussions, stating that it was inappropriate for her to be in the room when issues of governance relating to the Presidency were being debated.

Yeah, I wouldn’t want to be sitting in the same room with all those people either.

Representatives from Belgium, Mauritius, Sudan, Chinese Taipei, USA and Jamaica made passionate speeches, calling on Princess Haya to reconsider the decision not to seek a third term when her Presidency ends in November 2014.

Let’s take a closer look at the above named countries and their relationship to the issue:

Belgium: According to The Telegraph, “A fortnight ago, in an interview with The Telegraph, Pierre Arnould, a Belgian coach and FEI committee member, said the governing body had to take serious action or endurance racing could be banned by a higher authority. He was rebuked by FEI secretary general Ingmar de Vos over his comments, but offered support by senior riders and officials.” I GUESS PIERRE HAD A CHANGE OF HEART.

Mauritius: Mauritius is an island about 1,200 miles off the coast of Africa, best known for being the sole habitat of the now-extinct Dodo bird. I DON’T THINK THEY GET THAT MUCH OF A SAY WHEN IT COMES TO THE FUTURE OF INTERNATIONAL HORSE SPORTS.

Sudan: The Sudan Equestrian Federation doesn’t have a website but they do have a Facebook page. IT HAS 12 LIKES.

USA: According to The Telegraph, “The Dutch federation says it has years of testimony from officials and vets who were physically threatened while trying to enforce the rules at FEI rides.” Do you think the U.S. wants to get on the FEI’s bad side??? DOUBT IT.

Jamaica: From The Telegraph: “Princess Haya herself brought in a two-term limit in 2006 so this summer’s proposal was a surprise. Princess Haya was ‘flattered to be asked,’ though the Jamaican equestrian federation alleges she ‘aggressively lobbied’ for it herself. In September, she announced she had never sought a third term, after the Swiss federation alleged a conflict of interest.” I AM SO CONFUSED RIGHT NOW.

“It’s ironic to think that, from the media perspective, we were told that we would be coming here to seek her resignation, but in reality we’re seeking her return,” United States Equestrian Federation Secretary General John Long said.

If you people are seeking her return, shouldn’t you be addressing the conflict of interest issues first?

Following the speeches, Princess Haya returned to a standing ovation from delegates.

The Bureau, which met immediately after the General Assembly, has agreed that the extraordinary general assembly will be held on the second day of the FEI Sports Forum in Lausanne (SUI) on 29 April 2014.

Clearly, there is a disconnect between the FEI and reality — reality being, there are some very real issues that need to be addressed before Princess Haya assumes a third term as president. The three takeaways I see here: