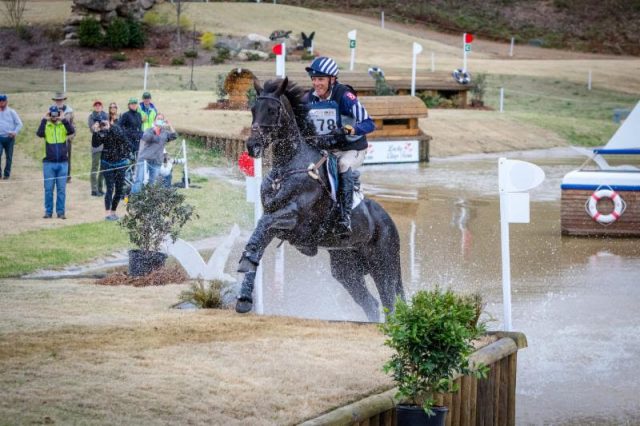 Poor Boyd Martin has endured a lot of good-natured ribbing this weekend about the infamous boat that gave he and Tsetserleg grief during the 2018 World Equestrian Games. The jump resurfaced like a bad penny on CCI4*-S cross country track this weekend here at The Fork at Tryon, presented by Lucky Clays Farm, but this go-round he and “Thomas” got the last laugh.

“Everyone’s having a chuckle and making a big deal out of it,” Boyd said. “At the WEG I got the wrong ride in, plus there was a lot of other stuff around it to distract the horse and that wasn’t there today. So it was a little bit easier to get him over [the boat] today, but still it was a good feeling getting over it and I got a big, big cheer from the crowd.”

Boyd says he could distinctively hear Thomas’ owner, Christine Turner, cheering as they cleared the jump, and admits that it felt good to earn themselves some redemption.

Notice the fist pump!! Boyd Martin and Tsetserleg winning the CCI**** this afternoon. What an amazing ambassador for our beloved sport and inspiration to us all! A pleasure to watch! Congrats @boydandsilvamartin @boydmartin007 #goeventing #usequestrian

He says the 12-year-old Trakehner gelding (Windfall x Thabana, by Buddenbrock) has gained a lot of ground in the past year as well. “To be honest the horse, Thomas, is a little bit more seasoned now and a little further on and probably learned a little bit more in the last 12 months, so he feels a lot more seasoned now, so he’s a lot easier to ride,” Boyd says. “He’s not so distracted and I’ve learned how to ride him a bit differently and a bit better, too.”

The pair sat 3rd after show jumping to Liz Halliday-Sharp‘s two rides, Fernhill By Night and Deniro Z. Both her horses picked up enough time faults cross country, 11.2 and 11.6 penalties respectively, to drop to 3rd and 4th, leaving the door open for Boyd and Thomas to commandeer the win. They posted the fastest time in the CCI4*-S division, picking up just 4.8 faults.

Having broken his collarbone at the beginning of February, Boyd got a late start to his season. With Kentucky just around the corner, Boyd wanted to give Thomas a chance to grease his higher gears. “I missed a bunch of events, so I haven’t really had a chance to blow [Thomas] out,” Boyd says. “I didn’t go flat out to be honest, but I thought to myself he needs a good run and a bit of a fitness run, but not to go so fast that you risk an injury or anything like that, and he felt very, very strong around the whole track and was quite fit.”

“He jumped really well and I think we’re in good shape, and I think hopefully he comes through this alright and then we start perfecting his dressage test and still keep an eye on his show jumping, and I’m pretty confident in his cross country. In Kentucky anything can go wrong, it’s a big long track and even a very, very good horse and rider can still have a slip up, so we’ve still got a mission ahead of us.” 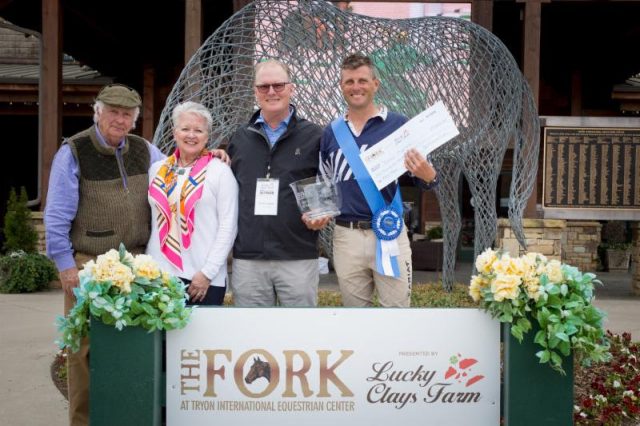 Even with that bigger-picture goal in the crosshairs, walking away with The Fork’s top honor was a nice bonus. “It was good to have a win because we had a bit of an awkward start to the year just sort of bouncing around, a bit injured here and there and missing a few shows,” Boyd says. “It was good to win one, but also good to always remember that some of the best horses here chose to run a bit slow to prepare for Kentucky, so we’ve still got work ahead of us, but he was good and strong in all three phases.”

Boyd had four rides this weekend — two in the Advanced (Long Island T and Contestor, who finished 2nd and 4th respectively) and two in the CCI4*-S (Tsetserleg and On Cue, who finished 15th). Long Island T is also entered at Kentucky, as is Ray Price, who stayed home after winning the Open Intermediate horse trials at Morven Park last weekend.

EN’s CCI4*-S cross country course preview noted that Captain Mark Phillips’ track evoked a distinct sense of déjà vu from the 2018 FEI WEG. The Fork course featured many exact replicas or near copies of combinations from the Games, sans the much-discussed long uphill pull at the end.

“It’s a really, really good track,” Boyd says, who is full of praise for Phillips and his designs. “It’s not as easy to ride as you think just because it’s an old golf course, so there are all these little humps and lumps and the ground is not quite flat, so sometimes it’s a bit deceiving. Especially the galloping jumps — you think you see a good shored-up line and then it changes just a little bit just because the undulation of the ground.

“Being here in September (for WEG) I walked that path of that track so many times, and honestly I reckon I could have walked the course once this weekend and been fine around it. But it was good coming here just with a handful of horses for a few days just to concentrate and zero in on them. I think it’s a great show and a great preparation for Kentucky and a really good show for the young horses to get them ready.” 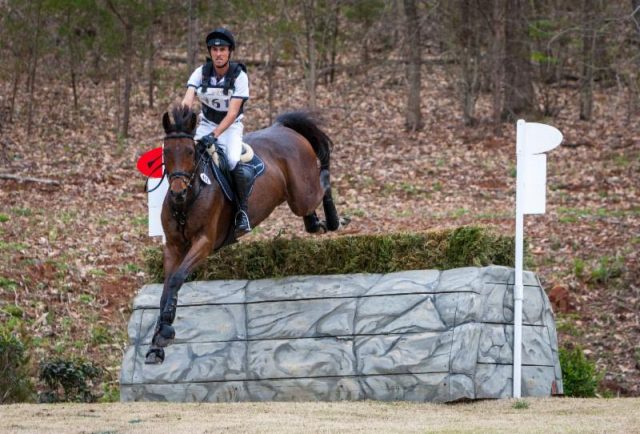 Second-placed CCI4*-S finisher Felix Vogg also headed into the start box today on a WEG redemption mission. He and Colero, an 11-year-old Westphalian gelding (Captain Fire x Bonita, by Bormio xx) owned by Vogg Jürgen, also had a run-out at the boat in the WEG water complex. This time around, Felix says, he gave the horse a better preparation, which led to a much happier result.

Felix and Colero are also entered at Kentucky and feeling pretty well ready. “I think we always have to complain about something, it’s never perfect, but I’m pretty sure he’s more ready for Kentucky this year than last year maybe for WEG. WEG was maybe a little bit early, and I think that the course down here is pretty difficult because it’s so quick and so many things after each other, so I think Kentucky is easier for the horses to do the cross country.”

After Kentucky, Felix will head back to Europe for an event in Poland with Archie Rocks and Cayenne. Archie Rocks also contested The Fork, finishing 3rd in the Advanced division, while Cayenne’s spring calendar included Red Hills and Carolina International. 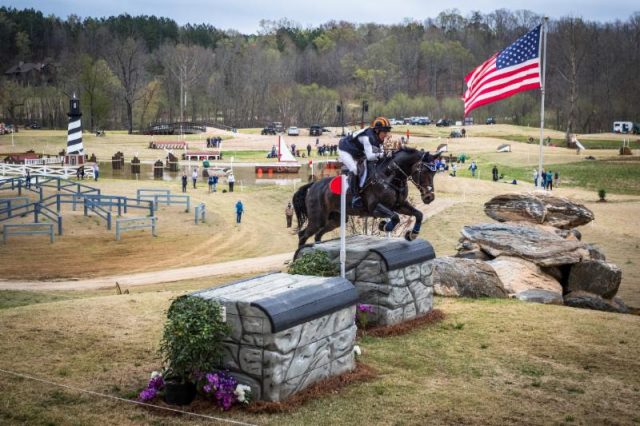 “‘Blackie’ was really, really good,” Liz says of her first horse out, Fernhill By Night, a 16-year-old Irish Sport Horse (Radolin x Argentina XII, by Argentinus) owned by Deborah Halliday. “He got a little bit sort of tired towards the end, but it would be quite an intense course for him. He hasn’t probably done a course that intense for a while, but I was really pleased with him.”

Liz says he was super all the way through the early parts, then got a bit bogged down around the squirrel combination at #22AB, and she chose the easier route through the water because it felt like he was running out of push. “He really tried and he’s not a racing snake, so he did the best he could and the horse really fought for me, so I’m pleased with where we ended up. We did the best we could today,” Liz says.

Liz had specific cross country goals in mind for Deniro Z, an 11-year-old KWPN gelding (Zapatero VDL X Zonne-Trend, by French Buffet xx) owned by The Deniro Syndicate and Ocala Horse Properties, as they prepare for Kentucky later this month.

“He was just so fast at Carolina and a little bit wild, and the plan today was to really put the pieces in place with Kentucky in mind 100%,” Liz says. “I actually heard them announce Boyd’s time when I was at fence seven and I thought ‘I don’t think I’m going to be going quite that fast today.’ But it’s fine. I sort of went out with a plan and I think executed the plan exactly, and I had a super round and he was really ridable and he made it feel easy. I was really thrilled and he finished fresh and never really got out of fourth gear, so it was great.”

Liz says highlights of the cross country course were the water and boat, which she says rode really well, and the table-to-corner combination that she thought was a really great question. “It was a good, strong course, intense and basically what we needed before a 5*, so I thought it was perfect. It was a lot stronger than in previous years and I thought that was necessary,” she says.

The two horses’ finishing times were nearly identical — Blackie had 11.2 time faults and Deniro had 11.6 — despite them giving her their own unique feelings on course. “I was kinda kicking Blackie at the end a bit more whereas Deniro just kind of cruised at that time because he’s so fit and Blackie wouldn’t be 5* fit right now obviously,” she says. “I noticed that and was sort of laughing at myself about how different the rides were — I had to really work on Blackie towards the end and Deniro was just like ‘ya, cool,’ just kinda cruise along, not working too hard, which is nice. That’s how you want them to feel when you’re coming up to a really big event.”

Liz says she thinks Deniro is exactly where she wants him in advance of Kentucky with regard to both fitness and finesse. Between now and then, they’ll do their gallops, practice their 5* test at next weekend’s Ocala International, and then tune their dressage up with Robert Dover the week after.

CCI3*-S competition saw Doug Payne and Starr Witness claim first-place honors on a final score of 33.2. Second went to Will Faudree and Caeleste (38.0); third was awarded to Katie Lichten and RF Luminati (41.1).

In the CCI2*-S, Ryan Wood and Ruby placed first on a score of 37.0, followed by Will Faudree and Mama’s Magic Way in second (37.7) and Ryan Wood with Chusinmyconfession in third (39.0). 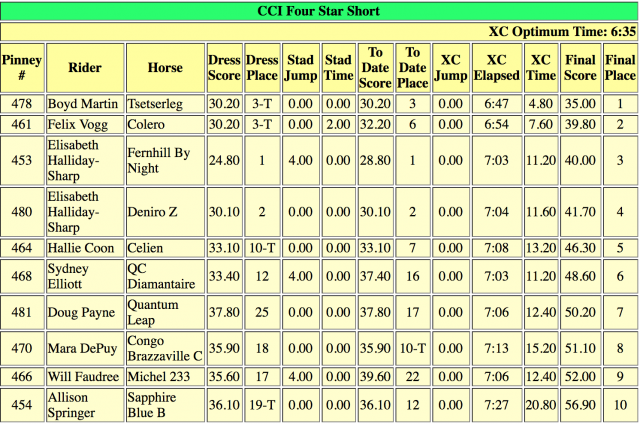 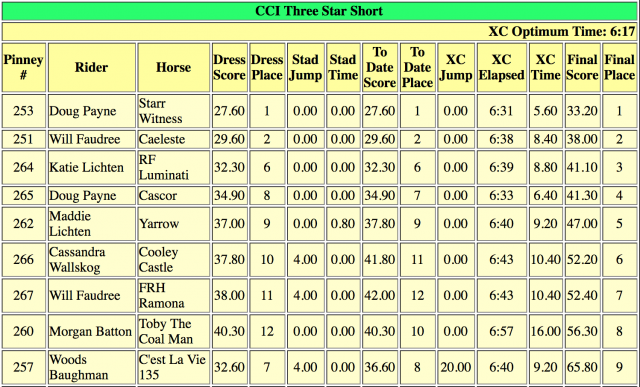 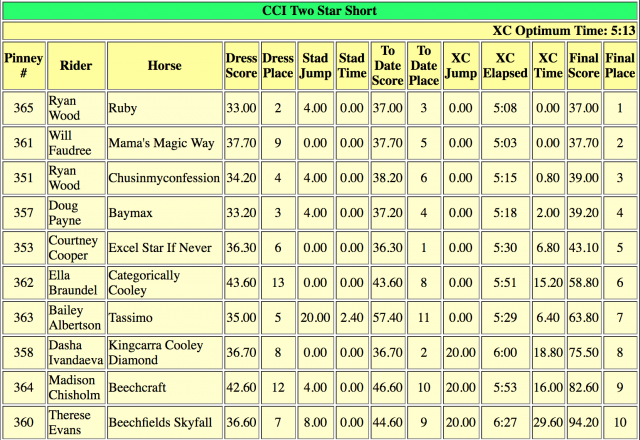