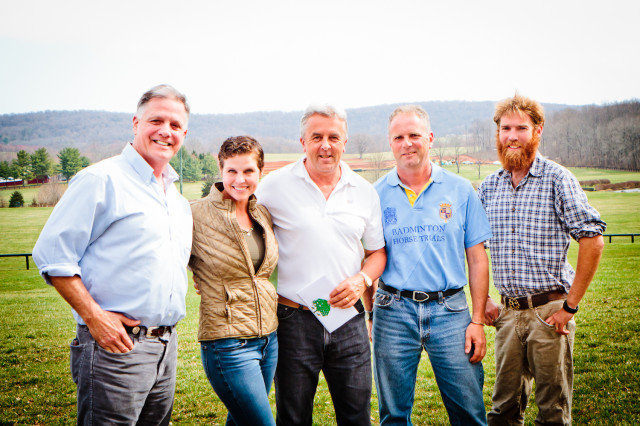 Following the successful debut of his CIC3* course at Red Hills over the weekend, Mike Etherington-Smith headed north to The Plains, Virginia to make his first site visit of the year at the venue that will host the Land Rover Great Meadow International presented by Adequan, the inaugural FEI Nations Cup Eventing leg in the U.S.

“It’s really great to have the Nations Cup in this part of the world,” Mike said. “I think it’s a really positive step for the sport in this country, and well done to everyone involved in making this decision. This is a massive effort on everybody involved and there’s a big commitment here, which is very exciting.”

Both Germany and Great Britain have expressed interest in sending teams to the Nations Cup at Great Meadow, which will be held July 8-10 the week prior to Aachen. The total number of entries will be limited to 40 horses and riders. Each National Federation is permitted to send one team of three or four riders with an additional alternate.

A certain number of slots have also been reserved for the U.S. to send individual competitors as the host nation. The remaining number of individual slots will be filled by riders representing other countries based on their standings in the FEI World Eventing Athlete Rankings. 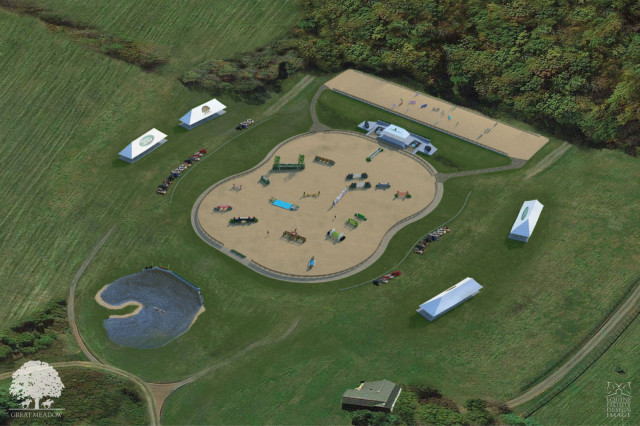 Artist rendering over the new area. Credit to GreatMeadowInternational.com.

Mike said his plans for the CICO3* cross country course are very closely to being finalized. The new 400-by-70-foot warm-up arena and 300-by-250-foot competition ring are nearing completion, and a brand new water complex constructed below the arena will also play a starring role in the course.

“This trip has been about seeing the progress on the arena. The course will go through it and then come back through it to link the two sides of the course together,” Mike said. “I’ve had various ideas about trying to change the line of the course and taking more land on the far side of the property,” but he is also mindful of keeping the bulk of the action in front of the spectators.

Tremaine Cooper is working as the course consultant to assist Mike when he can’t be here in the U.S., and Travers Schick is course builder. “Tremaine will be working with the builders to determine the final way in and out of the arena, for example,” Mike said. “He is my eyes and ears on the ground.”

The CICO3* course will feature 32 or 33 jumping efforts over a distance of about 3,500 meters. The course can be up to 4,000 meters, but Mike said he won’t push for that length considering the timing of the competition in the season and also the possibility of rain impacting the footing. 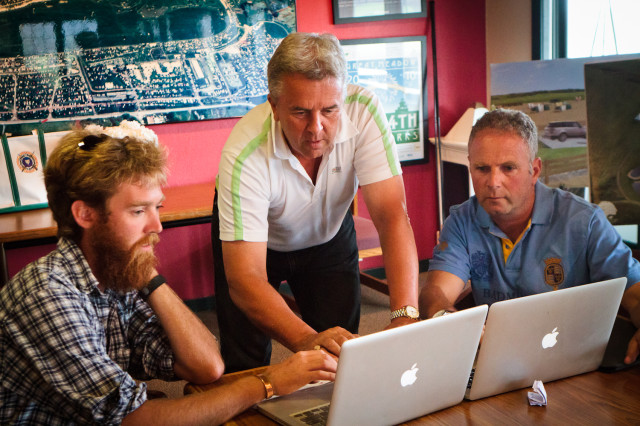 Those who remember last year’s severe thunderstorms that caused flooding in the stabling area and an evacuation of the grounds can rest assured that measures have been taken to ensure proper drainage in stabling this year and prevent that same scenario from occurring should severe weather strike again.

“Everybody has done a lot of work to continue keeping the course beautiful and improving on it. We’ve improved the stabling and the experience for the horses and riders,” Darrin said. “The real hope is that the community will continue to embrace this as they have over the last couple of years.”

Darrin said the organizers have been thrilled to receive more than 120 applications so far for volunteers to assist at the event, and more volunteers are still needed to ensure the first U.S. Nations Cup leg can be as successful as possible. Click here to fill out a volunteer application.

The competition will begin with the first horse inspection on Friday afternoon, July 8. Dressage will start Saturday morning on July 9 and continue through the afternoon, followed by show jumping under the lights that night. Cross country will be held Sunday morning, July 10. Click here for ticket information.

Keep it locked on EN for everything you need to know about #GMI2016. You can also follow the event on Facebook here, Twitter here, Instagram here and check out the website here for more details. Who else is excited for the inaugural FEI Nations Cup Eventing leg held in North America? We sure are!