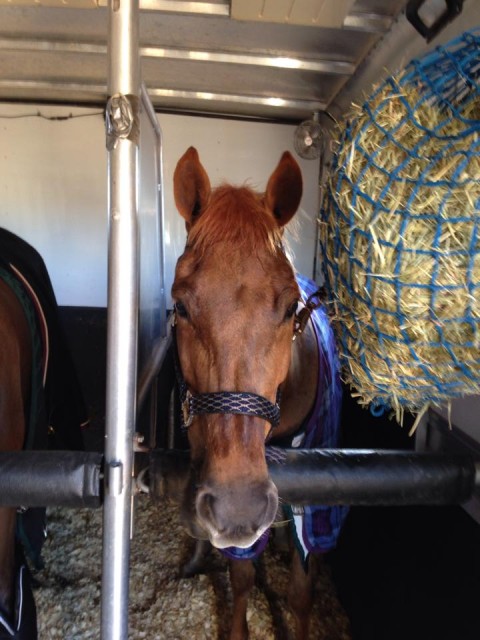 Last fall, we reported Sinead Halpin was taking over the ride on the talented pony Forrest Nymph. Affectionately known as Farrah around the barn, this red-headed pony has plenty of scope and talent to go far; with Sinead in the irons, there’s no telling what the limit is for Farrah. Most recently, Sinead had Farrah out for their first competition together at the Rocking Horse Winter I Horse Trials in Ocala. The pair scored a 30.5 in the dressage and added nothing to that score to finish in seventh overall.

Aside from competing smaller horses when she first began riding at the upper levels, Sinead has not had a lot of experience with ponies. “Maybe when I was 12!” she joked of the last time she had been on a horse as small as Farrah. Farrah’s 14.2-hand stature does not have an effect on the mare’s talent and power, though. “When you’re on her, you really forget that you’re on a pony,” Sinead said. “In fact, the first time I got on her, I thought, ‘Thank God this is only a pony,’ as she is the strongest horse in the barn.”

As is the case with many mares, Farrah thinks of herself as an alpha, and so Sinead has learned that she has to convince the redhead that everything is her idea. “You can never get mad at her,” Sinead said. “Nothing is ever her fault.” Sinead has had fun getting to know Farrah and said once she had her out jumping, she felt much more at home on the small mare. Farrah has a huge stride and an uphill build, so oftentimes Sinead even forgets she’s on a pony. “I had to jump her a few times to get used to the fact that I was looking up at the standards and rails rather than directly at them,” Sinead said.

Sinead has been impressed with Farrah’s bravery on cross country. “She’s a little like (Manoir de Carneville) in that if you don’t get her to the absolute perfect distance, she will still jump as if nothing was wrong,” Sinead said. “Sometimes if you make a mistake, you hold your breath; but in her case, she is pretty game no matter what.”

The plan is to take Farrah out at Preliminary next and then map out the rest of the year from there. Ideally, she will compete at Southern Pines and The Fork, and if this past weekend is any indication, it seems this pair is well on their way to success. Stay tuned for much more from Camp Halpin as Sinead and Farrah continue to get to know each other.

If you want to stay on top of any Farrah updates, you can follow Beth Davidson’s Pony Eventer blog and check out Sinead and Black Dog Farm‘s Facebook pages.