The eventing community continues to mourn the loss of Biko today. William Micklem, who sourced Biko as a 3-year-old in Northern Ireland, sent in this lovely tribute to the horse, who passed away peacefully yesterday at 30. Thank you to William for writing and sharing his memories of one of the greatest horses in U.S. eventing history. 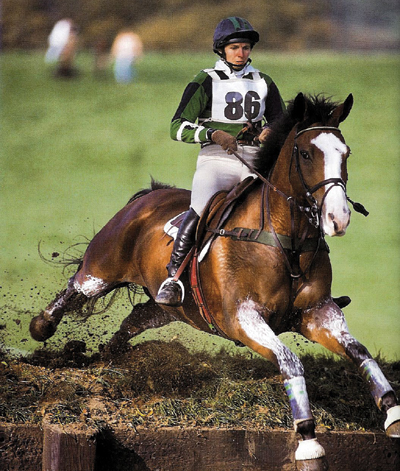 He was a great horse and, with Karen, formed a truly great partnership. She deserves all the credit for fulfilling the potential of a Thoroughbred who I totally adored. My brother John first saw him in Jack Deacon’s yard in Co Wexford. Then I bought him as a rising 3-year-old and remember so well my huge excitement regarding his potential.  As a young horse, I rated Biko the highest I have done for any horse for his physical abilities, as he had the paces, jump and scope that were super special.  I therefore wanted a special name for him and called him Biko after Stephen Biko the South African who lost his life and became a hero in the struggle against apartheid — because of Biko’s big white face!

Even when I worked him as a 4- and 5 year-old, it was obvious that he had the scope and technique to be a real jumper, as well as the paces and gallop to be a top eventer. However, his brain was a different matter, as he took a long time to trust humans and move into the area of acceptance and partnership. He won the Thoroughbred 3-year-old class with me at Dublin show, and I sold a half share in him to Ronnie Duke, the father of one of my students, Sonya Duke. However, Sonya is fairly petite, and he quickly grew too big for her. Although he was 16.1 when I bought him as a 3-year-old, he grew to 16.3 by the time Karen got him two years later. Then two more years on from this, he was 17.3 hands! (This was not surprising, as his full brother was a racehorse with British Olympic event rider Tina Cook’s father Josh Gifford and was called Jumbeau because he was 17.2!)

After being with my brother John as a 3-year-old in Co.Carlow, Biko spent a year with me in Scotland as a 4-year-old at the newly opened Gleneagles Mark Phillips Equestrian Centre and won his first competitions, including a free jumping class. Actually, my wife Sarah was the first rider to jump him under saddle. He really trusted Sarah, but he did leave one or two others on the ground, including Mark Phillips! Then he went to Sonya Duke’s yard in Northern Ireland, where she did her normal terrific training job and started Training level horse trials before I took Karen to see him and told her he was “Olympic.”

I will always regret not keeping him for myself, which I would have done if I had full ownership of him, but there was no one who I would rather have Biko than my old student and great friend Karen, who I knew would have the gentleness and patience to build the right foundations before going into high level competitions — and so it proved. At the front of my book, “The Complete Horse Riding Manual,” there is a magnificent photograph of Biko and Karen going over a bank at speed. I look at it often and still get a huge thrill thinking of their great performances and awesome ability.