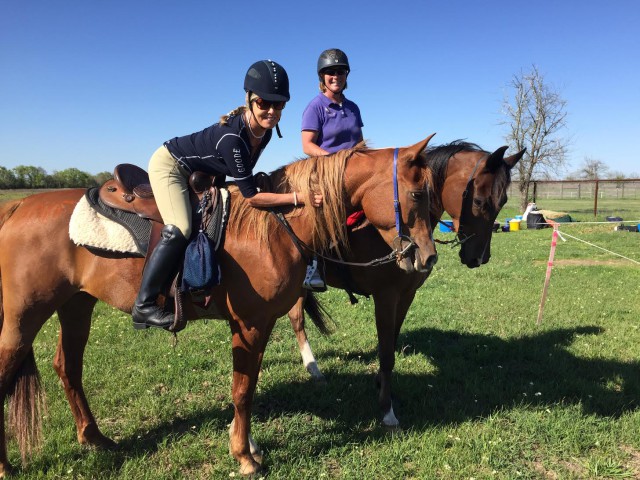 Four-star event rider Hilda Donahue has her sights set on the World Equestrian Games, but not in eventing. Instead of galloping four miles over fences, she wants to trot 100 miles in the endurance competition.

Hilda got her start competing in endurance because her husband and sisters-in-law are avid endurance riders. She joined her family on her first ride one year ago and hasn’t looked back. In fact, she has finished in the top ten in all four FEI rides she’s completed so far and is currently fifth on the FEI World rankings.

“I took to it like a fish to water,” Hilda said. “I really became fascinated and, always wanting to learn more, I just became intrigued by how endurance people condition. I really believe that we can draw from these other sports.”

As an eventer, Hilda was short listed for the Irish World Equestrian Games team in 2002 and rode in the World Cup final at Pau the same year. She’s competed in all but two of the world’s four-star events (missing Luhmühlen and Badminton), and is a familiar face in Area III, always sporting a sun hat and a friendly smile.

“I’m low on eventing horse power at the moment. I’ve been competing students’ horses and sales horses at lower levels,” Hilda said. “I’m just adding on. Anyone who knows me knows I’m a goal oriented overachiever. I got in to the sport [of endurance] due to family connection and fascination and the opportunity to learn more.”

So adding to her list of goals, which includes competing at Grand Prix dressage (she’s currently at Prix St. George) and completing the two four-stars missing from her eventing record, Hilda wants to ride at the prestigious 100-mile Tevis Cup this August and eventually qualify to ride for Ireland in endurance at the 2016 World Equestrian Games.

“I don’t feel too impressed with myself or too confident saying that. I need to have goals, and the only failure is not trying.”

It’s no secret that endurance has received quite a lot of negative press recently, from accusations of horse abuse to the suspension of the United Arab Emirates by the FEI. Hilda admits to being skeptical as she tested the waters in this new sport, but after 15 rides she stands by the friends she’s made and the discipline she has grown to adore.

“I’ve only seen the utmost of horse care and welfare of the horse being of paramount importance,” she said. “Everything I’ve seen over here impresses me. It’s all about the horses … what a wonderful group of people. They love their horses, they’re hard working, very hands on, and have a great sense of humor.” 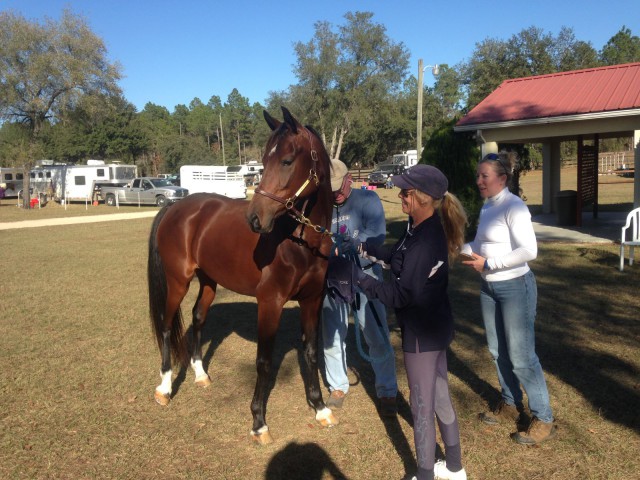 Hilda at a pre-ride vet check, where attire is less formal than at three-day horse inspections but more thorough in terms of recording vital signs and the horse’s physical and mental state. Photo courtesy of Hilda Donahue.

Being an experienced eventer, Hilda has high standards of horse care. Yet her experience in endurance has taught her even more about conditioning, nutrition, and horsemanship.

“I’ve become an even better listener to my horse. Now when I’m schooling horses I pay better attention all around,” she said, noting the heat and humidity present now in Florida.

“I have a phrase when I’m teaching: pay attention to what you’re paying attention to. Arabians and endurance riding have heightened my need to do that.”

The Arabian breed has captured Hilda’s heart as well through this experience. She likens them to event horses because they have one very important characteristic in common – heart.

“When you have to call upon something extra, the horse has to be willing to give it to you. When you’re at mile 82 and it’s pitch dark at night, you know he’s tired, and he offers you that last little bit. It’s like the 10-minute mark around a four-star course. It’s up to the horse to give it to you. You can’t force it.”

A Strategic Test of Horsemanship

“Most people, of course, start with a simple 25 miler. They call that a limited distance ride. No, Hilda got signed up for the Virginia City 100,” Hilda laughed, recalling her very first endurance ride one year ago.

As a newcomer to the sport, she did not have a proper endurance saddle, so she rode in her Voltaire English saddle, even on the 100-mile rides. At the holds, she will change the length of the stirrup for a different feel or change the stirrup altogether.

Though she is typically the only one riding in an English saddle, she never feels tired or sore using this unusual equipment. “Keep in mind an Arabian is a small breed of horse and quite narrow. I’m not on a strapping warmblood with lots of suspension.”

She still quite happily uses her Voltaire at national rides. On the FEI rides, however, she is required to use an endurance saddle and must carry extra weight on her body to meet the minimum weight requirement.

The horses do very little cantering and almost no walking when on a ride. Cantering may be done to use different muscle groups, but the trot is the most efficient gate for a horse to travel, Hilda said. And the pace is necessarily quick.

The goal on a 100-mile ride is to complete the track in close to 12 hours with five or six 30-60 minute holds along the way. Veterinary checks are completed at these holds, and the criteria is strict.

“Not only does your horse’s temperature, pulse, and respiration need to come down to an acceptable level, but you have a ride card that the vet has to fill in to his satisfaction with things like gut sounds, capillary refill time, skin tint, the horse’s attitude,” Hilda said.

“At the pre-ride vet check, which would be like our first horse inspection, if the horse has a happy expression, ears pricked, looks likely, and comes into a hold pinning his ears and swishing his tail, they will eliminate you for that. And for tack rubs, too.

“You have to start the ride with a certain body condition score. They cannot be really thin or grossly overweight. They won’t let you start.” 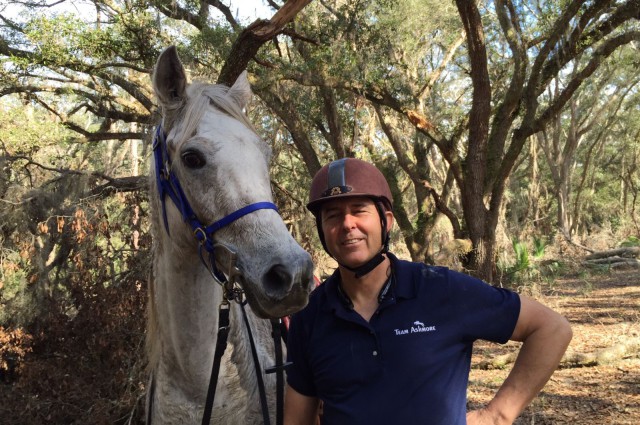 Hilda’s husband Ken McKenzie, who has completed the Tevis Cup and is a recipient of the Virginia City 100 Best Conditioned Award. Photo courtesy of Hilda Donahue.

On the ride the horses must be surefooted and agile, with a similar “fifth leg” eventers look for in a good cross country horse. When terrain is especially challenging, like at the Tevis Cup, where you climb 18,000 feet and descend 21,000 feet, the horses must be able to pick through the path set before them. To help protect their feet, they wear specialized shoes called sneakers. Thick and rubbery, they provide traction and shock absorption.

To prepare the horses for the challenges they face on a ride, they are conditioned over long, slow distances, much like eventers in the days of the long format. Much of the conditioning happens at the competitions themselves. For example, a horse may start the season with a 25-mile ride  and build up from there. They will have several days off after a long ride and then do 10- or 15-mile trot sets a few times week until the next ride.

At a competition, the top ten finishers may present for best conditioned, but these presentations are not the same as horse inspections at events. There are no frills and no best dressed awards. “There’s no hoof oil, Show Sheen, or braiding … It’s just good old fashioned horse care.”

Hilda has not yet purchased an Arabian of her own, but she is building relationships with the ones she rides for their owners.

Patrick’s Fire, owned by her sister-in-law Sharon Finston, is not the easiest ride. “He’s deposited many people on the ground many times!” Yet he’s quite special to Hilda. On April 4 they placed second in the 100-mile Nevada Derby out of 75 riders.

Cheryl van Deusen is the current number one endurance rider on the FEI rankings, and she breeds Arabians for the sport. Hilda has enjoyed riding many of of Cheryl’s homebreds, but the one that she has a strong connection with is an 11-year-old chestnut mare called Spotless Summer Magic. They finished second at a 100-mile FEI three-star ride in Texas March 28.

No matter how exciting the idea of qualification may be, however, the horse’s welfare comes first and foremost.

Hilda extends a special thanks to her sponsors Tredstep Ireland, Voltaire Design and Thinline. Visit Hilda’s website to learn more about her equestrian endeavors! 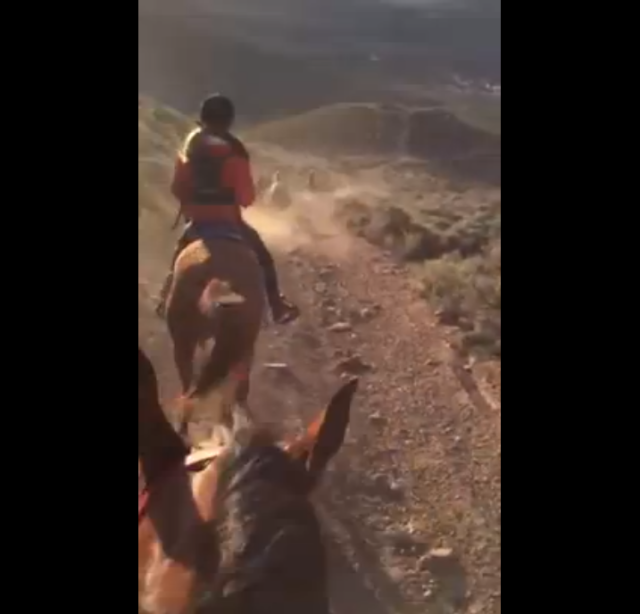 Click the image to see video of the incredible view at Hilda’s recent ride in Nevada.