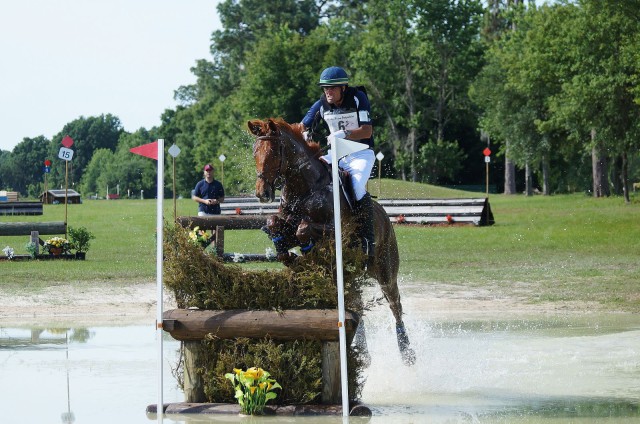 Being that the CCI2* at the Ocala Horse Properties International Festival of Eventing in Florida is a selection trial for the U.S. Pan American Games team, it was important to produce confident clear rounds on cross country today. The course, designed by Jay Hambly, certainly tested the competitors, and the leaderboard was significantly scrambled.

Kyle Carter and his 9-year-old Dutch Warmblood/Thoroughbred FR’s Trust Fund, a Carter homebred EN talent spotted two years ago, produced a near foot-perfect round, crossing the finish one second under the optimum time to move into the lead in the CCI2*. He scored a personal best in dressage yesterday, scoring a 40.3 for second place after the first phase. A good performance tomorrow will surely put them in a position to be named to the Canadian Pan Am team.

Less than a rail separates the top five in the two-star, so tomorrow will be an exciting conclusion. Marilyn Little posted two double-clear rounds on Raylyn Farms’ RF Indie and Raylyn Farms and Phoebe and Michael Manders’ RF Scandalous, who move into second and third place respectively. Buck Davidson and Ann Clements’ Quasar, tied for sixth after dressage, was also double-clear to move up to fourth. Jennie Jarnstrom and her own Penelope round out the top five after a bold round moved them up from tenth. 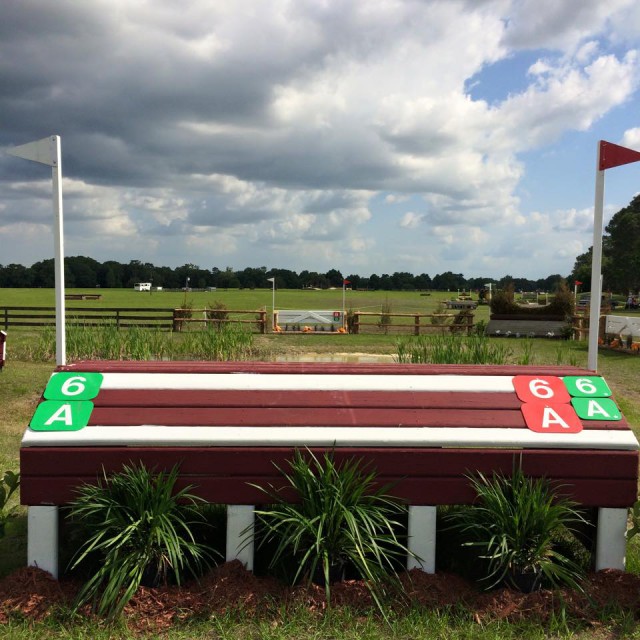 This is the first water on the CCI1*/Intermediate course. The CCI2* jumped a similar set of fences. Photo by Siobhain O’Connor.

The angled brushes proved to be one of the trickiest combinations on course. Coming up after a big table, the AB combination rode best when riders kept coming boldly forward, but the line required accuracy and many combinations glanced off the first element entirely or backed off and got too close, which threw them off their line for the second element.

The first water was another complex to catch out several pairs. It looked to be fairly spooky and a bold approach was generally rewarded with a good ride over the house into the water and out over the bright white upright. Both Caroline Martin on Roller Skate and Briggs Surratt with Hat Trick retired at the water after two stops, and poor Victoria Clayton, who was attempting a qualification for the NAJYRC, parted ways from The Secret Agent after he refused the first element. Thankfully she and “Jackson” are both okay.

The second water complex was the most influential of all, with riders jumping over a log, one stride down to a down bank, and four strides taking them through the water to a set of skinny brushes separated by two strides. Overnight leader Kim Severson and Cooley Cross Border and Michael Pollard and Cyrano glanced off the first brush, and Will Faudree retired Caeleste here after a big jump into the water that made getting to the skinnies tough.

Tik Maynard and Sapphire received an MR according to live scores. They looked great early on course but their fall was not shown on the live stream. Tik rode his other ride Dutch Times later in the day so we have to assume he’s none the worse for wear. We have no word on Sapphire’s condition, but we’ll update you with any information we receive.

Out of 70 starters in the CCI2*, four withdrew before cross country and 18 retired on course, leaving 47 to appear at the Final Horse Inspection tomorrow. What’s Up Media will be streaming the show jumping live starting at 10:30 Sunday. Stay tuned for an afternoon update on the one-star cross country in this post. 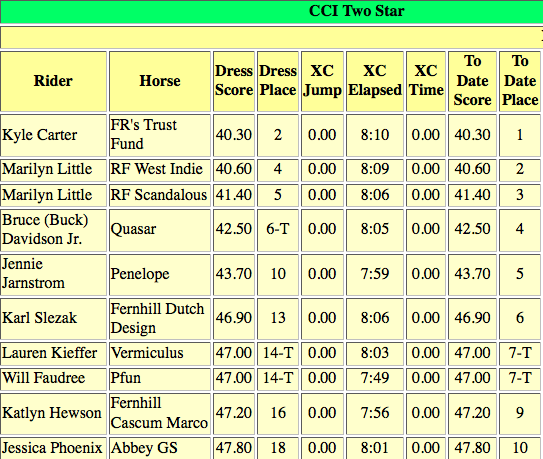 Scoring a 37.0 in dressage, RF Overdressed and Marilyn Little headed out of the startbox today at the top of the field of 80 starters. The optimum time of 7:07 was easy to obtain, and they crossed the finish well under the time to hold the overnight lead.

They do not, however, have any breathing room tomorrow, as Phillipa Humphreys and her and Peter Humphrey’s Master Eli are second in their first CCI1* together on a score of 37.8.

Helene Emond and RF Chigoletta are third. Helene, riding for Sweden, is enjoying her first competition season in the States. She and the 8-year-old KWPN mare finished 14th in the CIC1* at Carolina International a few weeks ago. Today they jumped double clear in Florida to move up from fifth to third on a 40.8.

Buck Davidson and Legion Kat are fourth after cross country with a 41.1. Makenna Rold and Fernhill Imperial were clear but picked up 3.2 time penalties, dropping them from third to fifth. 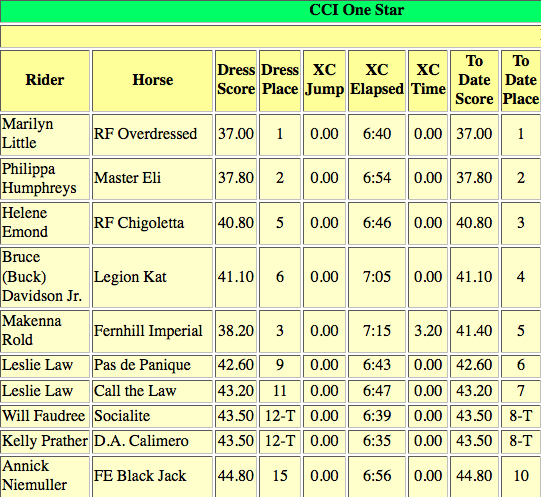