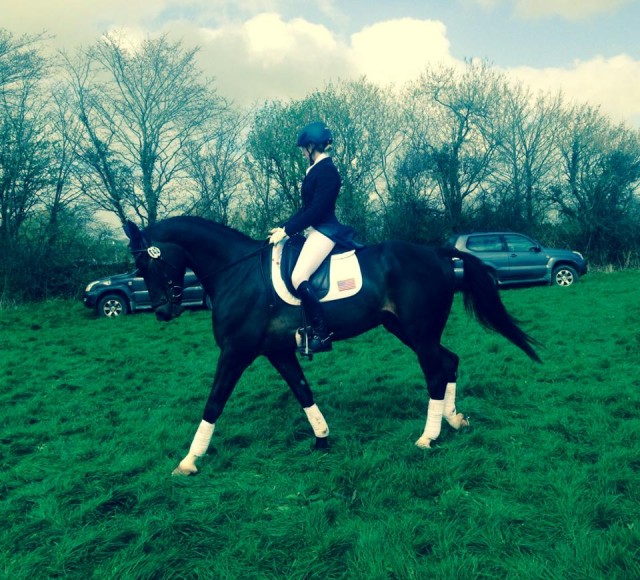 Liz Halliday-Sharp and Fernhill by Night at Ballindenisk. Photo from Liz's Facebook page.

The Irish leg of the Nations Cup is being held at Ballindenisk this weekend, and the French team came out to play in the dressage and show jumping yesterday. Currently, the French team leads on a total, top 3 score of 130.2 after show jumping, followed by Great Britain and Ireland. There is still plenty of room for things to shake up a bit, as 18.4 points separate first from third right now. 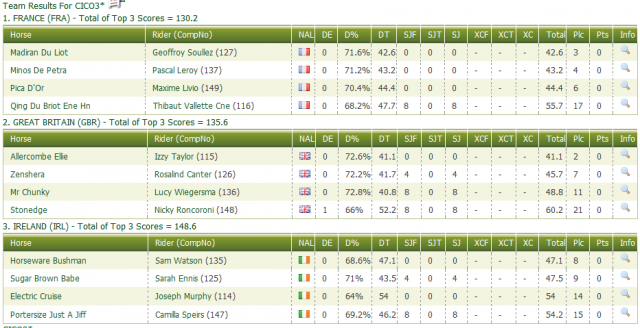 In the individual competition, Oliver Townend is leading the CICO3* aboard Cooley Master Class, a 9 year old gelding who is relatively new to this level. This pair won the dressage decisively and show jumped double clear, scoring a 33.6 to top the leaderboard ahead of Izzy Taylor and Allercombe Elle, who sit in second on a 41.1. Ollie also leads the CCI2* with Shearwater Touchingwood, a horse who is making his CCI debut.

U.S. riders Liz Halliday-Sharp and Julian Stiller are each riding a handful of horses this weekend at Ballindenisk. Liz has three rides in the CICO3* and Julian Stiller has one. Liz is currently sitting in fifth after show jumping double clear aboard her lovely Fernhill By Night. Liz commented on her Facebook page that the ground was quite sticky for the dressage, which leads me to believe that her score may very well have been much lower in better conditions. Nonetheless, Liz is still in a great position to contend for the lead on cross country today. Liz also rounds out the top 10 aboard HHS Cooley, adding just one rail down in show jumping. Liz’s final three-star entry, Red Letter Day, also jumped double clear in show jumping and sits in 24th going into cross country. Julian’s Charlie Weld had three down in show jumping, and they will sit in 34th after the first two phases. Past results would indicate that show jumping is not this horse’s favorite phases, but his last two events out he turned in clear cross country rounds, so I’m sure Julian is looking forward to running and jumping today.

Stay tuned for more from Ballindenisk, but in the meantime here is a quick write-up on Saturday’s action.