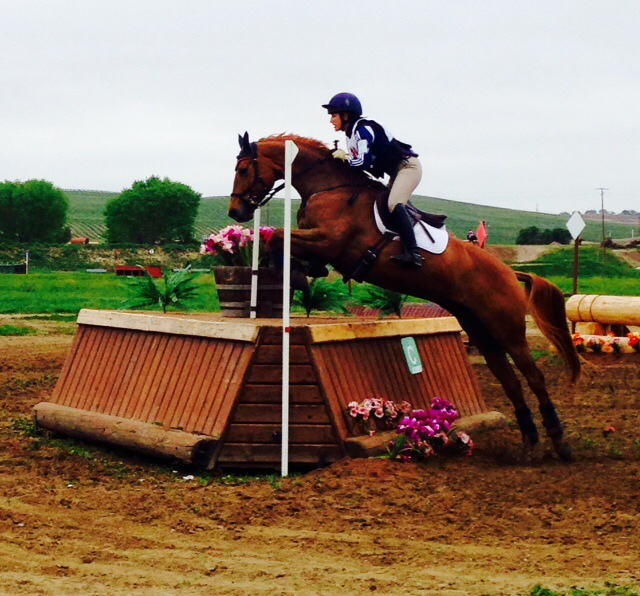 Lauren Billys and Jitterbug in the CCI* at Twin Rivers. Photo by Emilee Libby.

Derek di Grazia’s cross country courses at Twin Rivers are riding just as expected this weekend: challenging and appropriate for the level and time of year. Matt Brown on one of his three-star first timers, BCF Belisco, secured the win in the CIC3*, moving up from first to second with a round just a hair faster than overnight leaders Lauren Billys and Ballingowan Ginger. Matt was quite pleased with both of his horses’ efforts. “We came into the weekend just wanting to have a good outing and finished with confident horses. It’s great to get their first three-star under their belts, and to come away with first and fourth is just icing on the cake,” Matt said. “We definitely have a lot more to work on, but I think this was a great result. Derek (di Grazia)’s course was a proper course with real good questions. In true Derek fashion, it always seems like he is trying to set you up for success with questions early on that are doable but set you up for more difficult things to come.” Matt will prepare his horses for Woodside next, followed by Rebecca Farm. I was thrilled for Lauren and Ballingowan Ginger and plan to try to catch up with her this weekend so talk about her lovely horse as well. 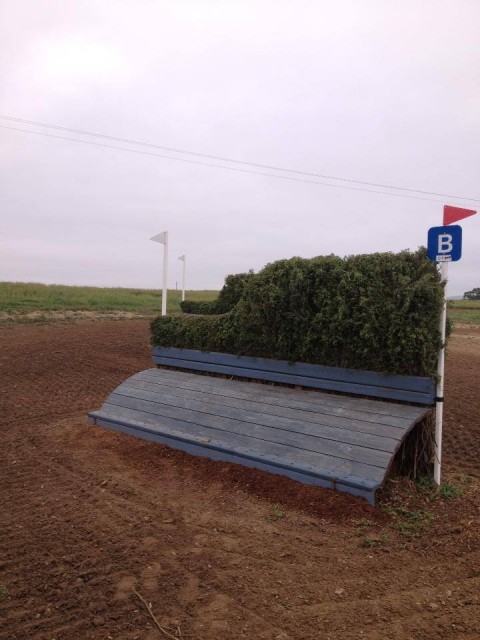 Fence 10BC on the CIC3* course. Photo from Jordan Lindstedt’s Facebook page.

The CIC3* course claimed a couple of victims: Emily Pestl-Dimmitt and Arlington retired on course, and Natalie Rooney fell from Jefferson at fence 15. A few others picked up 20s, and fence 10 seemed to be the fence that caught the most riders out. Jordan Lindstedt posted a photo of 10BC on her Facebook page earlier, saying that the angled brushes came after a sharp right turn from a hanging log on a hill. I’m not sure whether or not the runouts came at the B & C elements or not, but this gives you a general idea of what riders were facing at this point on course.

In the CIC2*, the leaderboard remains unchanged after stadium jumping.

In the CCI*, the cross country looked to ride extremely well for most riders, with only a handful picking up refusals and two being eliminated. The leaders all went double clear and the leaderboard still looks tight going into cross country.

At the Ocala Horse Properties International HT, Michael Pollard will maintain his lead after a double clear cross country aboard Halimey. Leslie Law and Tout de Suite and Elinor MacPhail with RF Eloquence bring up the top three. Overall, the two-star cross country ran smoothly today, but four riders retired on course, there was one rider fall, and one pair was eliminated. For the most part, time penalties were the biggest score changer today.

I spoke with Michael briefly today, and he was quite pleased with how the course rode. “I thought it looked a bit tough actually, but it rode really well. If the horses were jumping well, the time was pretty easy to get and I think that made a difference because everyone wasn’t rushing or pushing for the time.” Michael and Halimey have been working through some confidence issues, and a year ago Michael thought that running Preliminary on the Trakehner stallion was difficult, but he’s taken his time and let the horse let him know what the next step should be. “He’s really getting to the point where he’s trusting me to put him in a good spot, and I think in another six months he will start really going for it on his own. He’s such a talented horse, and if I can continue on this path and don’t rush him too much I think we could move up later on.”

In the CCI* divisions, many pairs were able to move up the leaderboard considerably after clean and fast cross country rides. Elisa Wallace and Corteo ran a smoking double clear round to move up from sixth to second in the CCI*-A division after cross country, and Elisa commented on her Facebook that she was positively thrilled with Corteo’s performance today. Kelly Prather and D.A. Duras also moved up, leaping from seventh to third, after also going double clear. Overnight leaders Julie Richards and Fernhill Splash will hold the lead going into show jumping after a double clear round as well.

Twin Rivers and Ocala both wrap up tomorrow, so stay tuned for more updates. As always, don’t forget you can send your photos or videos to [email protected].