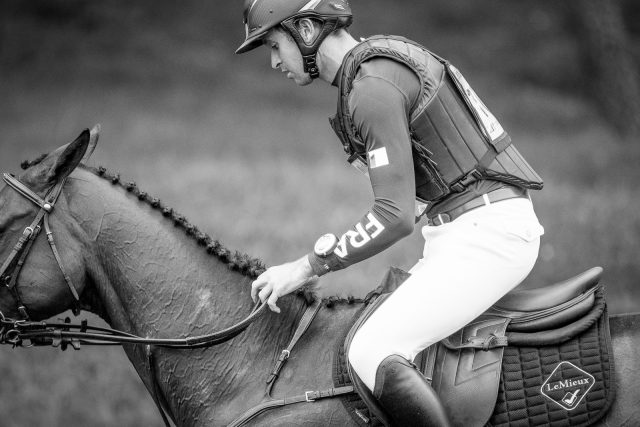 French riders’ spring competition plans have been put on hold by an outbreak of EHM in Spain. Photo by Tilly Berendt.

The Fédération Française d’Equitation (FFE) has announced that all national and international competitions, training clinics, and equine gatherings have been suspended until March 28. The decision to lock down the country’s equestrian industry comes in response to an outbreak of equine herpesvirus 1, also known as EHV-1 or rhinopneumonia, which began at Spain’s CES Valencia Spring Showjumping Tour.

It was reported yesterday by World of Showjumping that two German horses had died after contracting the neurological form of the virus, the first cases of which had appeared the week prior, prompting the cessation of several classes. But in this, the fourth week of a seven-week circuit, the stakes were high: the horses on site had travelled from around the continent to compete at the show, and fears that infected horses had already been unknowingly removed from the show ground ran rampant. As of yesterday, a spokeperson for the Tour confirmed that 150 horses were still on site, with 72 showing clinical signs of the virus. At the time of the statement, 47 horses had undergone testing, with 17 confirmed to have contracted EHV-1. Additionally, four horses that had left the venue on February 14 fell sick shortly after returning home, while two further outbreaks in another country could be traced back to the Tour.

The FEI and Valencia are working in tandem to control the spread of the virus, with additional veterinary support supplied to the locked-down show ground and an FEI entry ban placed on any horse who competed at Valencia from February 1 who has not undergone testing for EHV-1 – a total of 752 equines. Additionally, caregivers have been reminded that transporting a sick horse is a violation of EU transport legislation unless, of course, the animal is being moved to a veterinary facility. As such, all horses must be asymptomatic and temperature-checked before travelling out of Valencia’s isolation unit.

“In order to control the development of an epidemic of EHV1 (rhinopneumonia) after reports of numerous cases at competitions in Europe, the FFE has decided to suspend from today [March 1]  until Sunday, March 28, 2021, all national and international equestrian competitions, equestrian gatherings and workshops organized or placed under their auspices,” said the FFE in a statement released on their website and social media platforms.

“We will regularly inform you of the evolution of the epidemiological situation. We renew our call for vigilance and respect for good practice in order to resume all activities as soon as possible in an already heavily disturbed calendar. At a time when only professional training sessions and competitionsare being held, up-to-date vaccinations against this disease remain recommended for exposed horses.”
WHAT IS EHV-1?
Equine herpesvirus type 1, or rhinopneumonia, is a relatively common respiratory condition that’s spread through horse-to-horse contact. But this doesn’t necessary mean the horses need to be in close enough proximity to touch noses – aerosol droplets or nasal discharge can contaminate surfaces, such as grooming tools, buckets, and even clothing and hands, spreading the virus quickly and efficiently among a number of horses. For this reason, it can become hard to control very swiftly – particularly as carriers may not show any symptoms while actively spreading the virus over its 2–10 day incubation period.
Although EHV-1 can lead to abortion in pregnant mares or ongoing respiratory issues, it’s a largely innocuous virus that an enormous amount of horses will come into contact with at some point or another. So what makes this outbreak different? Simple: it’s the progression into a neurological form of the disease, known as Equine Herpesvirus Myeloencephalopathy, or EHM. This progression happens when EHV-1 progresses into the bloodstream, causing inflammation in the microvasculature. This, in turn, can restrict blood flow to areas of the spinal cord, leading to neurologic disease.
EHM is a very rare and incurable form of EHV-1, which can show up in a multitude of ways: some horses may experience a biphasic fever, which has two ‘spikes’, a sudden lack of coordination, limb weakness, loss of balance and inability to stand normally, inability to urinate effectively, or depression. Though there’s no cure, EHM-positive horses can be administered NSAIDs such as bute or banamine to reduce fever and pain. Some horses do go on to recover from EHM – often with lingering neurological deficits – but the fatality rate is high at 30%.
Though there’s no vaccine for EHM, it’s most often caused by EHV-1, so ensuring your horses’ vaccinations are up to date is the most effective way of protecting them against an outbreak. Implementing a robust quarantine strategy when introducing a new horse to your property, too, is essential: keep the new horse separate for ten to fourteen days, limiting the number of people who have access to it and ensuring that all tools and clothing are thoroughly disinfected, and hands washed, before coming into contact with another horse.