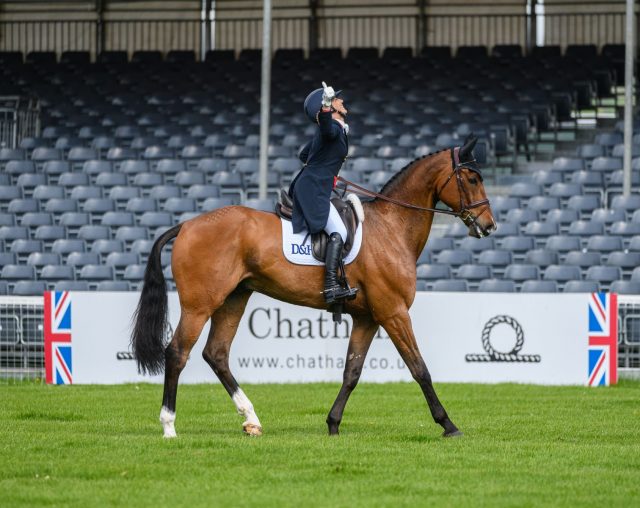 Laura Collett and London 52 deliver their best-ever five-star score to take the lead at Badminton. Photo by Nico Morgan Media.

“It’s not often you go into the arena at Badminton and have a lovely time, but that horse is just so nice to ride,” says Laura Collett, smiling through her tears after storming to the lead with her Tokyo partner London 52. Their score of 21 didn’t just eclipse yesterday’s leaders, Tokyo teammates Tom McEwen and Toledo de Kerser, by 2.4 points — it’s also Laura’s best-ever five-star score of her storied career.

Of course, it comes as little surprise to see excellence from this partnership, who have consistently delivered low-20s marks over the past number of seasons, winning Pau CCI5* in 2020 on a record-breaking finishing score of 21.3 and dipping as low as 20.3 at four-star. But the standard of this field means that even the very best need to bring their A game to stand a chance of moving into the top ten — and when they received their first 10, for their expressive, fluid, and powerful extended trot, it became very clear that that’s exactly what Laura and ‘Dan’ were en route to do.

“This is what we all dream of,” says the rider, who worked swiftly to overcome a slightly underpowered initial entry, which earned them a 6, 6.5 and 7: “H tried to stop at X instead of I, so was a little bit halfway. So there were little bits [that could have been better], but there’s always little bits until you get to [a score of] zero.”

Laura is another high-profile competitor to pare back their schooling regime ahead of this event with the intention of keeping their horses fresh and expressive in this phase.

“We’ve completely changed what we do. I hold my hands up — I messed up in Tokyo,” says Laura, who posted a slightly higher than expected 25.8 with the gelding at the Olympics. “But you can only learn from your mistakes, and I thought, I’m coming here to be brave and stick to my plan. I haven’t once gone into a dressage arena this week, and we’ve just done a lot of hacking and a lot of pole work, because he knows all the moves. It’s just about keeping him with me.”

Though we’ve seen so many horses back off in the atmospheric arena, showman Dan thrived on this busy second day: “It’s so quiet outside, and then you go in there and suddenly you feel it,” says Laura. “But he didn’t react to the crowds — I think he likes showing off! He’s a funny horse to ride at a one-day event now, because he just thinks it’s completely pointless and he bobbles around with his ears back feeling very grumpy about the whole thing. He’s always wondering where all the crowds are, and the nice arenas — so I think he’s pretty happy to be here, and for us, it’s great to be back at Badminton with the crowds.” 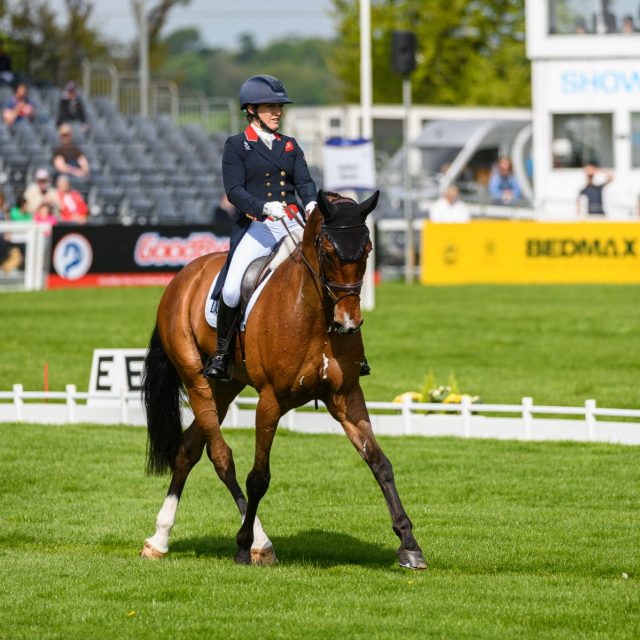 Laura Collett and London 52 dance to an exceptional 21. Photo by Nico Morgan Media.

Nobody else would venture into the top ten throughout the morning, though a couple of Badminton first-timers made excellent efforts to sit close at hand after the morning session. France’s Gireg le Coz and his five-star debutant Aisprit de la Loge moved into eleventh place on 26.7, just two-tenths of a penalty behind tenth-placed Nicola Wilson and JL Dublin, after delivering an elegant effort that lead the way for today’s considerable French effort.

“He’s been very tense the last few days, so I was a bit worried,” says the rider, whose Badminton ambitions began in 2014, when he based himself with Australia’s Sam Griffiths. Sam went on to win that year’s running of the event, and despite its famously tough conditions that year, the thrill of the place stuck with Gireg. Now, eight years on, he returned to Sam’s yard in Dorset for his final few weeks of preparation with the exciting Aisprit. And in his final preparations on the day itself? He opted to keep things as simple as possible.

“I decided just to lunge him before and not come up here, because he gets nervous. But then he was quite with me, and I think my warm-up was quite good,” he says. Though he’d worried about the buzzy environment in the main arena, he was pleasantly surprised to discover that the arena actually felt like something of an oasis of quiet.

“I was a bit worried about the applause for the rider before me, but actually, there wasn’t much, so that was okay — and because the arena is quite big, it doesn’t feel so close, anyway. So it was really just him and me.” 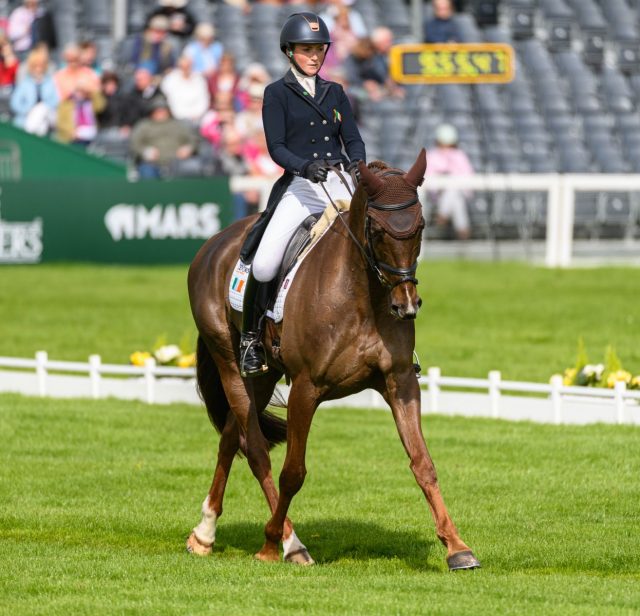 Susie Berry and John the Bull go sub-30 and sit 14th at the lunch break. Photo by Nico Morgan Media.

Irish five-star first-timer Susie Berry was teary-eyed with delight after a very grown-up effort from the eleven-year-old John The Bull earned them a 28.8 and put them into fourteenth place at the lunch break. The former stable jockey for 2019 champion Piggy March inherited the ride on the son of Luidam from fellow Irish rider Jonty Evans in 2018, and has delivered some excellent results, including third place in Blenheim’s CCI4*-L last autumn and sixth in a CCI4*-S class at Little Downham in 2020.

“He’s fabulous on the flat, but he’s been a little bit inconsistent since Blenheim last year, so I’m glad to come to a three-day and have the time to do him properly,” she says. Though their scores dipped slightly in three of the four flying changes, much of the work delivered was mature beyond their years. 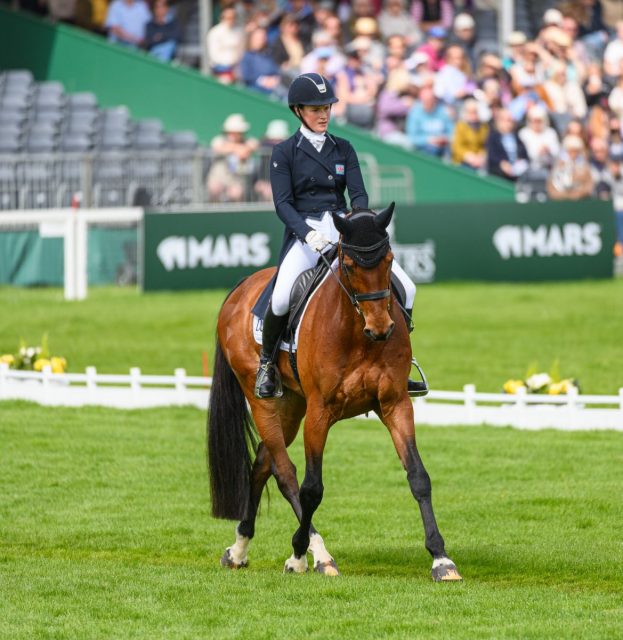 Bubby Upton and Cola put themselves in a close spot to climb after the first phase. Photo by Nico Morgan Media.

23-year-old Bubby Upton has come to her first Badminton with considerable hype behind her: the under-25 national titleholder was excellent in her debut at Pau last year with Cola, and has consistently proven herself amongst Britain’s fiercest competition. Perhaps more impressive is the fact that she’s done so, and built up a prolific and consistent string of horses, alongside attending Edinburgh University. That’s required late nights in lorry parks committing to exam revision while her fellow young riders unwind after a long day, and it’s also meant that she spends a considerable amount of time flying back and forth between university and the yard.

Though her first-phase mark of 30.4 might not be quite what she’d hoped for, it’s still enough to put her into 17th place for now, and fourth-best of the Friday morning competitors.

“I kind of anticipated him going in there and going a bit like, ‘wow!’ at the atmosphere, so I gave him five minutes extra than I normally would,” she explains. “And actually, he kind of went in there and thought it was the arena at home, which is great in so many ways, because it shows that whatever the atmosphere, he doesn’t care — but it just mean that then he went in and was a little bit hard work and a bit flat and not really flowing with me like he would have been if I’d done five minutes less.”

Consistently excellent marks through the first half of the test were slightly marred by lower ones for mistakes in the flying changes. Though Bubby’s an undeniable perfectionist – “I won’t be satisfied until I’m in first after dressage,” she says – she’s also trying to enjoy the enormity of what it actually means to be at Badminton as one of Britain’s brightest young stars.

“I kind of didn’t really take it all in until the end of the test — I went in and was really focused on my plan and what I had to do with him. But what a fantastic place! It’s just a privilege to be here, to be honest.”

We’ll be back this afternoon with a full report from today’s action and a catch-up with our North American contingent, plus plenty more live updates from Sally and much, much more besides. Keep it locked on EN and as always, Go Eventing! 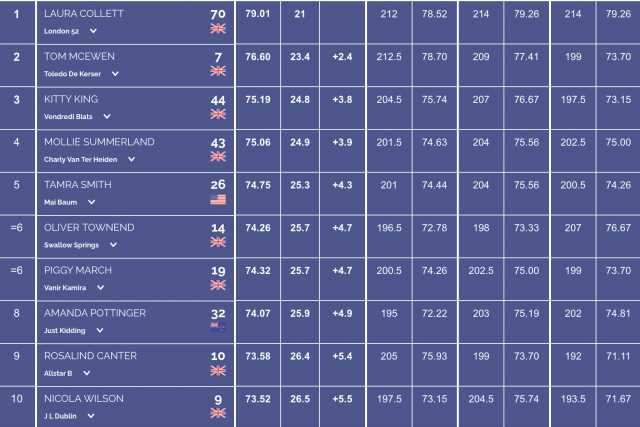 The top ten is largely unchanged after the morning session on Friday – except, of course, for where it counts.