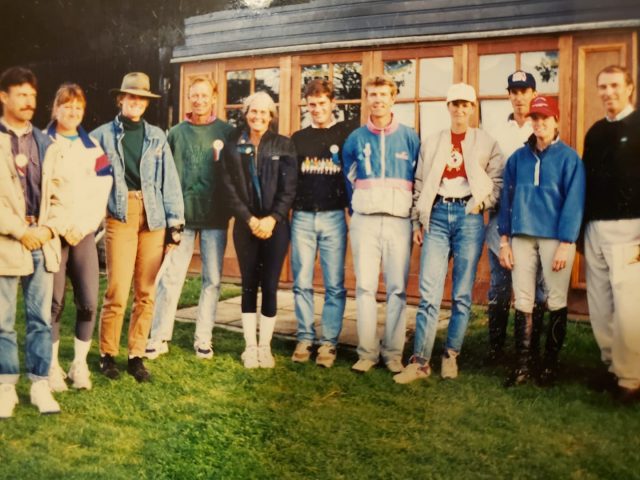 Flashback Friday, can you name them all? Photo courtesy of Dorothy Crowell.

I love a good flashback photo, and Dorothy Crowell provided the perfect one to head today’s news post. The hardened gang of 90’s fashionistas above were all preparing for the 1994 WEG by training in England. Left to right, this photo includes Michael Godfrey, Marcia Carabelle, Dorothy herself, Bruce Davidson, Louise Merriman, Stephen Bradley, Jim Graham, Jill Walton, David and Karen O’Connor, and Mark Phillips. Did you guess the right names?

As the first American to ever win CHIO Aachen, Will Coleman certainly has earned a little rest. However, he has returned to the states to prepare for the upcoming Maryland 5*, and in the meantime getting interviewed by everyone who can track him down. Nicole Brown managed to chat with him for a whole podcast, and they relive the glory of Aachen, talk about his daily motivation in training horses, and also offer listeners a chance to name his baby on the way!  [When Nicole Met Will]

The USEA has announced that Cole Horn’s MBF Cooley Permission To Land is the 2021 recipient of the Holekamp/Turner Grant and The Dutta Corp. prize! MBF Cooley Permission To Land (Cobra x Deeply Dippy K) is a 7-year-old Irish Sport Horse gelding ridden and owned by Cole Horn and bred by Knightfield Stud. The pair will represent the U.S. at the 2021 FEI Eventing World Breeding Championships for Young Horses in the 7-year-old CCIYH3*-L Championship. The Championship will take place at Mondial du Lion in Le Lion d’Angers, France on October 21-24, 2021. [Mondial du Lion Travel Grant Winner]

Are you a half pad addict? Some riders always, always use a half pad, but in reality, they aren’t always doing as much good as you think they are. In a new study, gel-filled half-pads increased pressure at the withers, potentially causing discomfort and interfering with horses’ movement. Meanwhile, new wool and medical-grade foam half-pads appeared somewhat helpful, reducing pressure under the rider’s seat during sitting trot and canter—at least under the saddles used in the study, said Russell MacKechnie-Guire, PhD, of Centaur Biomechanics and The Royal Veterinary College. The findings suggest not all half-pads are helpful—although some can be—and that it’s critical riders discuss half-pad options with their saddle fitters to make the right choice for their horse and saddle. [Half Pads Aren’t Always Helpful]

Best of Blogs: Knowing When To Say Goodbye

Hardly anything pleases me more than looking at talented young horses. Winners were crowned in four age groups across each of the Olympic disciplines at the 2021 NEXGEN young horse championships, which has proved hugely popular since it launched last year. “This is a new series showcasing the very best of British-based equine talent in the three Olympic disciplines, and we have big plans and high hopes for the future,” said NEXGEN director Victoria Wright. “We’d like to emulate Germany’s Bundeschampionat, and we will keep working towards producing an event of that significance.” [NEXGEN Young Horse Champions]