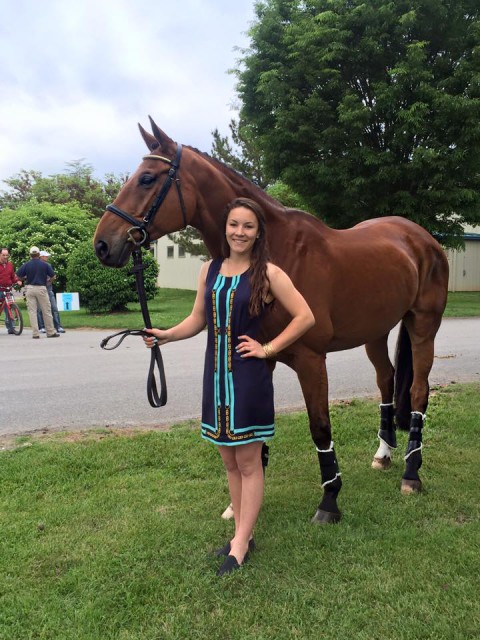 Twizzle just officially passed the jog yesterday for his 41st FEI competition. He and Morgan Booth are contesting the VA CCI* this weekend….more on that later. Photo courtesy of WCE FB.

With the Virginia Horse Trials well underway, I’m getting antsy to arrive and compete and hang out with everyone this weekend. For me, growing up an hour away from the Virginia Horse Center was always a gimme, but as I’ve gotten older I realized exactly how awesome it is to have such an incredible facility just down the road. I’m spoiled anyway living in Eventing Mecca Virginia, but there’s something always very special and nostalgic about a trip to the VHC. I did my first schooling horse trials there as a wee one on ponies, and won my first FEI event there with Nyls, also as somewhat of a wee one. Super psyched to get there tomorrow!

We are very sad to report the death of four-star and WEG competitor Orient Express after an injury incurred at New Zealand’s CCI3* at Taupo. “Blue” competed for ten years by Clarke Johnstone, including a bronze medal team performance at the 2010 WEG and a win in the 2011 FEI World Cup Eventing Series. Blue was retired in 2013 but made a comeback after two years out of competition. Our thoughts are with Clarke and his family at this time. [Four Star Horse Dies at Taupo]

Unfortunately, Jon Holling has had to withdraw his position as coach to the Area IV Young Riders this year. Jon posted an update to his Facebook page indicating that his ill-timed broken leg from early this spring has left him with a predicament for getting his horses back into work and competing for the summer and fall. Jon has been a great mentor and coach to Area IV for many years now, and a great source of amusement each summer at the horse park for NAJYRC, and will be sorely missed in 2015! [Holling Eventing Update]

Ever wanted to go behind the scenes with World and Olympic Champion Blyth Tait? Now you can! Blyth has a rather modest yard with all the basic necessities, but none of the frills. While he doesn’t have an indoor or a horse walker, he does have an “American style” barn which he likes very much, and only six horses in training at the moment, which means lots of one-on-one attention for each animal. [Behind Stable Doors with Blyth Tait]

Let’s talk fly sheets, because unless you’re living in the arctic, you have flies already. I like to keep my horses out at night, but we have other horses that have to go out during the day, and others that are total bugaboos about flies at any time of the day. We bought two of these Amigo Bug Buster fly sheets for the day turnout horses this year, and I’ve been super pleased with how lightweight they are, easy to clean, and best of all, durable. We even use one on Viola, who is the ultimate blanket shredder of the farm! [Amigo Bug Buster from SmartPak]

Jo-Anne Gelarden and Shackleton show us how it’s done at VAHT in the Long Format Preliminary CCI* in 2011.