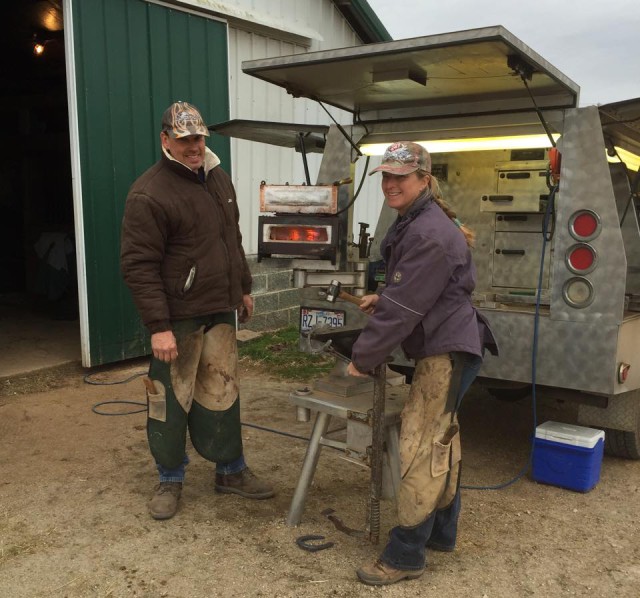 Dwayne and Jennifer Holder are a husband and wife farrier duo making their living shoeing horses near their home in Midland, North Carolina. With every trim and every shoeing, their goal is always the same: a sound horse and a happy owner.

Dwayne nailed on his first shoe in 1982 when he was a senior in high school. He met Jennifer when he was shoeing her horse, and later an untimely kick to Dwayne’s ribs forced Jennifer to get under the horse herself.

With their different riding backgrounds, Dwayne and Jennifer each bring their own skills to the table. Dwayne learned the trade out of necessity.

Dwayne took the state exam at the end of the course and then traveled the Quarter Horse circuit with a master farrier named RC Clark. Now Dwayne himself is a master through the BWFA (Brotherhood of Working Farriers Association) as well as a tester.

Jennifer’s contribution, having been a competitive event rider long before she became a farrier, is her well-rounded knowledge of sport horses.

“I’ve had horses all my life. I’ve always paid a lot of attention to the vet, farrier and trainer. I absorbed all of that,” Jennifer said. “It really does help a lot with the shoeing – understanding what the owner wants out of the horse in terms of movement and performance.”

“I always told [other farriers] that if Jennifer learned to shoe it would hurt them [business-wise],” Dwayne said. “She can already talk to the vets, the vets like her and she understands lameness and blemishes and problems with conformation better than three of the best farriers I know put together.”

Guided by Dwayne, Jennifer learned to shoe and has passed the BWFA journeyman II test, which is one step below master. She started shoeing full time in 2008 when the recession hit. “You can skip riding lessons, but you can’t skip having a horse shod or trimmed.”

Although Dwayne has been in the business for 30 years and Jennifer has learned from his years of experience, they continue to attend seminars and classes to stay abreast of new science and technology.

“We go to seminars so right or wrong, good or bad, we can answer [clients’] questions,” Dwayne said.

For instance, when the Strasser trim was a controversial topic in the news, Dwayne attended a class on it not because he wanted to learn how to do it, but because he was being asked a lot of questions and felt he needed to have the answers.

Additionally, the Holders find that spending time with product representatives helps them to better understand farrier products like plastic shoes or glue ons and how to apply them for the best results.

“You’d be surprised, eight hours of school from the guys who invented them, they show the little things that work… made the difference of them staying on,” Dwayne said.

They learn from other farriers, too, whether they like the work or not. “It’s like going to audit a trainer,” Jennifer said. “Even if you don’t agree, you’ll pick something up.”

Dwayne’s first mentor RC told him from the beginning to always watch and learn. “It doesn’t matter if it’s a backyard guy shoeing that’s not educated or the best farrier there is. Every time I’ve taken an hour to watch someone do a horse, I’ve seen something that worked or got to ask them a question.”

The Holders especially like talking to a horse’s previous farrier if the animal has moved to a new state or region. It’s like reviewing medical records and helps the new farrier get to know the new horse faster, which leads to the ideal result – a sound horse and happy owner.

Finding a good farrier is a stressful process for a horse owner who has either moved to a new area or has decided to move on from their current farrier due to budget restraints or other reasons. The Holders have a few tips to help you find a farrier that will make both you and your horse happy.

“Find a farrier in your area that’s been shoeing more than 10 years, one that you don’t see his business card plastered everywhere… I would also tell you the same for a mechanic in your neighborhood,” suggests Dwayne, who has never paid to run an ad in his entire career.

“When we were in school they said the average farrier had between a 30 and 33% turnover rate per year. That sounds very high. We average less than 3%. Two percent of that is because I’ve been doing them so long the horses have died.”

Word of mouth, however, is still the best promotion. So look for a farrier that is known for sound horses and – you guessed it – happy owners.

You can find Jennifer on Facebook here, but you’ll have to ask around for Dwayne!