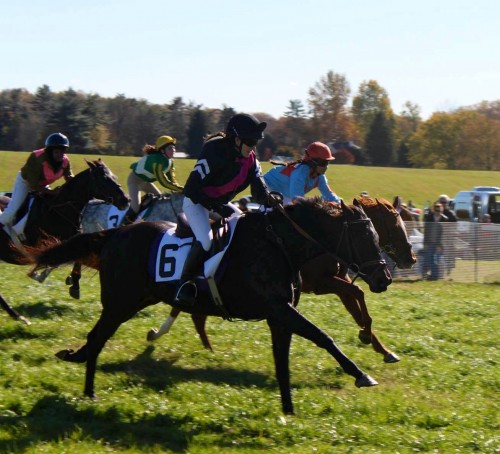 How do you stay fit in the off season? Area II Young Rider Madeline Parisan and Lord Snowdon keep fit by racing in the Pennsylvania Hunt Cup. Photo from Kim Parisan.

Many thanks to Kim Parisan, who sent us the photo above. Madeline is an Area II Young Rider and has evidently found new ways to get those gallops in as the season winds down. The race pictured was actually a Thoroughbred division in the Pennsylvania Hunt Cup and this pair came away with the win. Congratulations to Madeline and Lord Snowdon, and thanks for giving us crazy eventers even more fodder for innovative exercise ideas.

As we venture into the off season, I’ve been following all of the reports from various grooms, riders, and working students who are headed south for the winter. Thus far I must award the Largest Caravan Award to Pollard Eventing, who posted a photo on their Facebook page of the trailers all loaded and ready to head south. Best of luck in the warmer temperatures, everyone, I will just head off to go chug another Pumpkin Spice Latte and tell myself I am actually warm.

Canada has launced the “$20.14 for 2014” campaign in an effort to raise funds for their WEG bid. A $20.14 donation is being accepted from willing participants, and the money will be used to help fund the enormous cost of hosting such an event. [$20.14 for 2014 Campagin]

The Hickstead Class at the Royal Horse Show in Toronto was aptly named to honor one of show jumping’s greatest. On the two year anniversary of Hickstead’s tragic passing, McLain Ward and Rothchild jumped to the top to win the $100,000 Hickstead FEI World Cup Grand Prix. I personally can’t think of much better way to honor one of the most wonderful horses we have ever seen. [Ward and Rothchild Win Hickstead Grand Prix]

The US Dressage Finals are a new edition to the competition calendar this year. Held at the Kentucky Horse Park, the USEF Network is generously streaming coverage from the event all weekend. I don’t know about you, but I am actually a pretty big fan of watching a lot of dressage, so this is right up my alley. [USEF Network Streams US Dressage Finals]

From Horse Nation: Do you suffer from Empty Stall Syndrome?

I was inspired by the photo from the Pennsylvania Hunt Cup, so I did a little digging. I found some footage of the Thoroughbred division from a few years back. Enjoy!