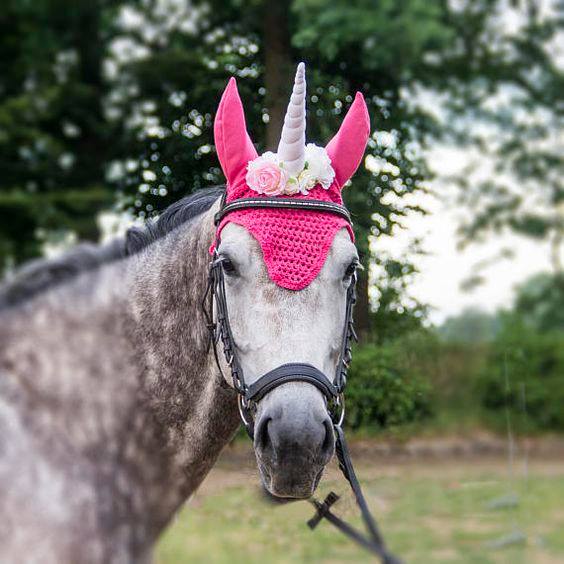 You guys. This is not a drill. You can have one of these unicorn bonnets. There is a real Etsy shop that sells “horse fashion, fly bonnets and unicorns”. I’m really, really tempted to get one, because not only are they really affordable, but imagine the photo shoot magic that I could have with a damned unicorn bonnet. I just think it would be the most incredible Instagram post ever. Hold me back, y’all.

USEF has issued a clarification that in cases of FEI provisional suspensions, USEF reciprocates FEI rules. Specifically, FEI General Article 169.5.1, which states that suspended athletes may not participate in, or be present at, public events in any other capacity than as a spectator and/or auditor. I.e. An athlete’s suspension extends to events under the jurisdiction of the USEF as well as FEI events. [USEF FEI Reciprocity suspension rules — see page 78, GR615] [FEI Case Status Tables]

Even if you don’t follow show jumping, you should know who Harrie Smolders is. Even if it’s just because you know his unbelievable horse Emerald. Harrie had what can only be described as a phenomenal 2017 year, winning the Longines Global Champions Tour overall and ending the year as the second highest ranked rider in the world, amongst other big wins. He recently did an in-depth interview about his philosophies behind the success, his horse management techniques, and his competitive edge. It’s totally worth reading. [Smolders Smashes 2017]

Looking for a rags to riches, mustang to DQ story? Look no further than Marsha Hartford-Sapp and her mustang Cobra. Cobra was returned the to BLM three times prior to meeting Marsha, and was deemed unadoptable, but with some help he competed through Prix St Georges level, and also has now taken on the world of Western dressage. Oh, did I mention there is a country song about him? Yeah. [From Wild to World Champion]

The OTTB pre purchase exam: let’s open this can of worms. Just about everyone has a different opinion on PPE’s, and doing one on a racehorse is definitely recommended, because despite their relatively young age, they’ve had more miles than most other horses starting a new career. There are lots of considerations, and certainly no one right answer, but The Horse got Dr Janik Gasiowroski to talk about components to consider when getting a new OTTB. [OTTB Pre-Purchase Exams]