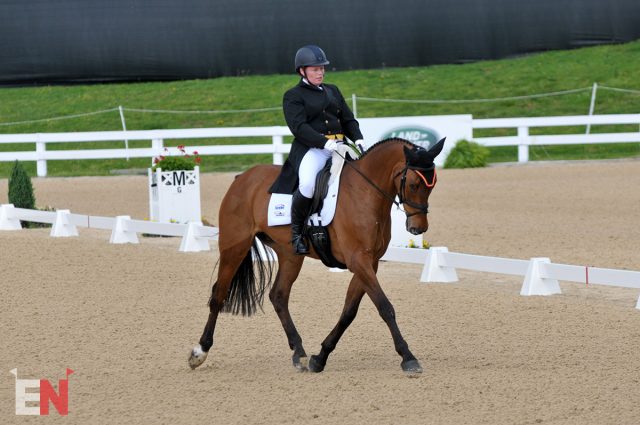 Want to to ride at an FEI event or the AECs without “officially” qualifying or paying the entry fees? Consider doing the test ride. I rode three test rides last year that were invaluable. I got to expose my horse to an atmospheric venue, see how I might stack up against the competition, and improve my dressage scores in the events that followed.

The first time my name was put forward to test ride I was so excited. You mean I get to try out the cross country course before anyone else does? Heck yeah I’ll do it! Turns out the test ride is for dressage only. (What can I say? I was naïve but hopeful.)

Test riding takes place at competitions that require a panel of two or more judges: namely the CIC/CCI tests or the Preliminary through Advanced tests at the AECs. Judges use the test ride to get on the same page. More on the purpose of the test ride below from judge Mark Weissbecker.

You don’t have to be a professional or ride a fancy horse. Amateurs who can put down a clear and hopefully accurate test at the Preliminary+ levels are eligible.

I’m an amateur with a wonderful, steady OTTB. We’re solid in our partnership and he is willing and competent in the dressage phase (on most days). I was experienced riding the tests I agreed to ride and would not have felt comfortable doing them for the first time as a test rider. Other competitors who get tapped to test ride, especially at the Intermediate and Advanced levels, have never performed their test rides in competition and do just fine. Remember the terrific job done by Ballynoe Castle’s groom Kathleen Blauth Murray for last year’s Kentucky test ride?

I was nervous before my first test ride. But unless it’s a sentimental pair at a big-time event, the reality is that no one shows up to watch a test ride at the crack of dawn. My dressage coach, who is also a judge, told me my only goal was to ride a pleasant test. Basically, don’t go out there and try to make your horse into Totilas.

How the test ride works

The test ride takes place about 20 minutes before the first horse in the competition comes down the centerline. Your ride plays out as if you were competing in the dressage phase at the competition. You are assigned a time, pick up a packet with a number, complete a bit check, and leave your whip ringside (you are free to use it in warm-up). I braided. Later my tests were available for pick-up. They were marked and scored fully including summarizing comments. Big plus.

For one of the competitions I received complimentary tickets to the competitor meetings and parties. It was so nice to enjoy a few glasses of wine without the anxiety of competing the following day.

Kelly performing the test ride at the AECs:

The purpose of the test ride

According to FEI licensed eventing and “S” judge Mark Weissbecker, one reason is for the judge at C and the judge on the side to familiarize themselves with the flow of the test. Another is to establish the critical relationship between the judge and scribe. “It can become a very long day in a very short period of time if good communication is not established early on.” (Also true for horse and rider!) He sees the test ride as an important part in “the ongoing effort to create a fair and equal field of play.”

While the judges may not score every movement the same, they want to agree on the requirements of the test and discuss any of the subtler aspects related to movements, directives or collectives.

Often the reason for different scores on a movement is the location of the judge.

“A shoulder-in on the long side,” Mark says, “might be scored higher by the judge at E who sees the quality of gait, fluency and outline as quite good — whereas the judge at C might note the lack of bend, position and suppleness which is not as evident from the side, thereby justifying a lower score.”

After one of my test rides, my husband watched the two judges come out of their booths and talk for a good five minutes. He saw the head judge at C mimicking the steps of the rein back, perhaps to review the essential requirements (good rhythm and active steps shown in diagonal pairs). For what it’s worth, mine received a 7.0 from the judge at C (“slightly hesitant”) and a 6.5 from the judge at E (“slight resistance”).

The best part for me was hearing the comment from the judge at C as I completed my test and left the ring. “What a pleasant start to the day. Thank you so much for doing this.” Exactly the goal my coach told me to focus on. The judge, coach and rider ended up on the same page.

If you want to test ride

Talk to your coach or instructor. Sometimes they get contacted to put names forward. I don’t see any harm in contacting the show organizer directly if you’re confident about doing a test ride. Ask around. Organizers and judges genuinely appreciate the test rider.