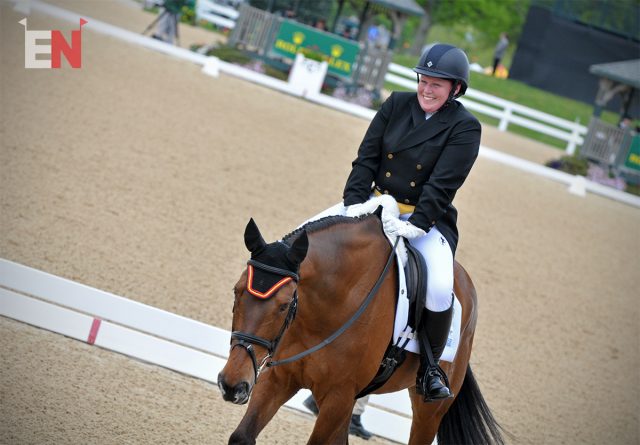 Ballynoe Castle RM kicked off his swansong weekend here at the Rolex Kentucky Three-Day Event on a sweet note this morning, performing the test ride with longtime groom Kathleen Murray.

The Kentucky Horse Park is a fitting venue for the retirement of Buck Davidson’s beloved partner Reggie, a 17-year-old Irish Sport Horse owned by Carl and Cassie Segal, whose accolades include being the highest scoring event horse in history. He won the USET Foundation Pinnacle Cup here in 2013 with a third-place finish and was named Best Conditioned Horse the following year when he finished fourth.

Reggie has been the horse of a lifetime not just for Buck but for Kathleen as well. She has traveled around the world with him, attending to his health and happiness, and their intimate rapport is apparent — Reggie was even in attendance at her wedding!

As a gesture of appreciation for her years of devotion to Reggie and Buck Davidson Eventing, which now number a decade, Buck gave Kathleen the ride on Reggie earlier this year with the intention of a Rolex retirement. The pair has been romping around at Training Level, and have performed one- and two-star test rides, and this morning — three-star dressage, pfft! — they made the big jump up to the four-star level.

Samantha Clark caught up with Kathleen after their test: 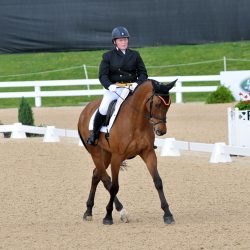 Kathleen Murray and Ballynoe Castle RM in the half pass. Photo by Leslie Threlkeld. 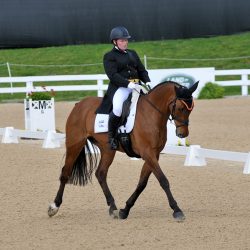 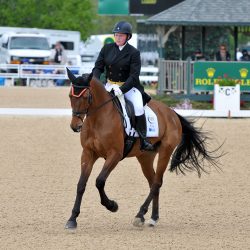 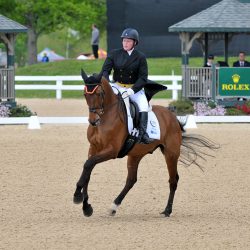 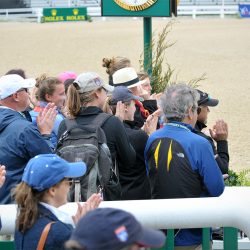 A big round of applause from Reggie’s fans. Photo by Leslie Threlkeld. 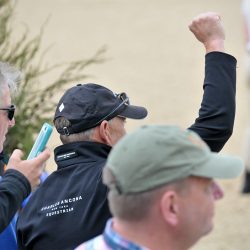 Fans show their appreciation for one of the greatest American event horses of all time. Photo by Leslie Threlkeld. 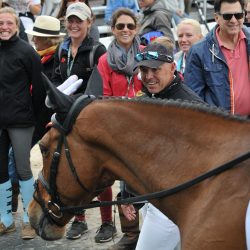 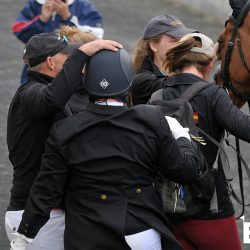 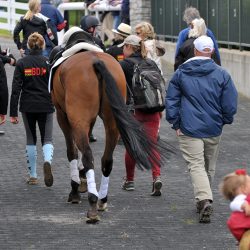 Down the ramp after their test. Photo by Leslie Threlkeld.

Reggie will be retired in what is sure to be an emotional ceremony on Sunday, and we’ll be the first to leap to our feet for a standing ovation! Hats off to you, Reggie, and here’s wishing you many long, happy years of lolling in green pastures and being spoilt rotten to come.

Of interest to diehard Reggie fans: World Equestrian Brands is hosting a raffle for Reggie’s tack, including his Amerigo saddle! Visit the Hagyard Pharmacy booth on Custom Made Road or the World Equestrian Brands booth in the Trade Fair to purchase raffle tickets ($10 for one ticket, $50 for six tickets, or $100 for 15 tickets). The winner will be drawn on Sunday immediately following Reggie’s retirement ceremony.

All proceeds will go to FlyPups, a 501c(3) organization that transports dogs from desperate situations to fosters, no-kill shelters and forever homes. FlyPups also delivers trained dogs to veterans for service and companionship, as well as bringing aid and relief to areas impacted by natural disasters.