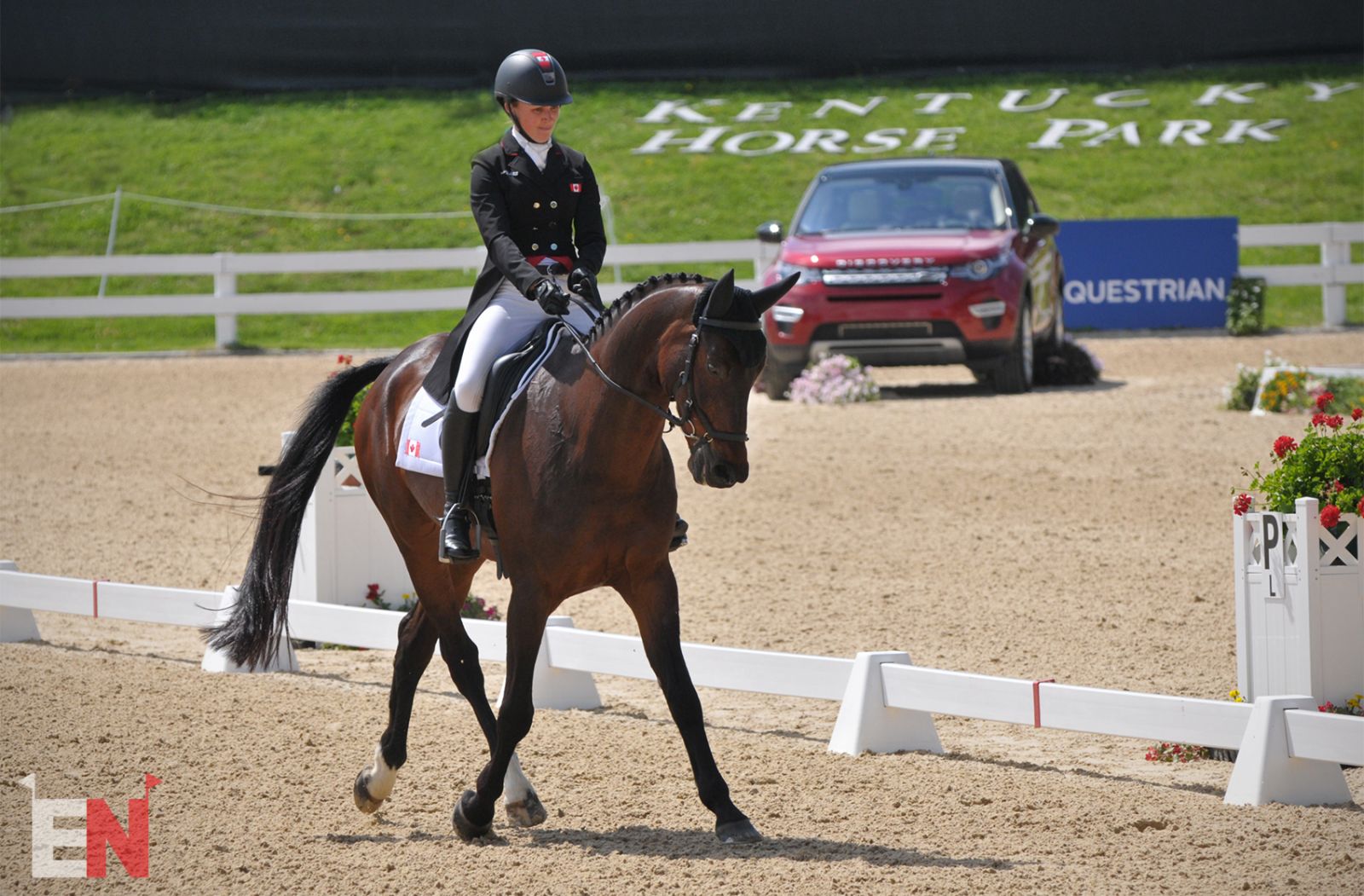 Welcome to the afternoon session of dressage here on day one of the Rolex Kentucky Three-Day Event! We’re all geared up for some more fancy prancing, and we’re sure to see some lovely tests this afternoon.

As it stands now, Katie Ruppel and her OTTB Houdini hold the lead on a personal best score of 46.0. First up this afternoon at 1:30 p.m. EST will be Canada’s Selena O’Hanlon and Foxwood High.

If you missed any of this morning’s action, catch up on our open thread here and the lunch report here. Keep refreshing this page for the latest!

3:40 p.m.: The leaderboard has been updated again and it looks like Jessica’s score is actually a 43.1. Way to go, Jessie!

3:37 p.m.: Still waiting on final confirmation but it looks like Jessica Phoenix has taken the overnight lead with Pavarotti on a score of 43.5. Lauren’s score was adjusted to a 43.8.

The final ride of the day, @Phoenix_Eq_Team and Pavrotti score a 43.5 for second overnight! #Rk3DE

We think @lkieffer just went into the lead on Vermiculus!!

3:33 p.m.: Big pats for Pavarotti and a big cheer from the crowd as the final ride of the day. Now, we wait.

3:31 p.m.: Well, Vermiculus just threw down the gauntlet in his four-star debut, earning a 43.9 to take the lead! Only Pavarotti stands in his way for today.

3:30 p.m.: Pavarotti’s last two four-star scores are lower than the leading score today. Can he do it again and steal the show?

Jen McFall is back at #rk3de with High Times, a more mature & experienced horse since his first appearance

3:28 p.m.: We could well see some shuffles between Lauren and Vermiculus and now Jessica Phoenix and Pavarotti, who are quite well known for stealing the show on the flat.

3:26 p.m.: No matter how high profile Lauren is, or how many horse she has, Lauren still shows so much love for each horse she sits on.

The perks of working. Getting a front row seat to warm up on a beautiful day. (Lauren Kieffer & Vermiculus warming up.) #rk3de #rolex #horseshows #dreamjob

3:24 p.m.: Whew, Karen and Allison are tough commentators! But so educational to hear the comments from two experts.

3:21 p.m.: In 2010, Lauren Kieffer made her CCI4* debut aboard her Anglo-Arab, Snooze Alarm. Today, she enters the ring on his full brother, Vermiculus, whom she purchased as a yearling.

3:20 p.m.: Just two more to see today: Lauren Kieffer and Vermiculus and Jessica Phoenix and Pavarotti. Jen McFall scores a 55.7 with High Times. They scored a 71.5 in their debut in 2014, so that is hard work paying off right there!

3:17 p.m.: Jen did a great job holding together a strong Billy, and she looks very pleased at the end. We can’t wait to see this pair on Saturday!

Eventers are the nice people of the equestrian world. There ain’t no way hunter/jumper riders tell other competitors how the course rode.

3:09 p.m.: And another West Coast pair in the ring next, Jennifer McFall and High Times. This is their second go at Rolex after debuting in 2014.

3:09 p.m.: We think Allison Springer has missed her calling as a judge! She’s almost called the last few scores right on point.

A big smile from Jenny Caras after scoring 46.3 in her 4* debut with Fernhill Fortitude #RK3DE #bestweekendallyear

3:07 p.m.: A bit behind on the stretch circle but Truly Wiley has relaxed a bit more throughout the test.

3:01 p.m.: And now we welcome back Kelly Prather to the Rolex Arena, this time with Truly Wiley. Kelly last made an appearance here in 2011 with Ballinakill Glory, where they finished in the top 30.

Stop by the World Equestrian Brands booth in the @RolexKentucky Trade Fair (#212) at 3:30 for autographs with Hawley Bennett & Sharon White!

2:59 p.m.: Raise your hand if you’re excited to see Patrick the Mini Horse this weekend!!

2:57 p.m.: A tad unsteady in the bridle for Spring Easy but a lovely mover nonetheless.

2:55 p.m.: And now another debutante, Caroline Martin with Spring Easy.

The crowd was thrilled to see Hawley Bennett-Awad is back a the four-star level! #rk3de

A 46.7 for Jenny Caras and Fernhill Fortitude in their #RK3DE debut!

2:52 p.m.: Jenny had a wonderful first ride at Rolex! She’s all smiles as she does her final halt and salute. Nicely done!

2:48 p.m.: Next up, another rookie rider, Jenny Caras and Fernhill Fortitude. This is definitely a talented young pair to watch!

2:48 p.m.: Consistent across the board from all three judges for Hawley Bennett-Awad:

2:41 p.m.: And returning to this level for the first time in three years is Hawley Bennett-Awad and Jollybo, a former ride of Justine Dutton’s.

Jolie Wentworth is happy to be back in the #rk3de arena with Goodknight despite the wind!

2:26 p.m.: We’re onto a short break here before the next group is led off by Hawley Bennett-Awad and Jollybo.

Road trip! Milhouse is gonna sleep through the whole thing and Roxy is SUCH a backseat driver. #rk3de #roadtrip #adoptdontshop

2:19 p.m.: Last to go of this first afternoon section is Mexico’s Daniela Moguel and Cecelia. If you don’t know too much about this pair, you should.

Maxime Livio takes the lead on 44.5 giving all the credit to Qalo Des Mers #rk3de

2:10 p.m.: And here comes another West Coast pair, Jolie Wentworth and Goodknight! This is the fourth CCI4* start for this pair.

2:07 p.m.: An interesting spot for the number on Qalao Des Mers breastplate:

2:03 p.m.: Maxime came in guns blazing and had a break to canter in the first medium trot. This pair is so lovely to watch, regardless.

Emotions for Madeline Backus after her first dressage test at #RK3DE.

1:55 p.m.: Allison Springer confesses that she’s a “sucker for Connemaras,” aren’t we all!

1:54 p.m.: Next up, Allie Sacksen and the world’s cutest Connemara/TB cross, Sparrow’s Nio. Get to know them here.

1:52 p.m.: So interesting getting tidbits from the commentators. Allison remarks that managing tense horses often involves putting them into a bit lower of a frame, which can then take away from a forward, connected downward transition.

1:51 p.m.: Erin and Mettraise put together a nice looking test even with some tension. They’ll be happy to get on with the fun stuff!

Selena O Hanlon discusses her test on Foxwoods High, & an unfortunate incident with a dog in the daytime!

1:46 p.m.: Next up with be Erin Sylvester and Mettraise, making his CCI4* debut. Frankie Thieriot Stutes mentions that is is beginning to rain now.

1:43 p.m.: Rox got a little stuck coming off of his left half pass but Kristin is doing a great job here. This is a big, strong horse and Kristin is keeping a lid on any tension quite expertly.

1:39 p.m.: “I hope for a lot for (Kristin) this year,” Jimmy says. Kristin and “Rox” really strike a lasting impression together.

1:37 p.m.: A 50.1 puts Selena on her personal best with this horse at Rolex – their official personal best at this level is a 49.5 earned at WEG in 2014. Next up will be Kristin Schmolze and Ballylaffin Bracken.

1:35 p.m.: Selena looks pleased with her test. A couple of tiny mistakes in the canter work but such a nice looking test overall and their final centerline was very smooth.

1:33 p.m.: Woody looking lovely and relaxed in his walk work, which is often quite difficult for these horses. Selena has worked very hard on the flat with this horse, and the work is paying off with some really nice work today.

1:28 p.m.: Guest commentator Jimmy Wofford says “We don’t have a talent deficit in this country, we have an experience deficit.” John Kyle is joined by Jimmy as well as Allison Springer for the afternoon session.