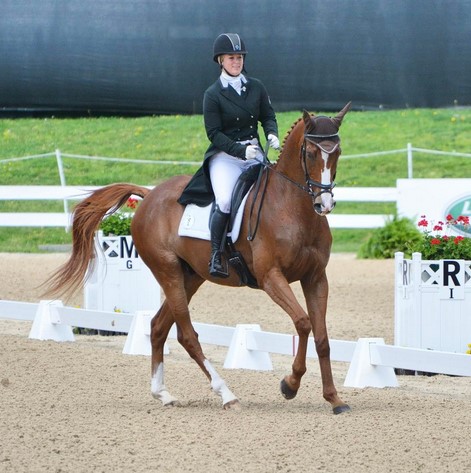 Good morning from Lexington! We are getting in position for day one of dressage at the Rolex Kentucky Three-Day Event, and I could not be more thrilled to watch Kathleen Murray and Ballynoe Castle RM do the test ride at 9:40 a.m. EST. This is a moment not to miss, so I highly suggest pulling up a chair and tuning in!

I’ll be updating this post throughout each ride, so keep refreshing to stay up to date with the latest. I’ll also start a new thread after the lunch break this afternoon, so there is a ton of exciting content coming your way. Enjoy! 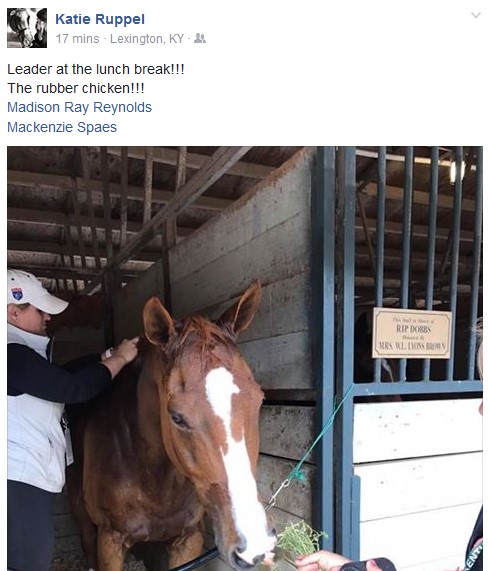 Go Bunnie! Rise up and Rise Against! What more can we say?!

12:13 p.m.: Ecko got quite offended coming off of his left half-pass. Bunnie does such a great job taking a breath and asking again without losing composure. We could all learn something from her style and tact. You’ll see she also tries to leave the curb rein alone so as to keep the peace.

Courtney Cooper IS a star! She talks about her test on Who’s A Star and compares it to last year

12:10 p.m.: “Ecko” is not a fan of the dressage, but if anyone can squeeze points out of this horse, it will be Bunnie with her tactful rider. You will not want to miss this pair on Saturday! Also, Bunnie’s groom, Taylor Ravenscroft, is currently leading our Rolex Groom’s award! Go vote here.

12:09 p.m.: Next in is fan favorite (and my personal hero) Bunnie Sexton and Rise Against. Bunnie is an inspiration to us all, completing her first Rolex at the age of 50. #BeLikeBunnie

A score of 50.0 for Courtney Cooper and her homebred Who’s A Star #RK3DE

12:03 p.m.: Madeline looking so calm and mature beyond her years for her first Rolex test. I remember talking to Madeline in 2013 when she was competing in the Junior Training division with P.S. Arianna, and thinking that this kid was going to go somewhere.

11:58 a.m.: Sally Cousins and Tsunami finish their test and are ready to move on to the fun stuff!

Courtney Cooper and her homebred Who’s A Star earn a 50.0, an improvement on their previous CCI4* score of 50.9! #RK3DE

Boyd Martin all smiles after his test with Crackerjack. 48.7 for fourth place #RK3DE

Katie Ruppel showers Houdini with praise after taking the current lead on a 46.0 #rk3de

11:46 a.m.: Next in will be Courtney Cooper and Who’s A Star, back for their second Rolex run.

Will Coleman will receive a -2 for not making it into the arena in time. That will take his score to a 48.6 #RK3DE

48.7 for @WindurraUSA and Crackerjack for fourth place at the moment. The second best score for this pair at the 4* level #RK3DE

11:42 a.m.: Crackerjack takes a moment to casually grab a nose scratch after a lovely test.

11:37 a.m.: We will now see the first of Boyd Martin’s ride, Lucy Boynton Lie’s Crackerjack. This is the second Rolex start for Crackerjack, who finished 10th at Luhmühlen last year.

11:33 a.m.: Lillian shows off one of the most stretchy canter circles that we’ve seen so far. I’ve been really interested to see how this movement rides, and so far I’ve noticed that the stretch is a bit difficult to really achieve, but Whitey is really demonstrating a lengthened frame here.

46.1 for Katie Ruppel and Houdini to tie Phillip Dutton and I’m Sew Ready for the lead #RK3DE

11:31 a.m.: Lillian and “Whitey” looking professional. A bit of a sudden halt at C for their reinback, but otherwise they’re doing a great job so far.

11:26 a.m.: “I think Katie did a great job with him,” coach Clayton Fredericks says of Katie’s ride. He’s had the ride on this horse this spring and Katie has taken the ride back for Rolex.

11:24 a.m.: Houdini says, “Ok, I feel I’ve done enough here, cross country now?” Katie doing a lovely job squeezing every point she can out of her test. This pair is ready to go!

11:22 a.m.: Ok, Houdini is definitely #OTTBgoals. If I could get my little Thoroughbred to move like this for our Training test, that’d be awesome, k thanks.

11:20 a.m.: And we’re back underway with Katie Ruppel and Houdini, an off-track Thoroughbred gelding making his fifth CCI4* start this weekend. Hang onto your hats, it looks a bit windy right now!

All eyes on @LillianHeard & Share Option as they warm up for dressage! Watch them after the break at 11:28 a.m. #RK3DE pic.twitter.com/cRbuuWaj9L

11:18 a.m.: Are your credit cards ready for their toughest weekend all year?

A post shared by Classic Communications (@classiccommunications) on Apr 27, 2017 at 8:12am PDT

Will Coleman was ecstatic after a personal best test with OBOS O’Reilly! 48.6 for 2nd place in the early going #RK3DE

@willcolemanequestrian’s thoughts on his dressage test on Obos O Reilly

11:01 a.m.: Here are your leaders following the first group. Live scores can be found here.

Delighted to be supporting @RolexKentucky this weekend with media and commentary guides. We will be keeping you updated on here too! pic.twitter.com/bPoZVduhnI

11:00 a.m.: Don’t forget to support the online auction for Lee Lee Jones, Phillip Dutton’s stepdaughter. There is so much good stuff to bid on, check it out here. 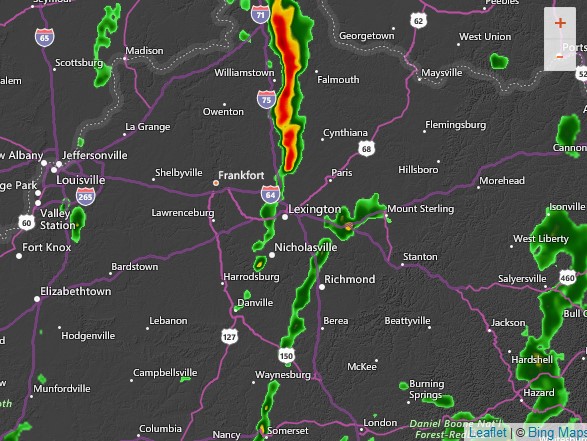 10:56 a.m.: A couple of bobbles for Buck and Park Trader but he looks happy and gives the horse big pats after his salute. They earn a 53.6 which will put them into provisional third at the moment. We go onto a short break now and will see Katie Ruppel and Houdini at 11:20.

10:50 a.m.: Buck Davidson nails the first halt with Park Trader and is off to a great start.

A great score for Will Coleman 🇺🇸 and OBOS O’Reilly finishing on a 47.6 @RolexKentucky pic.twitter.com/Ba5iQHZU9M

10:46 a.m.: A beautiful change from the extended canter across the diagonal for this pair.

10:44 a.m.: Oboe looks keen and sharp but so far is putting in a very accurate test.

10:43 a.m.: We’ll be adding in these signing/course walk announcements throughout the day!

@DuttonEventing and his first ride I’m Sew Ready had some lovely trot work and score a 46.1 to take a handy early lead #RK3DE

10:33 a.m.: And we’re getting underway with our first U.S. competitor of the day with Phillip Dutton and John and Kristine Norton’s I’m Sew Ready. This is the first CCI4* for this horse, but we should be in for a treat right now.

10:29 a.m.: Ok, Reggie/Kathleen obsession done (for now). Back to your regularly scheduled programming.

10:32 a.m.: Joe looks thrilled! Some really nice moments from Clip Clop in a very difficult test on a windy and what looks to be a bit chilly of a day!

10:28 a.m.: This is the second CCI4* start for Clip Clop, who is 14 this year. They completed last year with one runout on cross country.

10:27 a.m.: Next in will be Joe Meyer and Clip Clop, who looked stunning and full of himself at the jog yesterday!

Dressage is underway! First in: James Allison and Parker #rk3de

@Phoenix_Eq_Team and A Little Romance scores a 58.7 with one error in her test #RK3DE

We’re so excited to kick off Rolex Kentucky this morning! If you’re here for day one of dressage, stop by Majyk… https://t.co/cwA0xYCzZQ

10:23 a.m.: Jessie has an error after missing her canter stretch circle. A Little Romance is looking a little short and tense in the canter work, but if anyone can coax relaxation out of a horse, it’s Jessie.

10:16 a.m.: James demonstrates a new movement in this test, the stretch canter circle. This will be an interesting movement to watch for these super fit event horses! James looks pleased with this test, which commentator Liz Halliday-Sharp remarked was one of the more relaxed she’s ever seen this horse do.

10:12 a.m.: So far looking cool and collected for this pair, who is one of the most experienced in their field. This is their seventh CCI4* start.

10:11 a.m.: James Alliston and Parker are getting us underway! James has pinned the tails of his shadbelly today to try and keep Parker as relaxed as possible.

9:49 a.m.: We will be back in just about 20 minutes with the first competitive ride of the day, James Alliston and Parker!

9:47 a.m. : And, I’m ugly crying. The cheers. THANK YOU, EN, for filling this stadium for this ride. It means so much to the BDJ camp and the Segal family.

9:42 a.m.: Looking like the pros they are. If you missed this special story, catch up here.

9:40 a.m.: And entering Rolex Stadium, Kathleen Murray and Ballynoe Castle RM. Reggie has his game face on, and I am crying. This is not going to be pretty (for me, not Kathleen. You do your thing, girl).