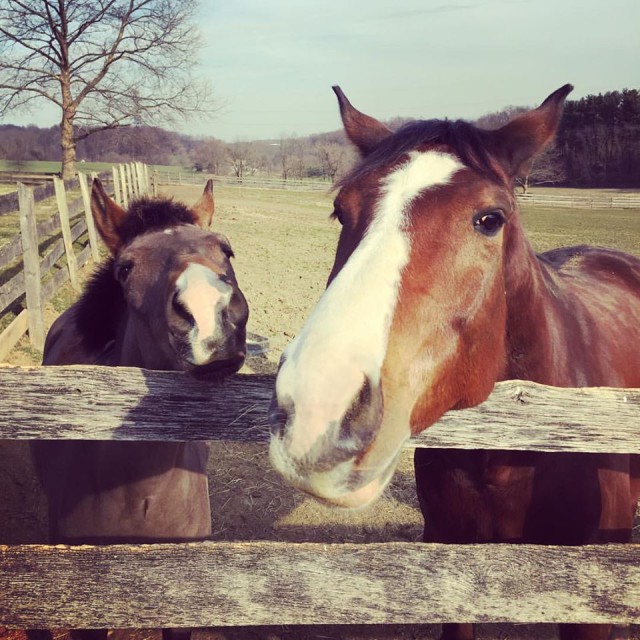 Just some dweebs in the sun. Photo by Catherine Marcks.

Yesterday, I did gallop sets in a tank top. And I turned the overhead fans on in the barn. In February. I don’t even know how to process this! My phone keeps telling me that last year this time, we had an ice storm, and two years ago I was still struggling through two feet of snow to get to the barn. I can only conclude that March and April will be hellishly cold and bizarre, because there is no way that we just get to skip winter scot free. It’s just not possible.

Keeping it simple was the theme with Chris Burton for the Young Horse part of the ICP Symposium in Florida. Working with four and five year olds, Chris emphasized that while there are a lot of theories about training systems at a young age, he likes to simplify it a bit. “There is so much to talk about training young horses, but in my mind it is very simple. The horse needs to go forward, it needs to stop and it needs to turn right and left,” said Burton. [KISS Is Key with Chris Burton]

Let’s hop into a time machine and go back into the USEA records and trophy room. The Windy Acres Trophy has been awarded 56 times to the USEA Rider of the Year, but only 16 different people have their names engraved. Bruce Davidson Sr holds the record with a whopping fourteen Rider of the Year titles to his name, but Phillip Dutton is right on his heels with thirteen. The last lady to win was Karen Stives in 1981, and Dennis Glaccum was the first to win with Kilkerry in 1960. [Trophy Tales From the USEA]

Halt Canter at X announced yesterday the recipients of their grants, raised at the 2016 Event at Rebecca Farm. With a grand total of $70,000 this year, the organization has contributed more than a quarter of a million dollars to various cancer halting causes since the inception in 2012. First time recipient Dr. Robert Mutter, M.D. from the Maya Clinic received $50,000 towards his research efforts, and fifth time recipients Dr. Mario Capecchi and Dr Simon Titen of the telomere study in Salt Lake City received $20,000. [Halt Canter at X Announces Grant Recipients]

Did you know that SmartPak does a Canine line? Sure, you’ve bought a dog jacket from them, but they also offer doggie supplements in the same easy format as what you get for your horse! My dog, Polly, does a lot of running along with the horses, and I was feeling guilty as I added joint supplements to my horse’s feed every day while looking at her. She’s 8 this year, so I got her some SmartCanine Senior, which she gobbles up right away with a glob of peanut butter every day. [SmartPak Product of The Day]

Just a bit of completely mad fox hunting to get you going for the day: