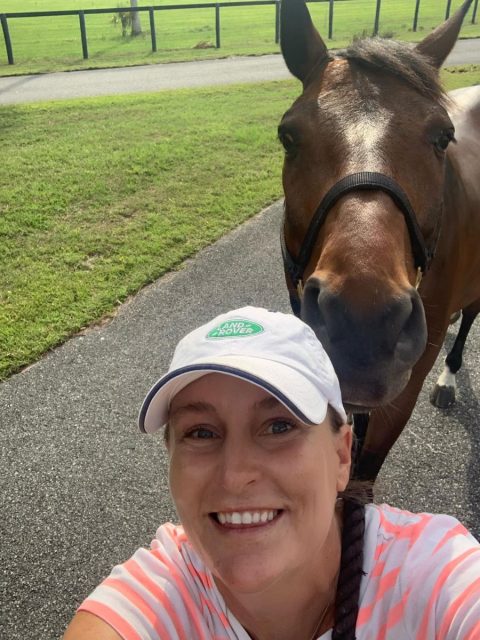 Social distancing is a little hard with this one! Photo by Sara Kozumplik Murphy.

Yesterday, I was referred to as a “pro” at quarantine. I wish I could say this is the first time in the past few weeks that somebody has casually mentioned to this to me, but it is most definitely not. I also have this feeling that I should be a little offended, but I am not at all. And they’re right, I am a pro at quarantine, and while I miss a lot of things (competing) I’m doing alright with my ponies and my hobbies and my hacking.

All of the Kentucky memories are flooding in. In 2010, before going viral was a thing, Josh Walker took a special photo of a young pony clubber patting Karen O’Connor’s Mandiba after dressage at Kentucky. That young pony clubber, Keely Bechtol, has continued to pursue her equine passion, fueled in part by that special memory. [The Pat Seen Around The World]

Who doesn’t remember Tullibard’s Hawkwind from 2012 Kentucky? I certainly remember watching Jordan Linstedt Granquist, a relative unknown from the west coast, and seeing how she trusted Jack so much on that cross country course. That year was particularly rough for cross country, and while they racked up 79 time penalties, they went clear and our hearts were filled. [Tullibard’s Hawkwind Proved the Naysayers Wrong]

Talk Nerdy to Me:  13 Perfectly Horsey Quotes From Books

Not sorry at all: