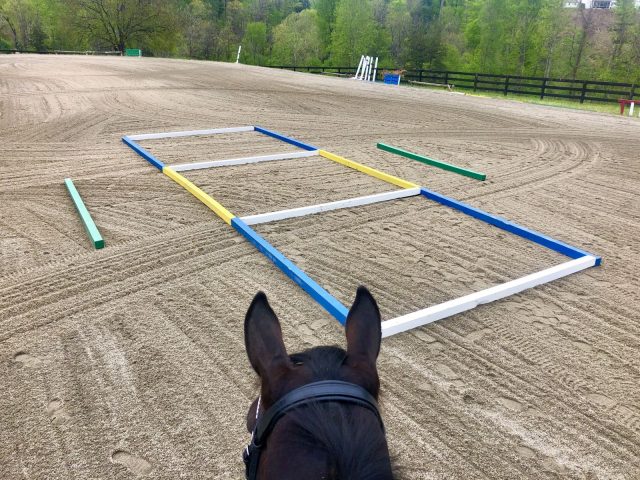 Lots of Badminton memories coming up this weekend, but can we really top the time that Mark Todd rode around cross country clear with ONE STIRRUP? The year was 1995, and a young 39-year-old Mark was bopping around on Bertie Blunt when a third of a way around, his left stirrup snapped off. Committed to continuing, he figured out a way to hitch his leg up on the pommel during galloping stretches and put it down before and over fences. Absolute legend, don’t miss the video. [Mark Todd, 1 Stirrup, Badminton XC]

Mary King’s newest homebred has had a terribly rough start to life. The last foal of winning CCI5* mare King’s Temptress, his dam was put down on April 18 suffering from peritonitis. Luckily he found a foster mare locally, however she died from a freak colic just this week on the 4th of May. Vinnie has now found a third mother to love him, and he seems to be quite a tough little lad, taking it all in stride. [Heartbreak Again for Mary King’s Foal]

Speaking of Mary King, can we throw it back to her first Badminton victory? The year was 1992, the horse was the stunning King William. Through an unbelievably wet and muddy cross country course, the pair triumphed that year to record her first victory at the level, beginning the storied career we know now. [Mary King Wins Badminton]

Helmet safety: let’s talk about it. While helmet awareness is at an all time high, studies still show that 88% of riders who suffer from concussions from a fall were wearing helmets at the time, which leads us to the question, how can we make helmets safer? COTH got a tour of the MIPS research facility in January to learn more about how they’re working on developing new technology for equestrian helmets, and it is fascinating. [Helping Brains, One Liner At A Time]

Featured Video: Earlier this week 2019 winner Piggy March (neé French) penned this poetic ode to Badminton — here’s another bit of lyricism for you.