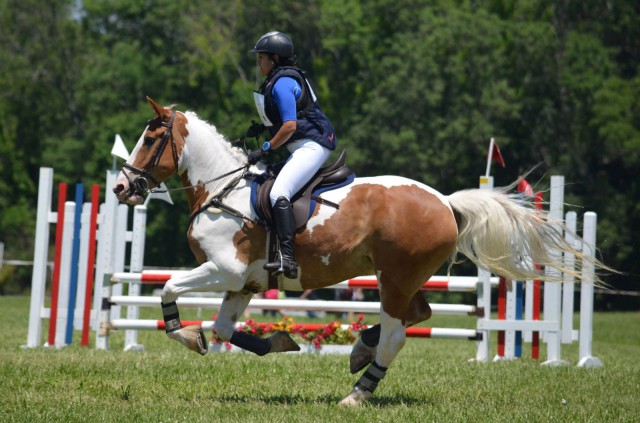 The last horse you want to be at an auction with kill buyers in attendance is a draft horse, for obvious reasons. Gentle Giants Draft Horse Rescue understands this and strategically stakes out area auctions, ready to outbid them if necessary. Christine Hajek, president and founder of the Mount Airy, Md., rescue, vividly remembers the New Holland auction where she discovered Kadobi and Kanin, two full-brother draft crosses who were facing a dubious future at best.

“Kanin and Kadobi had actually already been sold to a meat buyer, and it is actually the only time I have bought a horse off a meat buyer,” Christine says. “I usually refuse to do that because I will not pay them a profit, but he had a full load so he sold them to me at his cost. … Had I not taken them, he would have fattened them some and sent them to slaughter. I paid $600 for the pair. They were both thin, had hoof neglect, lice, mange, worm infestations and were halter broke but terrified of people.” 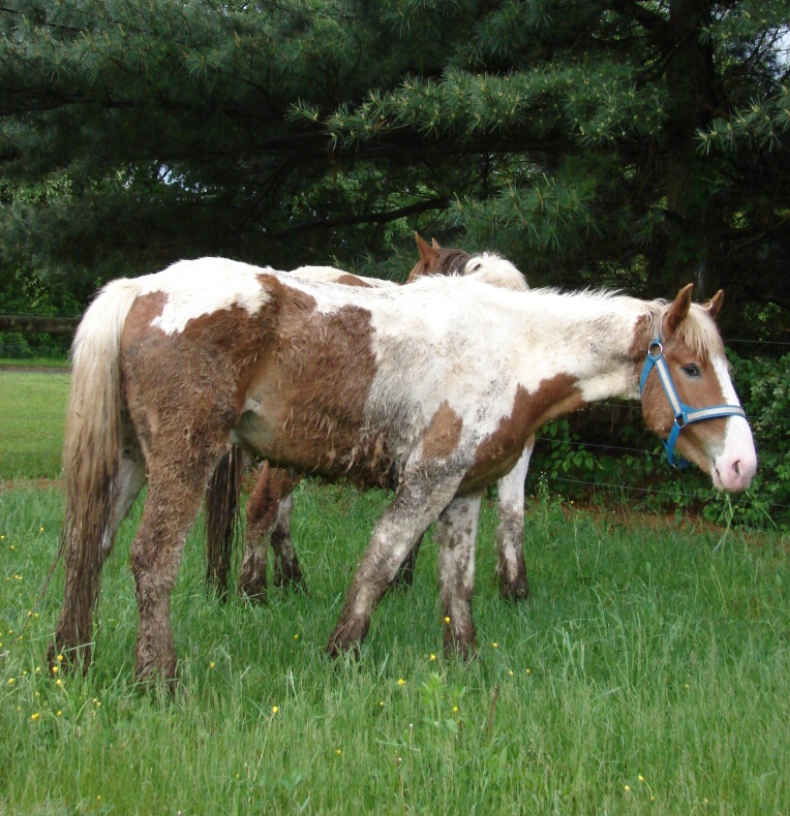 The two intercepted horses — Kadobi, age 4, and Kanin, age 5 — went into quarantine at Gentle Giants and began the process of regaining their health. Both horses took to the gradual training program. Kadobi started out with some groundwork and very basic under-saddle work, then some trail riding, and finally some schooling with Jessica Millard of Union Bridge, Md., who recognized that he was a natural jumper and started him over fences.

Kadobi was adopted out to a new owner, but the green horse was a handful, and a full-bodied one at that, and she became a bit intimidated. She was about to send him back (Gentle Giants includes a first right of refusal in their adoption contract) when she made one last-ditch phone call to Golly Tabatabaie, 28, who runs a unique training program, Bad Monkey LLC, out of McLean, Va.

“I specialize in behavioral issues and use a comprehensive approach,” Golly explains. “I look at tack, teeth, toes, tummy (nutrition), as well as training and riding to figure out what is causing the issue. Once I have an idea, I ride the horse and work with the owner to find a solution that will keep them both happy, be it consistent training rides or a new feed plan or whatever combination.”

With Kadobi, it was a simple matter of a not-quite-right fit. “This woman had done her best with him, given him the very, very best care, but he had tossed her and her daughters too many times,” Golly says. “He was fat, round (maybe too round) and happy — as long as no one went near him. They were very timid riders, and he needs a very confident rider. He was still young and understandably green, but had regressed and was so uncertain and nervous that he was becoming a bit dangerous.” 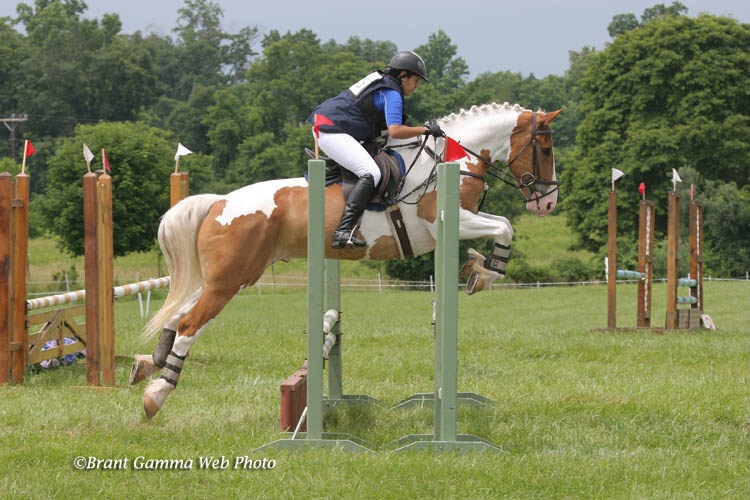 Kadobi and Golly, on the other hand, had immediate chemistry. “I started riding him, and I quickly realized how much I loved this horse,” Golly says. “It was clear that he was a one-person horse, and he had found his person. My client would comment that he was so relaxed when I was around, but was unmanageable when I wasn’t there. We, my client Christine and I, had many conversations about it, and we decided that my adopting Kadobi would be the best situation for both the horse and the people involved.”

The two gained an appreciation for one another, both in the saddle and out. Golly appreciates Kadobi’s easy-going, class-clown personality, and in return he is happy to provide a steady stream of entertainment. “He is very playful and curious and loves to stick his nose into trash cans and flip them over — even at horse shows,” Golly says. “He might do it just to hear me yell. He once grabbed an entire bag of carrots and ran away with it. He stuffed it all into his mouth, and as I grabbed my phone to call the vet because my horse was in the process of ingesting a plastic bag, he came trotting over to me and spat out the empty bag at my feet, fully devoid of carrots, but somehow amazingly intact.”

When Golly introduced Kadobi to the sport of eventing, he took to the new game with enthusiasm despite his slightly unorthodox build. “I wanted to introduce him properly and set him up for success,” Golly says. “Competition wise, we started with a jumper series and successfully competed up to 3’6″, and it was clear he still had a lot more to give. He loved the jumping; he got it. He knew ‘Hey, you put me in this ring, and I will give you speed, power and a clear round.’ He beat out fast ponies in many a jump-off by sitting on his bottom and making the tightest turn you will ever see a draft make, bringing home a lot of blues. And he is fast, so I knew we would have no problem making time in eventing.” 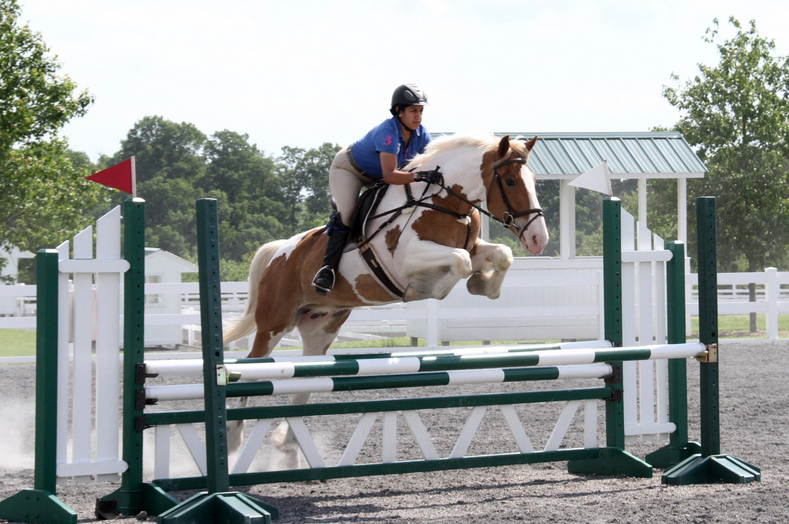 Golly carted him to a local riding facility to introduce the concept: “As I schooled him, we literally checked items off the cross-country list: Bank? Check. Water? Check. Ditch? Check.” They went Beginner Novice at Seneca Valley Pony Club H.T. the following week, going clear and finishing on their dressage score, and Golly knew she had an event horse on her hands. The next season, they did another Beginner Novice at CDCTA, then Novice at a Maryland H.T. Starter Trial, then Novice at Seneca and Surefire. Golly anticipates a move-up to Training soon — he’s already schooling Prelim fences with ease — but says she isn’t in a hurry. “We are just enjoying learning together,” Golly says.

“He is an awesome jumper, and he loves the cross-country — he eats it up,” Golly says. “His ears prick up, and he gets this look of determination on his face. He knows the jumps are his responsibility, and he takes it seriously. He is just a powerhouse. We still have the occasional spooky green baby moment, but we trust each other, so he doesn’t get shaken.” 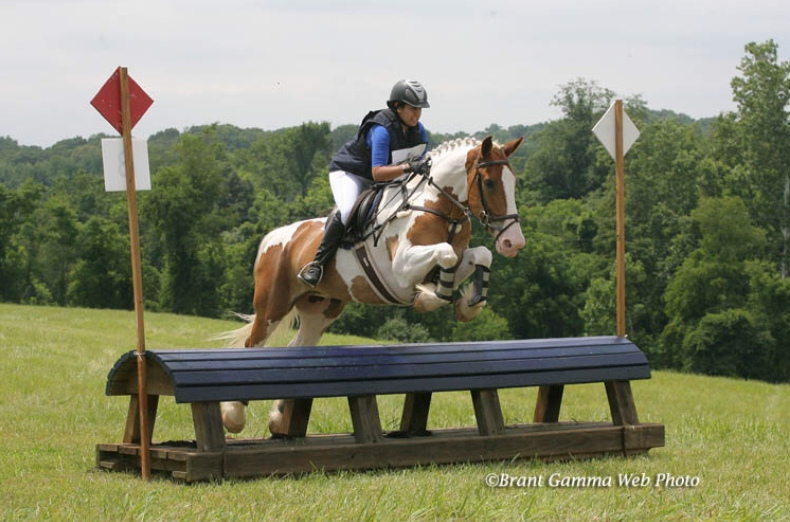 One challenge the pair has faced was that Kadobi has a congenital genetic vision disorder, Equine Anterior Segment Dysgenesis, that is common to Rocky Mountain horses but rare in other breeds. Saddlebreds, which Golly thinks Kadobi has a splash of in his breeding, are one of the few other breeds it has ever been seen in.

“In his case Kadobi has cysts, sacs of clear fluid, that attach and detach and float around in front of his retina,” Golly says. “Sometimes they pop on their own, sometimes they are bad and sometimes he doesn’t notice them. He is not actually blind; it is not a disorder that will ever make him go blind. The best way to understand it is to put your hand on your face and spread your fingers — you can still see fine, but parts of your vision are blocked, and then imagine every so often your hand moves around, and now other parts are blocked. It is unpredictable, but we manage it. It matters because we jump, and we jump high, but the trick is that I listen to him. If something feels off or he is having a hard time of it, I pull him out. We don’t push it.” 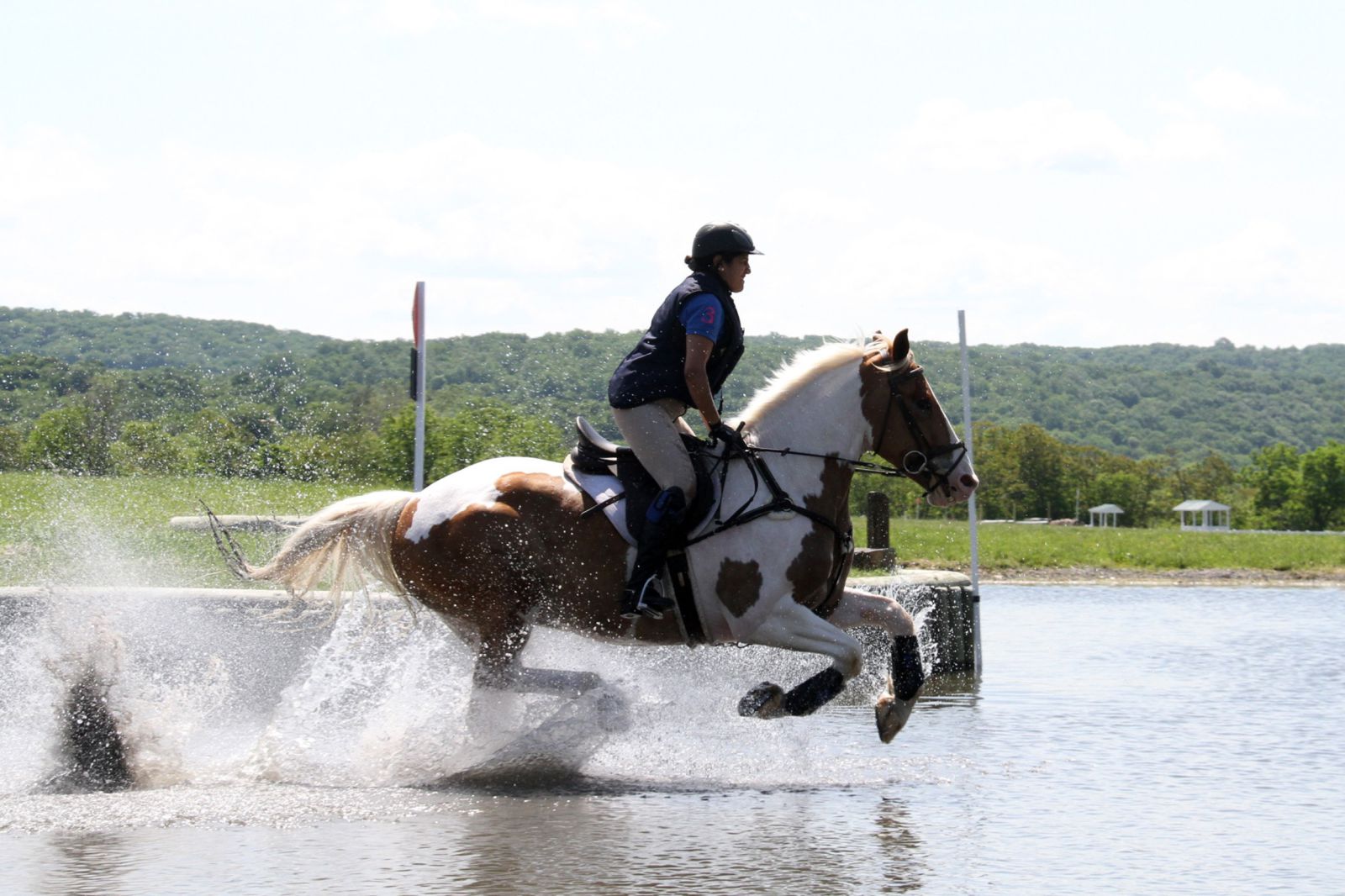 Golly and Kadobi are heading to Ocala in August to be a working student for Leslie Law and Lesley Grant-Law’s Law Eventing, where she hopes they will gain a little polish, particularly in the dressage: “He has the ability and is built so uphill but has had an immensely difficult time relaxing and not being tense in dressage. We are working on it, and I know it will take time, so in the meantime we are just learning as much as we can!”

Golly’s goal for Kadobi, now 7 years old, is for him to become a solid Training horse and someday, if he tells her he can do it, try the move up to Prelim. Again, Golly emphasizes, they’re in no rush — they’re just enjoying the journey and one another. 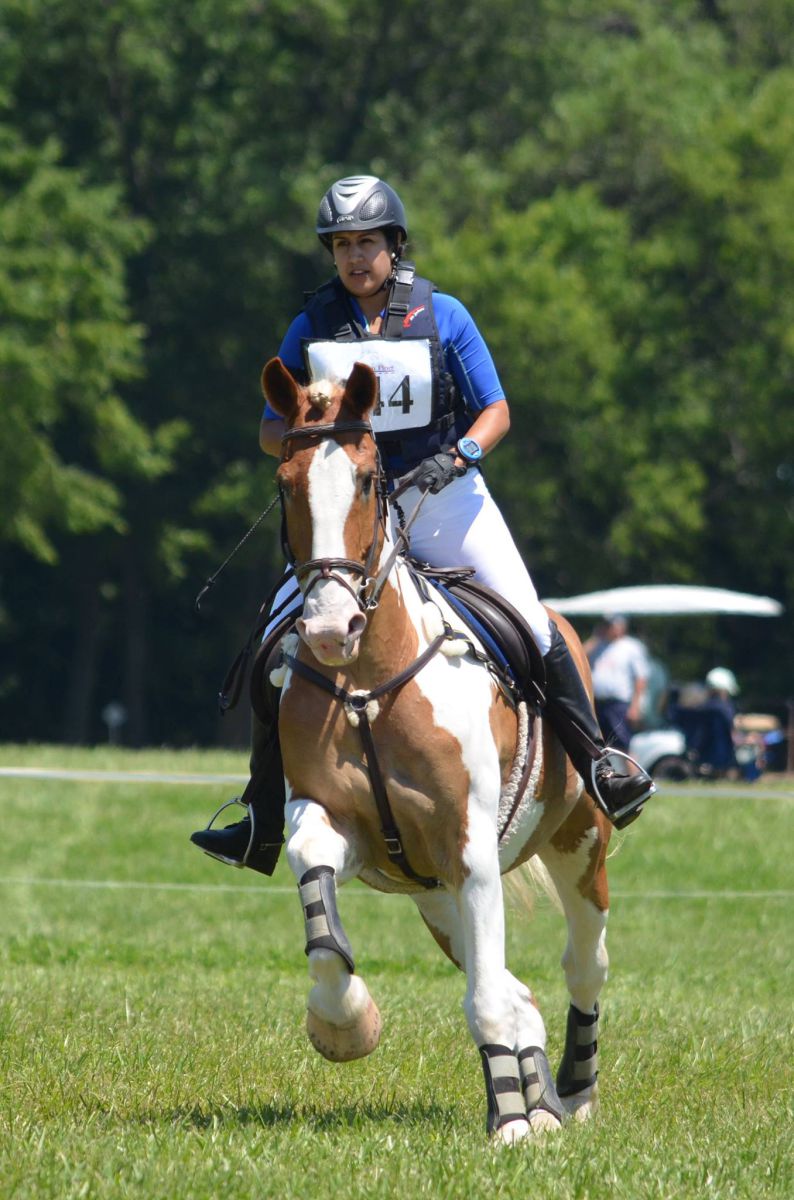 “He is happy that he has found his person,” Golly says. “He knows he will never be hungry again and is enjoying his new life as an eventer. He loves routine and will gladly stick to his end of the bargain as long as you give him his rub down, scratch, treats and grass time! We have an amazing connection; I truly believe this horse would take me through fire if I asked him to. He really is one of a kind.”