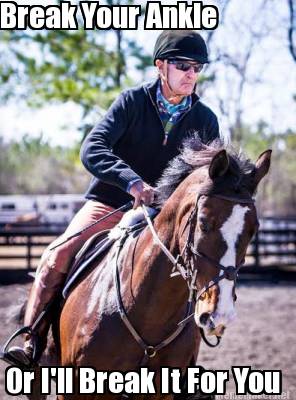 An actual quote….not a joke.

After the excitement of Pine Top Advanced Horse Trials this past weekend, Aiken was host to one of the most eagerly anticipated clinics of the spring season: the George Morris butt whipping session. I was gleeful when I realized it fell right before I left South Carolina, because I’ve always wanted to see if he really is as crochety as I’ve heard, and I wanted to hear all of the wonderfully blunt nuggets of wisdom that he so casually throws about. I wondered what he would make of our scrappy Event riders, and how he would take to our horses, but mostly I was hoping for some great quotes, and I wasn’t disappointed there.

As one of the most respected trainers in the country over jumps, George wastes no time in telling you exactly what you’re doing wrong, and how to fix it. His solutions are not complex, nor are they of a mystical quality, but instead they are simple and effective. As he said, “Nothing has changed in the past fifty years, it’s just when people get stupid ideas and try to re-invent the wheel. Classic never changes, stupidity changes!”. 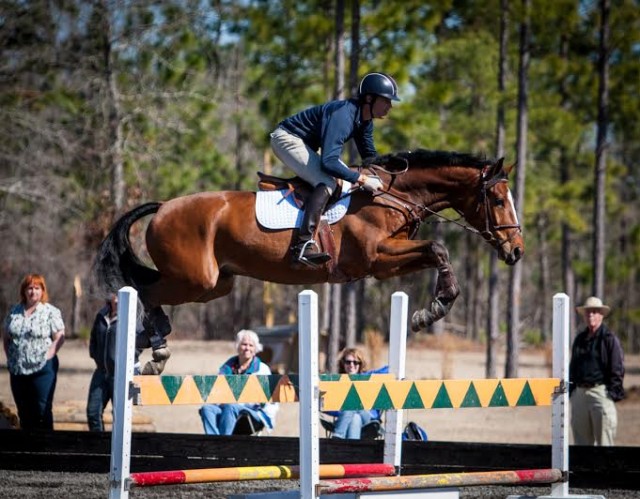 All of the horses began with the walk, and like a pony club school, all the riders dutifully circled the ring. George spoke to the importance of having good contact from the very beginning, “Contact is straight, steady, definite and supple,” he said. As the horse resists, the rider is to raise his or her hands slightly and close the fingers, effectively resisting in the exact proportion as that of the horse. He proclaimed over and over that riders from “the continent” have a pervasive fear of contact, and that it was something with which he vehemently disagreed. 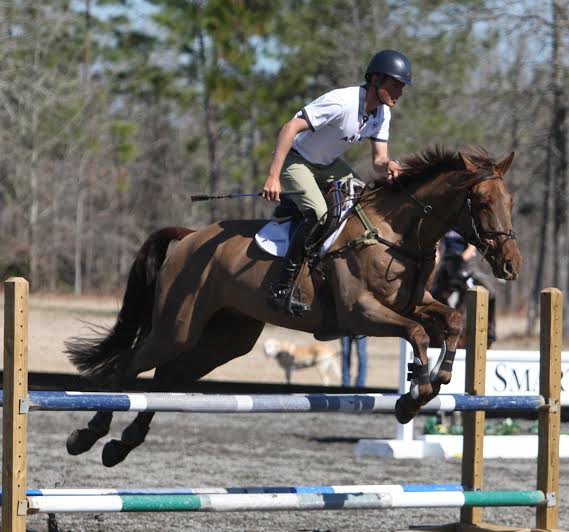 As the warm-up progressed, it became clear that the next principle that George was obsessed with was having the HEELS DOWN. As the first person brave enough in many years to tell Phillip Dutton to keep his heels down more, I salute you, George. As he spoke of the importance of one of the most basic attributes of a good rider, he said that “If a basic is violated, there will always be a consequence to pay. You can’t have hands before you have legs, and that is why I’m very fixated on leg position and weight in the heel”. He explained that an independent upper body and thus the hands comes from a secure lower leg, which is all based in the weight of the heel, and so the whole position comes from one single base.

Erin Sylvester was another one that he picked on for her heels, and for her he imparted my favorite quote of the day: “Either break your ankle or I’ll come break it for you” as he asked her to have a firmer lower leg position. After that was settled, he watched Lillian ride the course, and commented that perhaps she should try out for the Maclay Finals, as she was by far the most proficient in the half seat ride. However, as the jumps got bigger, he did begin to speak about her body in relation to the motion of the horse. “With the motion, in front of the motion, and behind the motion. Only two are correct”. As the jumps got bigger, Lillian became a little too far forward, and he had to ask her to get a little behind the motion for certain jumps, which was unusual for a Hunter rider to be telling to an Eventer! 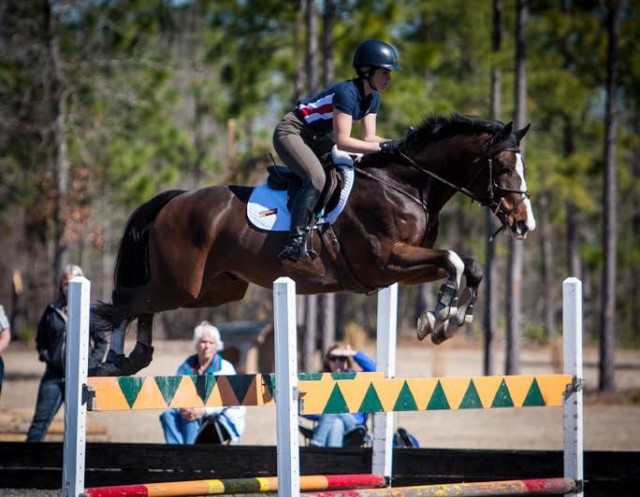 Everyone warmed up over an oxer in the middle of the arena, where many of them were schooled in the art of the half seat, which is not utilized as much in the Eventing world as it is in the Hunter and Jumper world. “The horse should be equally obedient in the half seat as the full seat!” George admonished to several riders who were creating impulsion through their seat instead of with their legs. He informed us that this action was called being an “ass-grabber” and told Boyd that he was guilty of this, which resulted in a few giggles in the crowd.

Next, the riders all got a chance to go over a short course of ten jumps of related distances throughout the arena. The first round through was small, and then after everybody had gone through to his satisfaction, the jumps were raised. Boyd worked on his ability to keep the contact with his horse throughout the course, and Phillip was again chastised for his heels coming up over the fences. After a few short courses, Boyd was complimented on his quick change to suit the exercise, as both his half seat and consistent contact was much improved. Phillip’s horse was quite large, and although a careful jumper, George wanted to see that he was self sufficient, and so he encouraged Phillip to “invite the rail down”. When Phillip saw a good distance, he wasn’t to stuff the horse underneath or crash him through, but simply drop his hands and allow the horse to make a mistake, should he so choose. Harri was very careful, and responded well to this exercise. 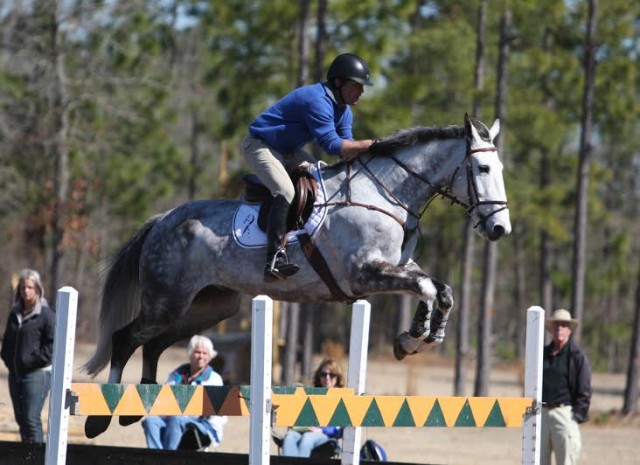 In possibly the dryest humor I’ve ever heard at a clinic, George proceeded to tell us all a joke about lower leg positioning. He told us about a show that he was judging in his father’s hometown of Augusta, Georgia, and after he pinned an amateur ladies hack class, an older competitor came up to him and asked why she had not received better marks. “I told her that I didn’t like her legs, and she replied, ‘That’s not what your father told me thirty years ago!’ But she didn’t have weight in her heels”.

Will was riding a very young horse, whom he told me later has just come into his barn, and he’s probably only jumped him a handful of times. Owned by KBLB Event Horses, this little gelding was incredibly careful over the fences, and needed a confident ride to get him in front of the leg and feeling good about the bigger fences. Will is a master at the subtle use of a stick behind the leg, and when George encouraged it to an extent, Will used it a few times too many on one course. George said, “There’s nothing better than the stick to get them in front of the leg, but you don’t want to get stick happy! Just like women, only use it for one or two on the course, not everyone at the party”. To him, there is a noticeable difference between fences you use the stick, and ones you use the voice and the spurs to educate the horse. 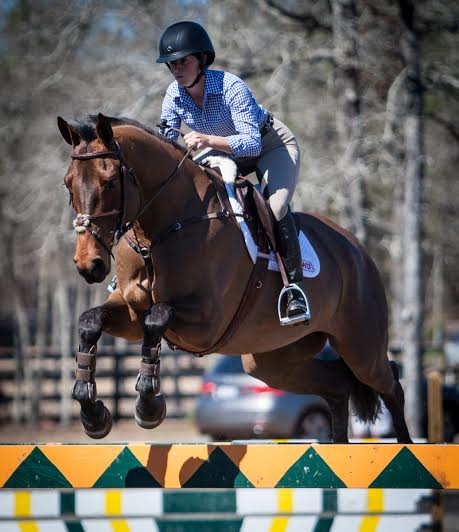 Caitlin was riding Callisto, a cute jumping gelding owned by Tatiana Bernstein, and George was immediately very complimentary about her leg position and control. Callisto, however, had a slight drift to the right, and so they worked on keeping him straight in the air. “When a horse drifts in the air, open the opposite hand, don’t leg him because he’ll get too quick, but keep the straightness with an opening rein”.

Kate Chadderton’s horse, Checkout the Charmer owned by Beth Sokohl, is a TB mare that has competed through the Preliminary level. Initially, these two were rushing through the exercises a bit, and the mare was exhibiting quite a short stride, which made Kate feel the need for speed. George had them do a little shoulder-in on the circle and get the horse listening to the inside leg and using her body a bit more in the canter. Making efficient turns is not rushing, and knowing the difference is key.

To top it all off, George hopped on Caitlin’s horse, after finding out that Boyd’s horse was not so quiet for the mounting. At 76 years young, he wanted to show the riders exactly how and why what he was talking about was important. He showed the difference between his desired body position and that of a defensive position (the “ass-grabber”) and how it affected the horse over the jumps. He jumped a few jumps, and then exhibited how he could be effective in his half halt, without his butt jammed into the saddle, and as this horse was quite attuned to the leg, he didn’t need to try to create impulsion with his seat either. At the end, he said he would quite like to keep Callisto for himself!

A day with George Morris was everything I had hoped for, and more. He was effective, efficient in communicating what he wanted, and most of all, he was accurate in his assessments of both horses and riders. To me, it’s a delight to watch a master at work, and I think we can all learn a little from different disciplines and different generations. Please enjoy the videos below, and for goodness sakes, keep your heels down!

The warm up-fence, always an oxer.