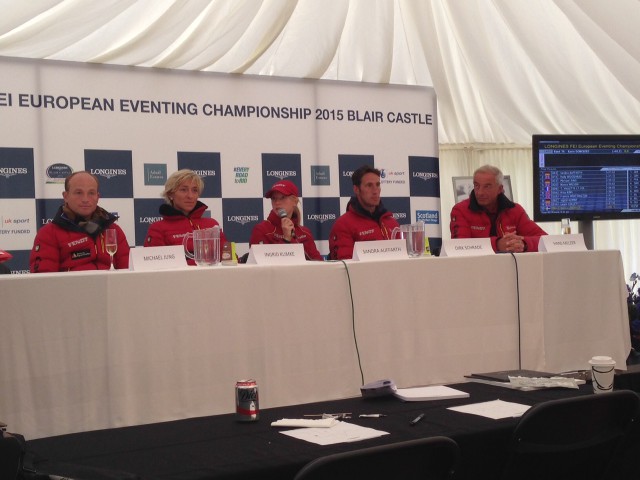 Francis Whittington has waited 20 years since he represented Team Great Britain on ponies to earn his senior flag, and he punched the air in jubilation as he finished his test on Easy Target. “I’m over the moon with Smokey this week, he’s been working really nicely and then to go in there and to do the test that I can be really proud of, I’m very happy with him. He was spooking at some of the signs on the boards and he held it together and for myself and for his owner, Catherine Witt, I’m thrilled, so very happy.

“Looking ahead to tomorrow, for me I think it’s important we just get out, we get into a good rhythm, I’m not one to make lots of plans, I’m one to do it as naturally as I can and not stress about my distances. I am clear once I break the course down where I might be down a little bit on the time, and there’s areas where I know that I can start to pick that time up again. What I want to make sure is that I don’t take any liberties and that I’m 100 percent safe.” 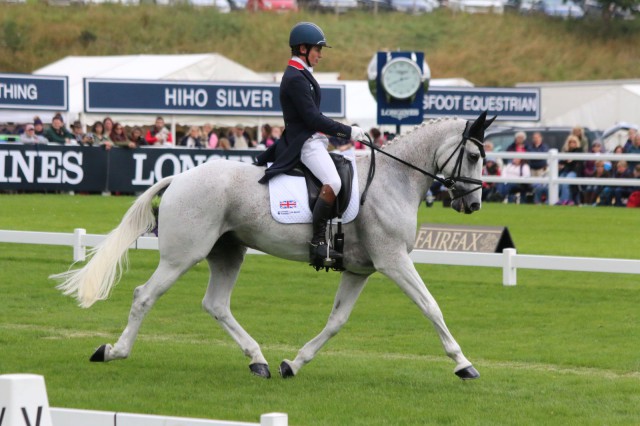 “Seeing the girls go out yesterday and perform such amazing tests and they truly did fantastic tests (Team GBR’s Holly Woodhead, Nicola Wilson, Laura Collett and Kitty King), I thought I’d best start concentrating and try quite hard! In there I’m really pleased with the test we did. We were having a bit of tension where he was spooking at the signs around the arena, which I controlled but that came out slightly, other than that I’m very happy.

“I think the cross country course is going to be strong enough, the big thing that plays a massive part here as I understand it, having not been here, is the hills and the terrain, and that takes it out of them, and I think we have to ride the course wisely so that we’ve got plenty left on the flat to catch up the time coming home.” Francis will go out on cross country tomorrow in seventh place with everything to play for. 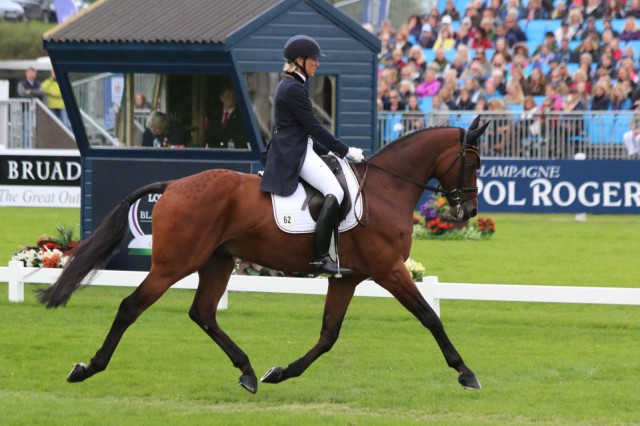 Right behind him in eighth is FEI Champion Ingrid Klimke, who was also delighted with her ride on Horseware Hale Bob. Listening to Ingrid talk about her test is a joy in itself and not unlike her riding — expressive, animated, engaging — her blue eyes sparkle, her hands are constantly moving, yes I admit it … total girl crush!

“I’m very pleased because Horseware Hale Bob did such a wonderful job, he was very excited, the wind started blowing and I knew outside he thought maybe it was cross country, but I said no no, we have to behave and then he was so soft, listening. I could easily ride him around. He was through and soft and supple, and I really could think of my position and enjoy it.

“He has a very Thoroughbred canter, which is very good for the cross country but for the dressage they want it more cadence-y and shiny. Then he has to collect points by doing everything very correct, and that is what he did. He really did all the movements like I want and a little bit expressive in the change so I could ride up through it, and he tried to make it a little bit bigger.

“In the extension I always ride as much as I can and always show that he is so through with the transition, so me as a rider I can only show that he is very well-trained and can go forward, backward, sideways, whatever with very soft aids ,and he was really listening today, although he was very excited.”

Ingrid is equally excited to attack the cross country tomorrow: “The course is perfect for him because he was a hunting horse before so he’s very balanced, he’s very good on his feet, and his canter is very flat and economic so condition wise while he has lots of Thoroughbred, he’s always full of energy so I’m really looking forward to tomorrow. I think it will be great fun.

“As for the team, today is history. That’s what Chris Bartle always says; it’s not a dressage competition. The rider must be very focused so nobody makes a mistake and stays in their bubble and listens to and feels their horse and just rides it as precisely and supportively as we can.” 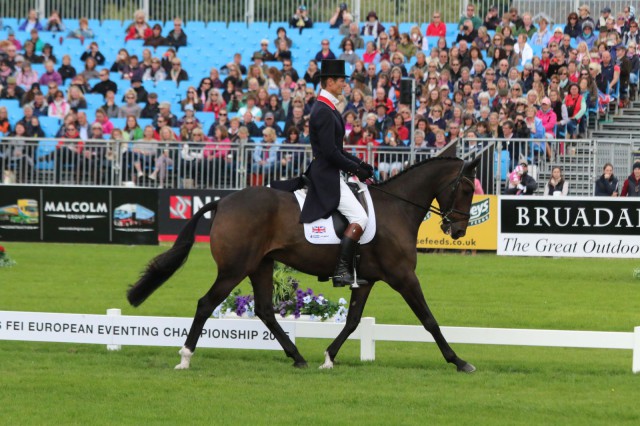 William Fox-Pitt and Bay My Hero. Photo by Samantha Clark.

Niklas Lindbäck moved into the top 10 with a stunning test on Cendrillon, scoring in the 20s in the early half and earning a final mark of 38.1 on the scoreboard. This puts the Swedish team in fourth overnight on 119.4 behind overnight leaders the Germans on 102.7, Greath Britain in second on 112.5, and France right behind them in 3rd on 115.2.

Surprisingly William Fox-Pitt and Bay My Hero are the drop score for Team GBR after a disappointing dressage score of 43. Their trot work looked short and tense and actually unlevel at times; since then the horse has been re-shod.

Cross country begins tomorrow at 11 a.m. local time/6 a.m. EST, and the rain is forecast to start at 9 a.m. We’ll be bringing you as much action as we can from the Longines FEI European Championships at Blair Castle, and we appreciate you visiting Eventing Nation. Stay tuned for a video interview to get to know Holly Woodhead a bit better later on, and a few more photos on our Facebook page, but in the meantime — Go Eventing! 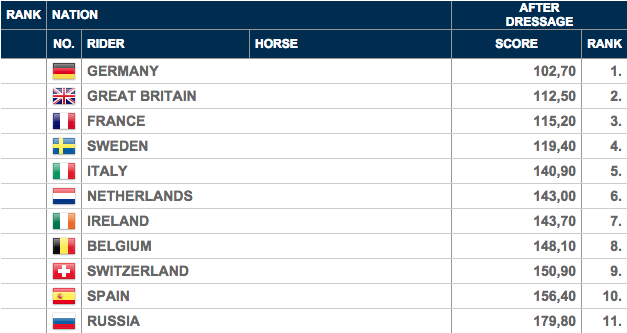