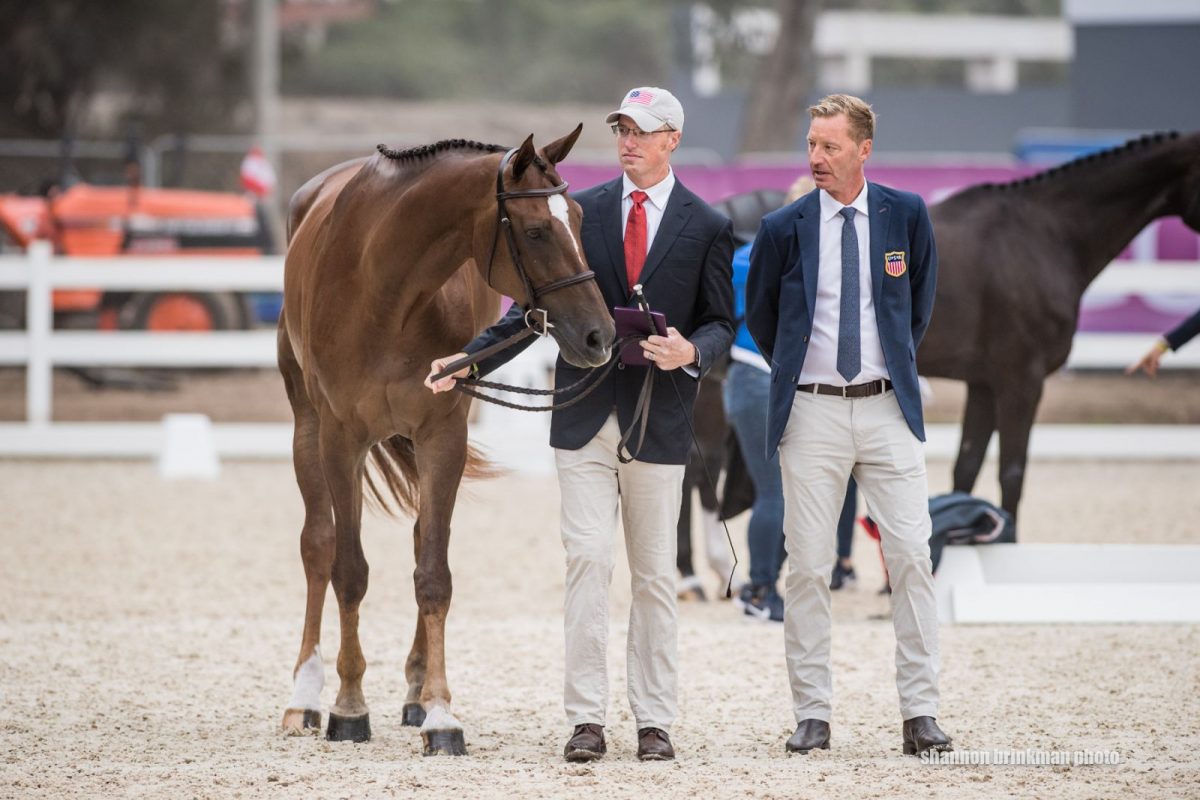 Erik Duvander took the reins of Eventing High Performance from former chef d’equipe David O’Connor in 2017. While it has been all eyes on Tokyo nearly since the beginning of Erik’s tenure, he emphasized an even bigger picture during his presentation this week: Los Angeles 2028.

“It’s been a year of challenges and changes and it’s just proven one point on how resilient our riders are, how resilient our event organizers are,” Erik said in his opening remarks. He also said that he could see a silver lining to the unprecedented cancelations: the benefit of extra time without the looming pressure of the Olympics (or competing, period).

“Utilizing that time was good,” he explained. “I personally felt our team would have been pretty good for the Olympic Games in 2020, but for 2021 we just had one more year to put a few more things in place. Being an optimistic person, I saw that as an advantage. I must say, the riders really stepped up and did the homework and perfected their technical skills.”

Erik noted some of the travels he’d made around the U.S. throughout the year, mentioning that another positive to come out of the compressed competition schedule was a higher number of entries at the events that were able to run. This had the added effect of creating more of a “competitive culture” that put riders on the spot to turn in their best performances.

“On the East coast we had several fantastic events,” Erik commented. “We started off with a really great competition at Great Meadow … Tryon put on a fantastic competition, Unionville also had 50 starters and that became a great competitive class as well.”

Erik also noted the number of personal dressage bests that happened in the latter part of this year, once again crediting the extra time spent perfecting the details at home.

Looking to the West coast, Erik nodded to Rebecca Farm, Woodside and Galway Downs and reiterated his intention that the area is ripe with talent and quality events. “It shouldn’t feel like a need for anyone on the West coast that they have to go to the East coast to become world-class riders,” he said. “I think the job that’s been done out there has been truly amazing.”

Finally, Erik made mention of the incredible efforts at Morven Park and Maryland in preparation for their forthcoming inaugural CCI4*-L and CCI5* events, respectively.

“I’m a great believer that competition drives riders to be better,” Erik said. In the four-star divisions that often ran in excess of 50 starters, riders had to double down their efforts to finish the weekend at the top of the leaderboard. Much of a rider’s success at a championship comes down to cross country — do you have what it takes to go out and get the time, cleanly? For some riders, Erik noted, this notion comes more naturally than it does for others. “To go quick on cross country is a bit of mindset but also takes a bit of guts,” Erik explained. “You can’t force that speed onto people — that has to be something that comes naturally.”

Erik also explained that he had been in close contact with show jumping course designers this season, asking them to up the ante with more technical, square tracks to further test the top horses and riders as they would be at a championship.

A key takeaway from the MARS Tryon International CCI4*-L was the four riders who emerged at the end on sub-30 finishing scores. “If you can’t finish at a sub-30 at a four-star or a five-star, we won’t be able to be competitive at the international stage,” Erik said, adding that it was very encouraging to see these four scores (earned by Boyd Martin, Phillip Dutton, Woods Baughman and Doug Payne) on one of the toughest competitive weekends of the year.

Opportunities for the Pathway Program

Notable here is the concept of Eventing 25 Assessment Sessions, which were started this year as a way for selectors to have more face-to-face time with candidates rather than primarily relying on applications and videos. Athletes will ride for selectors and have private interviews during these sessions, which Erik anticipates happening in Ocala, Aiken and on the West coast in 2021.

USEF Managing Director of Eventing Jenni Autry spoke about the pivoted North American Youth Championships, which will now be run as the USEF Eventing Youth Team Challenge. This new format will expand the competition to multiple events throughout each season followed by a championship on each coast. The age limit for the Youth Team Challenge will be 25, eliminating the former, more restrictive age requirements for NAYC. It is the hope of both Erik and Jenni that this new concept will help bring one more layer to the Pathway Program and welcome more riders into the pool of talent.

“The Youth Team Challenge will be an evolution of the NAYC,” Jenni commented. “It will give more athletes across a broader range of ages opportunity to compete more on both coasts.”

“How do we create more longevity for our horses?” Erik spoke to the concept of proper horse management and of looking at the “greater good and future success” when implementing plans. “It’s important that we look very closely at the horses’ plans and where we are targeting them,” he explained. Through the production of young horses and a more tuned-in approach to how these horses’ schedules are put together for optimal results with minimal damage, Erik hopes to continue building depth of talent through the Pathway Program. Jenni also noted that a Strategic Calendar Task Force has been in the process of formulating a new process for building and managing the calendar of upper-level events so as to more efficiently prepare horses and riders along the pathway. The USEF is looking at implementation of this project by 2023.

Looking to this year’s Winter Training Lists, Erik spoke to the notion of producing horses not only for the short-term goal (Tokyo) but for the long-term (looking as far ahead as Los Angeles 2028). “(Longevity is) an area we really have to improve,” Erik said. “It takes a long time to get a horse to world-class. They need that time and the riders need that time. We’re not looking at quick fixes.”

Johann Hinnemann was the 1986 team gold and individual bronze medalist at the Dressage World Championships and has also been the coach for the German and Dutch National Dressage Teams as well as the Canadian Olympic Dressage Team.

Peter Wylde won team gold in the show jumping at the 2004 Olympics in Greece and also achieved individual bronze at the 2002 World Equestrian Games in Jerez.

Erik commented on the horsemanship and teaching styles of each incoming specialist and how they would complement the High Performance Program with the intention of bringing out the best in each horse and rider.

What’s next for 2021? With any hope, we’re in for a more “normal” year, at least in terms of the number of competitions. This is, of course, heavily dependent on the ever-shifting coronavirus pandemic, but with the impending availability of a vaccine there is hope.

Erik also said that his eyes are also fixed on the Los Angeles Olympics in 2028 — a homecoming as the first U.S.-hosted Summer Olympics since Atlanta in 1996 and also the site of the last American team gold medal in 1984.

“I keep having L.A. in my mind,” Erik said. “Now is the time to buy the younger horses in order to develop them and for riders to develop partnerships with them … I quite often say ‘that’s a Los Angeles horse,’ but it’s not that far away and if you don’t put things into place now, it will be too late in two or three years’ time.”

The USEA Annual Meeting and Convention continues virtually today — click here to view the schedule. And don’t forget to tune in at 2 p.m. EST tomorrow (Saturday, December 12) for the Annual Meeting where we’ll learn the winners of this year’s awards as well as hear from keynote speakers Liz Halliday-Sharp and Piggy March.