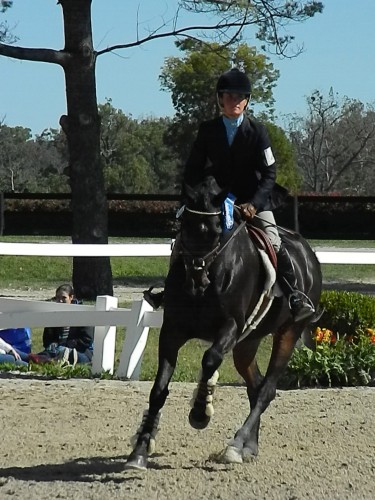 Jocelyn Hawe and Going Going Gone on their victory lap in the P3D. Photo by Sally Spickard.

The Three Day divisions have wrapped up here at Kentucky Horse Park, and Jocelyn Hawe and Going Going Gone jumped a beautiful double clear show jump round to take home the win. Jocelyn looked confident and solid all weekend, and I’m sure she is thrilled with the win in this long format event. 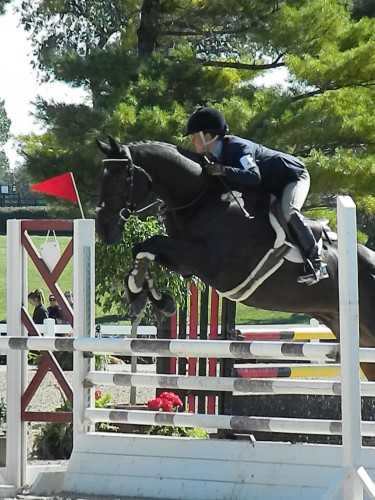 While the Prelim division was small, the competition was close as less than a rail separated the top three going into show jumping. After a grueling weekend that requires an immense amount of fitness on the part of both horse and rider, all combinations looked fresh and fit to finish off their weekend. 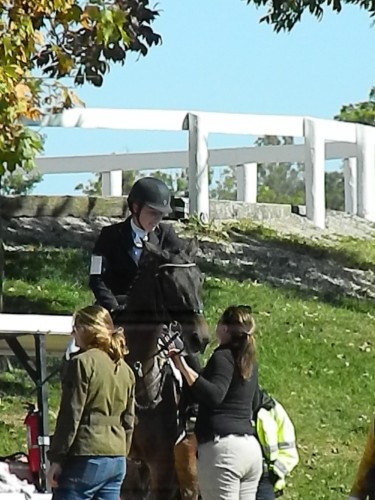 Andrea Johnson gets some congratulatory feedback from coach Megan Moore aboard Wapentake. Photo by Sally Spickard.

Andrea Johnson had a great weekend at her first three day with Megan Moore’s Wapentake. I was salivating over this horse all weekend, so I caught Megan and Andrea back at the barn after Andrea’s show jumping round. Andrea came into today in the lead, but she had one rail on course which dropped her down to second. She was no less thrilled, however, after having a rocking weekend here at Midsouth. I filmed a brief interview with Andrea but my camera decided to die halfway through so I am bringing you the cliff notes. Andrea got the ride on Wapentake (“Jerry”) after owner Megan Moore discovered that the horse had taken a strong disliking to her. Megan said “I gave him a shot one time when he was a baby, and he hasn’t liked me since.” This sentiment is still strong, it appears, as Jerry gave Megan a hefty bruise on her thigh after kicking her this weekend! I caught video of Andrea’s round, and will update this post as soon as I can get the video uploaded.

In the Training Three Day, the leaderboard shook up a bit after show jumping. The course has proven to be very influential for all divisions this weekend, and the Training was no different. Overnight leader Waylon Roberts and Bill Owen dropped two rails down to finish in 6th place for the weekend. DeAnna Burke and her gorgeous Dutch Warmblood, Davinci, took home the top honors after jumping a lovely double clear round to finish on her dressage score. Unfortunately I was unable to get any photos from the Training show jumping due to some camera issues, so I send my sincere apologies to all competitors!

Check out Andrea Johnson and Wapentake’s Prelim round: