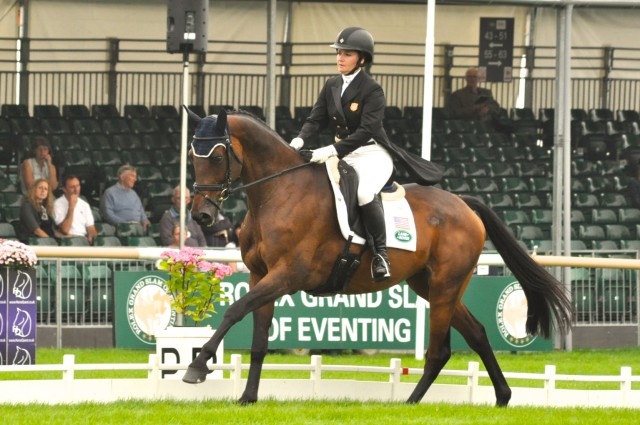 As our last American to compete here at Burghley, all eyes were on Hannah Sue Burnett and Harbour Pilot as they cantered down the centerline in their debut at this hallowed competition. They delivered a solid test that improved as it went along and scored a 48.5 for the conclusion of this phase. She is currently in 10th place, with eight more competitors to go this afternoon.

We interviewed Hannah after her test, and she said that she felt like the first half of her test was tentative because William started with a little bit of an attempt to canter after the first halt, and she wished she had been able to push for more brilliance in the trot work. “He was good; he’s always really obedient and is really thoughtful in there; he doesn’t get crazy or anything,” she said. “The canter work was much better.” 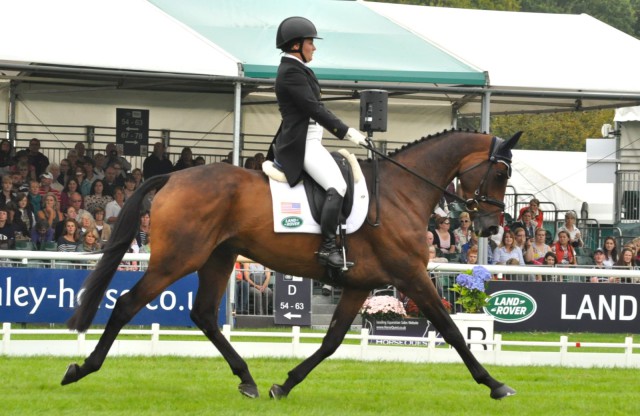 Most of the U.S. riders have walked the course three times already and are planning to walk one to two more times before their runs tomorrow. Hannah goes last of the U.S. contingent and will have the advantage of being able to gather information from her fellow American riders before she sets out, and she is looking forward to the course. “I think its going to suit my horse pretty well; it starts out not easy by any stretch of the imagination, but it lets you get going and have a rhythm,” she said.