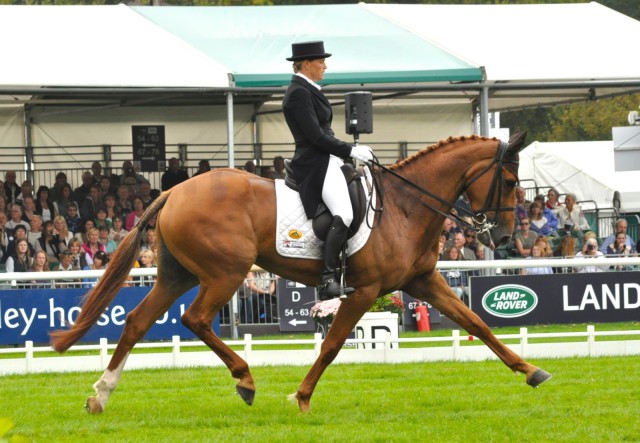 Karin Donckers & Lamicell Unique scored a 46.3 for sixth place at the break. Photo by Kate Samuels.

The morning session of dressage is over at Burghley, and we are narrowing it down to the last 16 competitors this afternoon. As we reported earlier, Jock Paget pulled off his usual incredible performance in the arena for a 38.8 with Clifton Promise and is currently our leader, as well as the only combination in the 30s. We didn’t see anybody else come close to his performance, but we did see three more riders sneak into the 40s this morning.

Karin Donckers is fresh off a sixth-placed finish at the WEG with Fletcha Van’T Verahof, and just completed a really lovely test with the 10-year-old chestnut mare, Lamicell Unique, scoring a 46.3, which places them neatly in sixth place. She remarked after the test that this is the mare’s first CCI4*, and while she is still green, she has high hopes for her. Karin is a very admirable and accurate rider, and I was quite impressed with the mare’s focus in the arena. 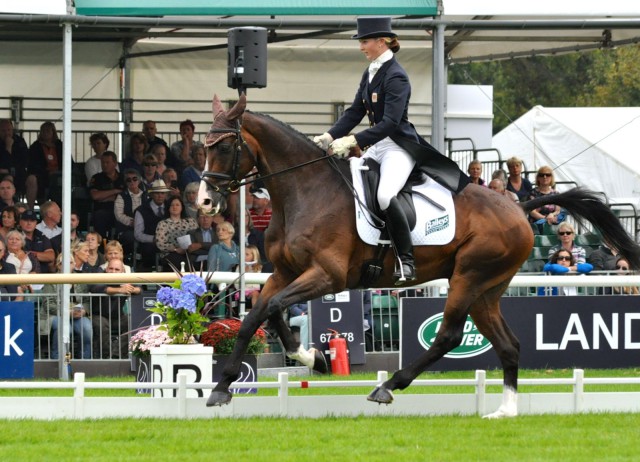 Georgie Spence had a lovely test on Wii Limbo for a 47.7 and 8th place. Photo by Kate Samuels.

Georgie Spence also had a super test on the small but mighty Wii Limbo, scoring a 47.7, which is a full seven points better than their last test at this level at Luhmühlen in the spring. They were sadly eliminated there and are having a second attempt at a first four-star for the 11-year-old gelding. He looked a bit spooky as he cantered around the outside, but Georgie settled him very well through some exceptionally tactful and quiet riding.

The Australian contingent continues their domination with two more riders in the top 15, with Bill Levett and Improvise sneaking just inside the top 10 on a 48.7 and Murray Lamperd riding Under The Clocks sitting in 12th with a 50.2. This gives them a total of four riders in the top 15 after the dressage is completed, as all their riders have now completed their tests. Murray Lamperd also may have stolen the title for “Best Use of Bling” from Clifton Promise, as I don’t think I’ve ever seen such a metallic browband. 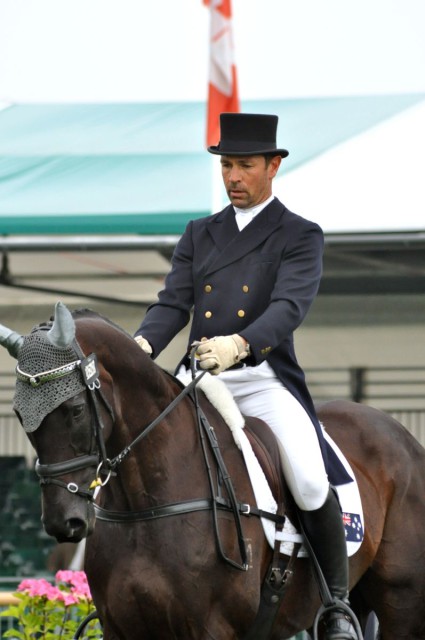 Murray Lamperd and Under The Clocks put in a good test for a 50.2 for Australia. Photo by Kate Samuels.

Contrary to popular belief, it seems to me that the dressage judges have become more strict and picky today than they were yesterday. Christian Landolt is at E, Angela Tucker at C and Ernst Topp is at M, and they seem to have collectively decided to up the ante today, where nothing but brilliance can make it into the 40s. A reserved but accurate performance was simply not enough today, where you had to be expressive and incredibly distinct with your transitions within the gaits. As always, lead changes turn out to be the undoing of many horses, and several combinations have come unraveled in the canter work.

Hannah Sue Burnett and Harbour Pilot, our fourth and final American combination, are still to come at 2 p.m. BST (9 a.m. EST), leading off after the lunch break. We also have heavy hitters such as Piggy French and Jakata, William Fox-Pitt on Rolex winner Bay My Hero, Oliver Townend on Armada, and Andrew Nicholson finishing the day with two-time winner Avebury. Stay tuned for much from Burghley.