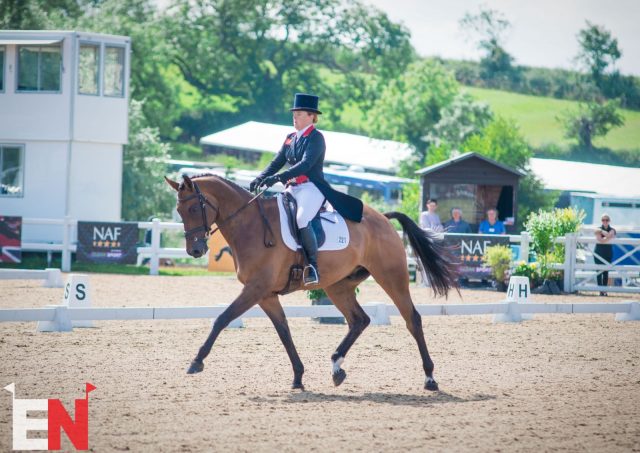 “The first Hartpury I ever came to, it was just a little event in the back field – there wasn’t an indoor or anything, it was just a very small agricultural centre,” says Pippa Funnell with a smile. Now, of course, the NAF International Hartpury Horse Trials looks rather different – held within the grounds of a university campus, best known for its industry-leading equine degrees, it’s one of the best-equipped internationals going.

As you stand atop the mound overlooking the expansive, green-fringed outdoor arena, the international-standard indoor, a bevy of classrooms and lecture theatres, and one of the best-stocked equine therapy centres in the world, you can be forgiven for thinking, “seriously – people go to university here?!” It’s hard to imagine anyone doing a keg stand here (not least because this is England, not an American Pie film), or stumbling bleary-eyed out of residence halls at 2 in the afternoon. In today’s sparkling sunshine, it’s all rather joyous and surreal, the architectural embodiment of two fingers up at anyone who ever said you can’t go to college for horses.

“It’s astonishing how it’s grown over the years,” Pippa says. “It’s one of our top venues in the country now – we come here jumping, too. We’re so lucky to have it.” 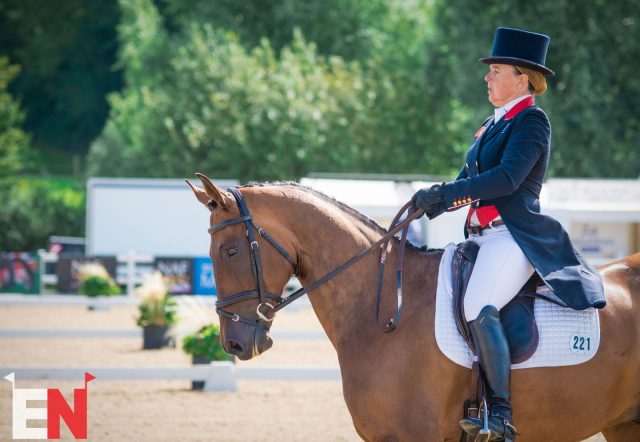 It’s not just a sightseeing trip for the enormously experienced British stalwart, though. A characteristically competitive score of 24.8 with MGH Grafton Street started Pippa’s day on an enviable – and not unfamiliar – track.

“He’s a really good boy, and he’s improving and getting stronger with every test he does,” says Pippa. “He’s always been pretty solid in this phase, so it’s just about getting the other bits together – but he’s improving, and fingers crossed by the time I get to Burghley he might be good. We’ll see!”

She also rode the nine-year-old Maybach to a provisional top-ten spot, scoring a 28.8 despite a break in the counter-canter.

“He wouldn’t have the same strength, but I was really delighted with his trot work. He just got a little bit bright in his canter and struggled a bit with that counter-canter. He recovered it, but a lot of his issue is just getting stronger. The system I’m doing with him is absolutely right, and now it’s just about being patient and not getting too greedy.”

Armed with an endless string of homebred and sourced showjumpers and eventers at her Surrey base, Pippa is arguably one of the country’s leading producers of young horses. When you see her ride two very different horses, each occupying a different end of the experience spectrum, it’s easy to see why.

“When you ride so many different horses each day, one of the things you always have to bear in mind is that you might have a system you believe in, but every horse is so individual in the way they think and how they’re built that you have to change the way you ride to help them,” she explains. “99% of horses don’t want to be naughty – it’s up to us to get inside their heads and work out how to get the brain on side. The brain comes on side when you ride them to help them, to help their physical build. Some people might have come out of that test on Maybach and been cross about the fact that he’d changed, but actually, he didn’t change because he’s naughty, he changed because he struggles to sit in the canter. Where I possibly went wrong is that I spent five minutes too long on him – that’s it. He had a bit of time off in the spring and although he’s cardiovascularly fit, he’s lost some of that topline muscle tone. It’s a bit of a thinking game – you have to think about each individual horse.” 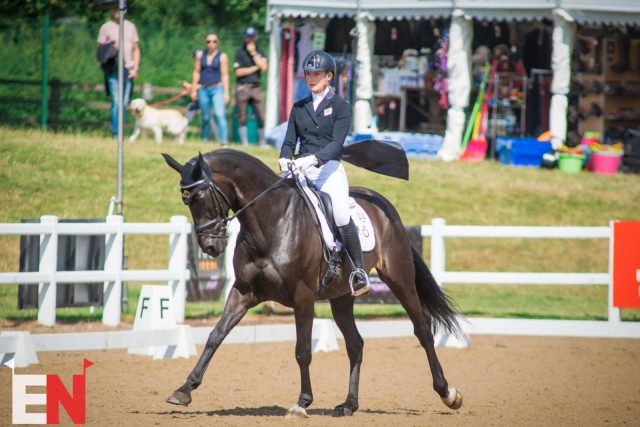 Despite an enormously successful day, Pippa certainly can’t rest on her laurels – Emily King and Brookleigh might have to be content with second place overnight, but their score of 24.9 keeps them well in the hunt. This will be a fourth international start for the pair after a tendon injury saw the seventeen-year-old gelding sit out three seasons. Earlier this summer, though, he proved that the break hadn’t dulled his competitive spirit when he added just a single time penalty to his dressage score of 23.6 to finish third in Bramham’s CCI4*-S.

“It’s so nice to go out there and feel like he’s enjoying his job – he had a bit of a wiggle at one point, but it’s great, because it shows how well he’s feeling,” says Emily, who made her five-star debut aboard the former Clayton Fredericks ride in 2015, finishing fourth. They then headed to their first Badminton in 2016, producing the goods yet again to lie second after dressage. But it wasn’t to be: a fast and classy clear round across the country was scuppered by a surprise fall at the penultimate fence. But after three years without her horse of a lifetime, Emily isn’t wasting a moment on regrets. 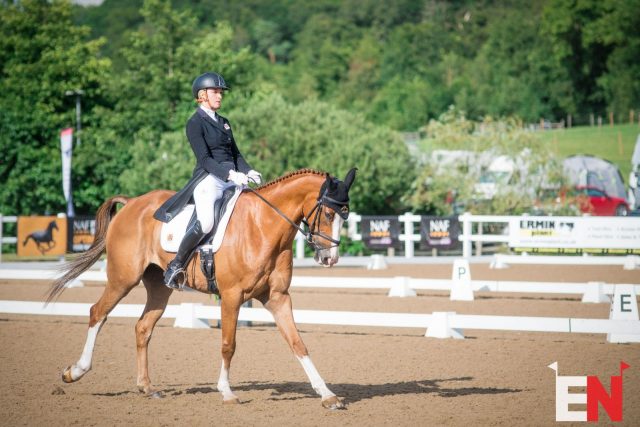 “It’s so lovely to just have my two boys here this week,” laughs the 23-year-old, who left her family home in Devon to set up shop with boyfriend Sam Ecroyd in Cheshire last year, and is kept busy producing, competing, and selling a string of exciting young horses. 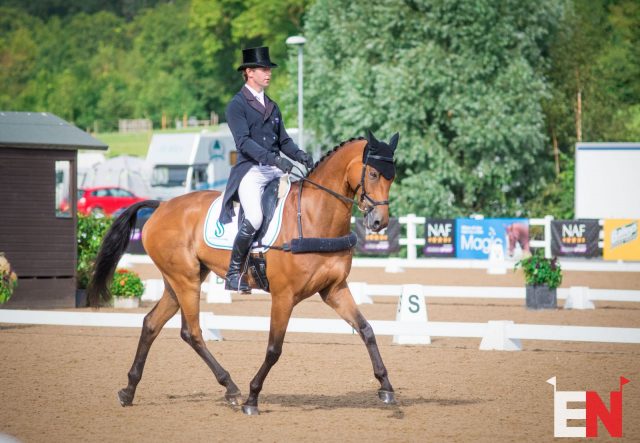 Emily shares third place with Australia’s Kevin McNab, riding Scuderia 1918 Don Quidam. This is one of a small string of horses provided for Kevin by the luxury footwear company, which also owns some of Holly Woodhead’s mounts, as well as several international showjumpers.

“[The partnership with Scuderia] is something we’ve been working on for a few years, and it’s really coming along now,” says Kevin. “It’s gradually getting to the point where we’ve got some horses to a fun place, so the work is beginning to show, but it’s actually not that new of a relationship.”

Originally produced by Hannah Bate, Don Quidam contested the Blenheim eight-and-nine-year-old class in 2017 before Kevin took over the ride. He returned to international competition the following autumn, showjumping internationally in Lier before making a calculated ascent back to four-star. Though Kevin opted to withdraw him before cross-country in his last run at Barbury, he’s enjoyed three top-ten finishes at CCI4*-S (Luhmühlen, Burnham Market) and CCI4*-L (Sopot) previously this spring. 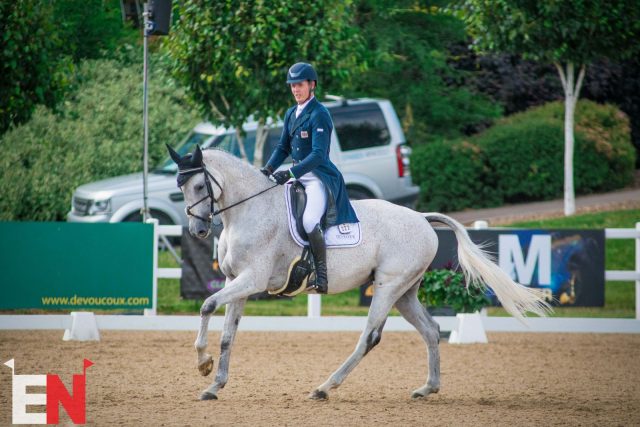 Will Furlong and Collien P 2. Photo by Tilly Berendt.

Young British rider Will Furlong showed a continued proclivity for this phase with Collien P 2. The 2019 season has seen the pair push their low-30s scores down into the 20s, and while today’s score of 26.5 doesn’t quite match the lofty heights they hit when posting a 23 at Burnham Market this spring, it does set them up well for their week. They sit fifth at the halfway stage. 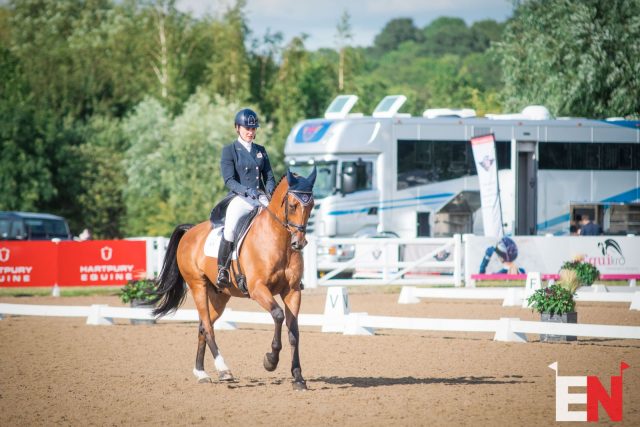 Consistent dressage performers Millie Dumas and Artistiek lie in sixth place provisionally on a score of 27.5, while Will Rawlin and his Bramham podium partner VIP Vinnie showed that they’re not just a flash in the pan. Their score of 27.8 sees them hold onto seventh place. 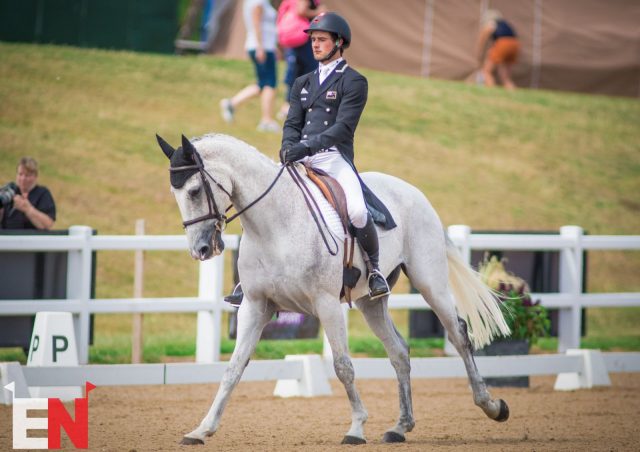 New Zealand’s James Avery proved the potency of a new partnership, delivering a classy test with Aloha for a 28.1 and overnight eighth. This is just James’ third international with the fourteen-year-old Irish Sport Horse, the ride of which he took over from Matt Heath at the beginning of this year. They’ve racked up top three finishes in three-stars at Tattersalls and Camphire, and this weekend, they’ll make their four-star debut as a partnership. This is one of those interesting horses who seems to have been ridden by just about everyone at some point – he was produced by Jonelle Price, and then briefly ridden by Irish rider Brian Cournane and Oliver Townend before Tiana Coudray took over in 2015. She had the ride for a year, and then the gelding had a year out before Matt took over. Now, with James in the irons, he seems to be going the best he ever has: in their two internationals together, they’ve produced dressage scores well below his average and they’ve delivered two FODs – the only FODs of Aloha’s career.

The 104 strong CCI4*-S is fully stocked with major names, among them some of the horse-and-rider combinations we’ll be watching at the Longines FEI European Championships and the Land Rover Burghley Horse Trials. Among tomorrow’s showpieces are Sarah Bullimore and Reve du Rouet, first reserves for Great Britain’s Luhmühlen squad, as well as Piggy French and her two top horses – Burghley-bound Badminton victor Vanir Kamira and team ride Quarrycrest Echo. We’ll also get a chance to see World Number One Tim Price, who brings forward Bango and Ringwood Sky Boy, both of whom head to Burghley next month. Tom McEwen and Tina Cook will also enjoy final runs on Toledo de Kerser and Billy the Red, respectively, before a trip to Luhmühlen in two-and-a-half weeks’ time. We’ve got two Americans in the mix, too – Lexi Scovil will ride Chico’s Man VDF Z, while Katherine Coleman pilots Monte Classico.

There’s no live stream from Hartpury, unfortunately, but keep it locked on to EN – we’ll bring you everything you need to know from this pivotal event.

The top ten after the first day of dressage at Hartpury.