I am in heaven! What coach could not be in heaven watching the Rio Olympics? Every day produces more stories of great coaching and extraordinary exploits that coaches and competitors can use to take their own performance to new levels of excellence. Some only look at their own sport for wisdom but that is foolish. The fundamental lessons are evident in all sports and the cross fertilization between sports is a hugely valuable resource.

I always look at other sports to test my own core values and training ideas. Not a championship goes by without a little tweak here and there, and I find the Olympics a nerve jangling powerhouse of ideas and stories that can only add to my coaching, and add to what I call ‘The GO! Rules.’

I am so proud of my Micklem bridle and the now tens of thousands of horses who have a more comfortable riding life, but in truth I am most proud of two other creations of mine. Firstly my structure and priorities for all riding both in dressage and jumping, ‘Constants and Variables,’ and secondly ‘The GO! Rules,’ that is my structure for improving performance for all performers. Rule No. 2 is ‘Have Another GO!’ (with the help of a coach to create a new personal best).

As I watched the female hammer throw competition a powerful new story was added to my coaching weaponry in relation to ‘Have Another GO!’ The young British thrower Sophie Hitchon came to Rio with the hope of being competitive despite never winning a senior medal before and history being against her. No British woman had ever won a medal in a throwing event and the last man to do it in the hammer was in Paris 92 years ago.

From the start things did not go well. She only just qualified for the final, 11th out of 12, and then mistimed her first throw in the final, sending the hammer pounding into the side netting. Her head dropped and for a brief moment she thought of the times in the past “when I was ready to not do this anymore.”

Then she looked at the unmistakable sight of her moustached and rock solid Swedish coach Tore Gustafsson in the stand and she knew that it was worth having another go and giving it her all. “He’s the best coach ever,” said Hitchon afterwards, “we both knew that I had it in me.”

Her second throw left her in bronze medal position but she was soon pushed down into fourth place, and the throwers in front of her were producing extraordinary throws, including a new world record byPoland’s Anita Wlodarczyk who bettered her previous mark by more than a metre. This was disheartening especially as Sophie’s next throws were not her best. My fourth and fifth rounds were a little bit shaky.”

But as Sophie approached her last throw she did not give up. “I was just trying to execute my technique. I knew I wasn’t quite pulling it together and I knew if I could pull it together it was going to go far. I just kept believing that.” So with the mental support of her coach Tore Gustafsson in the stands Sophie had another GO! It worked! With her last throw she secured a bronze medal with a new personal best and national record.

This story has special resonance for me because it links beautifully with my favourite Olympic story of all time: the story of USA discus thrower Al Oerter at Tokyo in 1964. Despite having won gold medals at Melbourne and Rome he was not considered a favourite to win a third gold medal, as Ludvik Danek from Czechoslovakia held the world record and had won an incredible 45 consecutive competitions. In addition Oerter was forced to wear a neck brace because of what was described as a “chronic cervical disk injury.”

However about a week before the start of the Olympics, Oerter slipped and fell while practicing on a wet field. He tore a huge section of cartilage in his rib cage. As he recounted to Bud Greenspan in 100 Greatest Moments in Olympic History, “I was bleeding internally, I couldn’t move, I couldn’t sleep and I consumed bottles of aspirin to alleviate the pain. I went through ice treatments to minimize the bleeding and the doctors ordered me not to compete. But these are the Olympics and you die before you don’t compete in the Olympics.”

Oerter competed with his rib cage heavily taped and packed with ice, and not even three shots of Novocain could dull the pain. After four rounds (each competitor gets six throws) Oerter was in third place, a remarkable enough achievement given the circumstances, but still more than seven feet short of Danek’s best throw. Despite this and the huge pain he decided to go for broke in the fifth round and have another GO!

His last throw of 61 meters was a new Olympic record and nearly half a meter better than Danek’s best toss. Oerter never saw the discus land. He was lying on the ground, doubled up in pain.

The full story of Oerter’s discus career has many other lessons for us. But the other one I always use for coaches is his almost mythical beginning: While running on his high school track (Oerter began his high school track and field career as a miler), an errant discus fell at his feet. When Oerter threw it back his toss went so far that the coach immediately talked him into competing as a discus thrower. As I often say, ‘talent is where you look for it.’

Oerter’s career blossomed at the University of Kansas under legendary track and field coach Bill Easton. Easton guided Oerter in his early career that included making his first Olympic team in 1956. 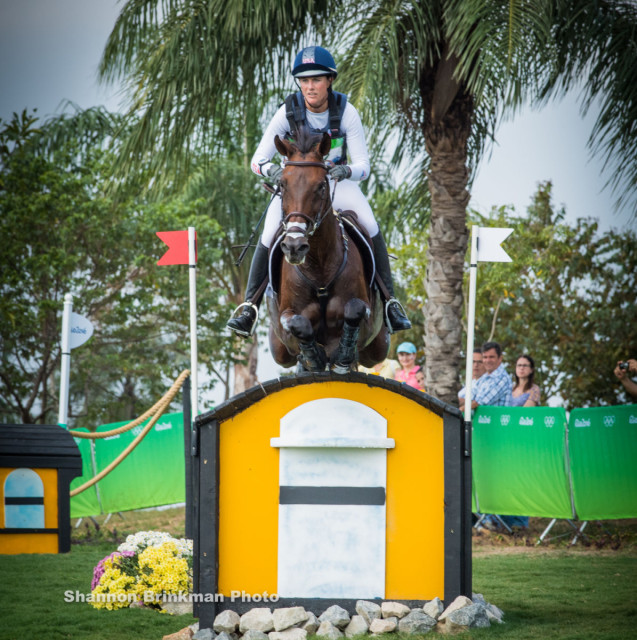 The lessons to be learnt from the USA Eventing Team performance in Rio are different but no less valuable. A team medal is rarely won by the exceptional brilliance of one team member, although it is true that in dressage Charlotte Dujardin and Valegro have done just this for Britain, but sadly in modern eventing team medals can be easily lost by falls on cross country when all team members have to complete.

Lauren Kieffer and David O’Connor will have to live with their decisions on the day, and there is no doubt that these type of decisions are never 100 percent black and white. The question they must both ask themselves is this, given the same situation again would they make the same decisions?

Lauren in effect answered this question herself when saying, “My job was to get a clean round, first and foremost, and it’s pretty disappointing to let the team down.” However Lauren is a huge talent and her ‘fire and flair’ across country is what makes her special and an almost certainty to be a USA team member for years ahead because of this ability. In addition everything about her says she is a wonderful student of the sport so I have little doubt that next time she will play the percentage game.

Certainly, if the assumption is that Lauren and Veronica would have completed the rest of the course without a fall, then a team medal was lost and this will remain a huge blow both to David and USA eventing. But his response is very encouraging for the USA team. “I’ll take the responsibility,” said David. “If everyone feels like she should have taken a conservative route and I should have told her not to do it, I’ll take that.”

David probably did make a mistake but he is not blinkered or dogmatic. Therefore the positive take on Rio is that without doubt David both brought the USA tantalizingly close to a medal and will learn from the Rio experience as he has another GO!