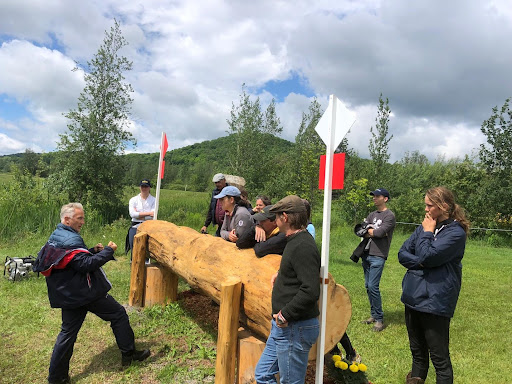 The riders, grooms, and volunteers were in for a treat earlier this month at the MARS Bromont Three-Day Event: Rodolphe Scherer, the current cross country coach for the German team, was in attendance as a mentor for the Bromont Rising program, hosting three course walks during the week for the 2*L, 3*L, and 4*L divisions which were open to anyone who wanted to join. His insights were invaluable and his humor was contagious.

This line stayed in my head for the rest of the week. To me, it meant be brave, but sit as though something bad might happen. I found it very useful to remember as I rode around the courses. 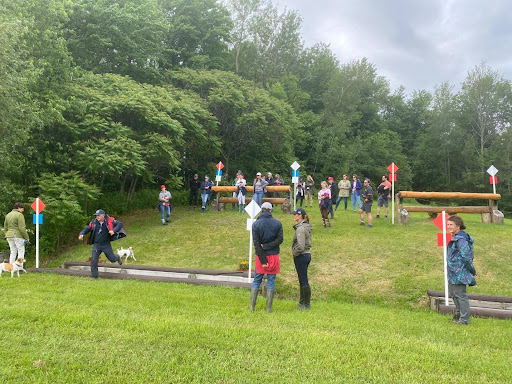 Here are a few memorable quotes from his course walks:

“All the time you have to think: two reins, two legs.”

“Pay attention to the spirit of the horse—that is more important than your stopwatch.”

“Your feeling is what’s most important.”

“The distance that we walk, that’s the distance on paper— in real life it may be different for your horse.”

“Keeping your line is the most important thing.”

“Many problems on cross country are because of the rider losing their position.”

“At the coffin, you need to take the toilet seat.”

“Think of a ditch and wall as a big vertical with a nice ground line. It is more to frighten the rider than the horse.”

“The cross country course is like your enemy. But you cannot beat your enemy if you don’t respect it.”

“The smoother you ride, the more petrol in the tank you will have at the end of the course. It is not that Michael Jung has fitter horses than everyone else—it is that he uses the least amount of petrol per jump so his horses are fresh at the end.”

“When there are cross country jumps in an arena [on all-weather footing], often the horse will speed up because the footing is faster, so be aware of that and keep the tempo you want.”

“Many people slow down to try to see their distance- you have to continue with the canter and let the distance appear in front of you.”

Thanks to Rodolphe for his time and expertise. We are so glad that he could come to one of North America’s best three-day events.