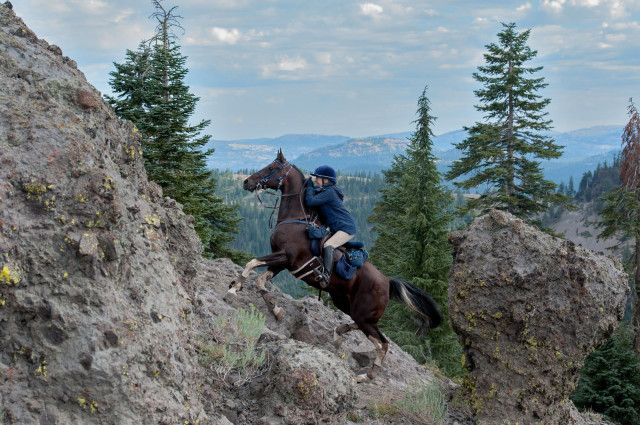 Four-star event rider Hilda Donahue began participating in endurance rides in 2014. She has since made her way through the FEI rankings and is currently ranked first on the Open Combination World Endurance Ranking with Cheryl Van Deusen’s half-Arabian mare Spotless Summer Magic. When we interviewed Hilda back in April, she told us her ultimate goal is to qualify to represent Ireland in the endurance competition at the 2018 World Equestrian Games in Bromont, and for that she only needs one more qualifying ride.

Her other goal was to ride in the Tevis Cup, a grueling 100-mile ride along the Western States Trail in California considered to be the most difficult endurance ride in the world. This month Hilda accomplished her goal of riding at Tevis and though she did not complete the ride, she got what she came for – an experience of a lifetime.

“I feel exhilarated! Any event rider of any level, particularly the upper levels, who could find a way to do this ride should. I almost wish I had been introduced to endurance riding 25 years ago. It is hard to articulate the type of skill it gives you. I appreciate the horses even more than I ever did,” Hilda said.

Tuff Stuff, an Arabian/Paint/Standardbred gelding owned by Hilda’s sister in law Karen Dutcher, was Hilda’s Tevis mount. Tuff Stuff is an experienced endurance horse; he completed Tevis in 2007 with Hilda’s husband. What is surprising and exceedingly impressive about Tuff Stuff, however, is his age – he is 20 years old this year.

“At first when my sister in law offered me Tuff Stuff, I wanted to decline. But as I did my research I did discovered if sound and properly conditioned, it is not unusual for a 20-year-old to complete Tevis.” In fact, Tuff Stuff was not the oldest horse in the field this year. Hilda attributes this incredible fact to the resiliency of the Arabian breed and says she came away from the Tevis experience with “an amazing respect for the Tevis Cup horses.” 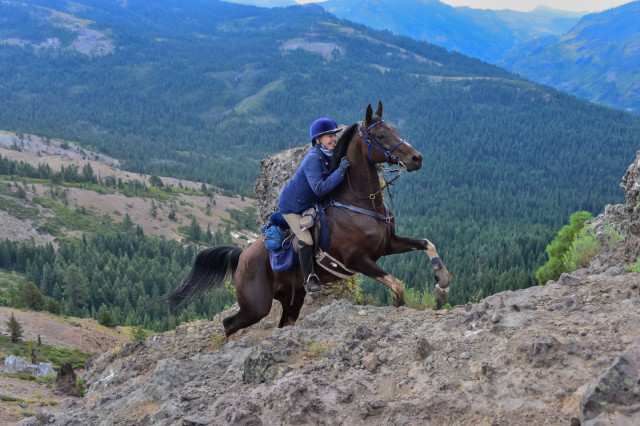 Hilda rode for 16 hours on the Tevis trail before stopping, and I asked her how she manages that many consecutive hours in the saddle. She compared it to riding a cross country course; if you think about an entire course as one task and all the skills required to complete the course, it can be overwhelming, but if you break a course into sections, it seems far more manageable.

“People laughed when I came into the first official vet check after 36 miles. I came in and they’re like ‘how was it?’ And I said he felt great – it was a great warm-up!”

After that “warm-up” came a difficult track through three rocky canyons which included a famous Tevis landmark called Cougar Rock. “I was intimidated hearing about Cougar Rock, but Tuff Stuff was amazing. He glided up Cougar Rock,” Hilda said.

“I was instructed to follow the arrows. They have made it easy for you on Cougar Rock because there is a certain way to go up, so you follow the arrows they paint on the rock. Heaven forbid you don’t follow the arrows! I was told to look down, but there was no way. I had the arrows in my peripheral vision, loosened the rein so the horse could use his body, guided him with my legs and he did the rest.”

As frightening as it may have seemed, Cougar Rock is just one of the stunning scenes Tevis Cup riders experience during their long journey. “I’m from Ireland where we get beautiful scenery,” Hilda said. “I have seen nothing like this. It was exquisite. Words cannot describe the beauty. The scenery alone is an experience.” 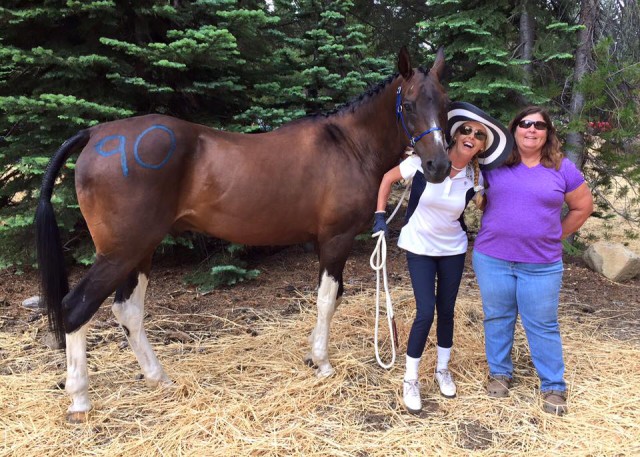 Hilda and Tuff Stuff won Best Presentation at the Tevis pre-ride vet check. She says she’s the only one to braid and use Show Sheen and hoof polish. Photo courtesy of Hilda Donahue.

Hilda and Tuff Stuff rode 68 miles before she decided to retire from the competition. After traversing some of the most difficult terrain in the endurance world, and Hilda felt that Tuff Stuff was showing signs of fatigue as they approached the Forest Hill vet check.

The elevation changes at Tevis are part of what make the ride so difficult. Over the entire 100 miles, horses and riders climb 19,000 feet and descend 21,000 feet. Much of that elevation change occurs during a section where you ride through canyons with difficult, rocky rooting. It takes a lot of concentration and determination to get to the other side.

Hilda ended up dismounting and walking Tuff Stuff up the last of three canyons. As a result, they got into the vet check at Forest Hill six minutes late. Usually, this results in immediate disqualification. However, Tuff Stuff’s vital signs were in such good shape, the veterinarians were happy for him to continue.

“In retrospect, I probably could have gone on, but I’ve always been the rider to slow down on cross country and take the long route. It’s one of my faults, and it’s a good fault. I always put the horse first – it’s in my nature.”

Later that evening, Tuff Stuff was happily cantering around his paddock with sound, clean legs. He was eating and drinking well and nickered at Hilda when she came to check on him early the next morning. At that moment, in her heart, she knew she had done the right thing. 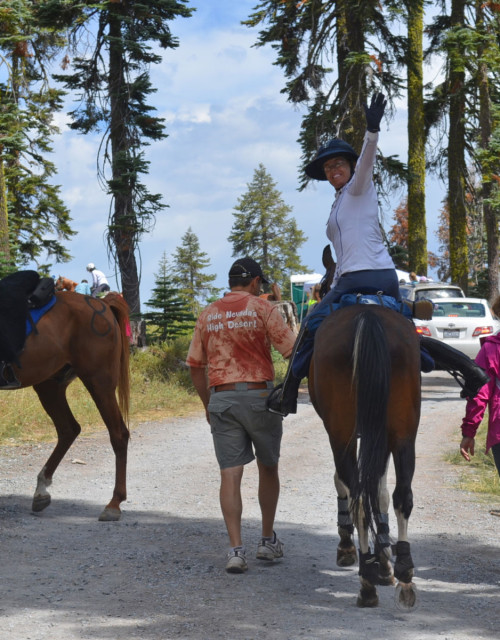 Hilda had a brilliant support team helping her throughout the long ride including Tuff Stuff’s owners Scott, Karon and Dustin Dutcher, as well as Bob, Sharon and Alex Finston, Jeff and Carolyn McKenzie, Beth Kauffmann, Desiree Lammer, and Hilda’s husband Ken McKenzie. They were not only there for moral support and mentorship but assistance at the checks as well.

“With the long format (eventing), if you were smart and had enough people, you had at least one person at the start of steeplechase, one or two at the end and ideally six people in the vet box. Sometimes they were all the same people. Think of that scenario and ten times worse that that!”

Getting to the “crewing” stops to wait for your rider is a journey in and of itself. The first crewing station was an hour-and-a-half drive up a dirt road. They had to get water from the river and carry it back. They repeat the process at each stop over the course of 24 hours, and they must wait patiently for their rider without any means of communicating with them. When Hilda arrived at the stops, the crew rushed in to take care of the Tuff Stuff and Hilda was instructed to “sit down and eat something.”

“It was amazing to watch them. They know the drill in terms of getting a horse comfortable and hydrated. They’ve been doing it as a family since 1966 – four generations of Tevis Cup riders.”

Look back at each photo in this article and you’ll notice something they all have in common: Hilda’s smile. Those who know Hilda are unaccustomed to seeing her without a smile on her face, and it is safe to say she was likely grinning throughout her entire ride at Tevis. When asked if she’d like to try the ride again, she said she’d like to finish, but she doesn’t feel like she’s failed by not finishing.

“Thank you to my loyal and supportive sponsors Voltaire Design, Tredstep Ireland and Thinline. Special thanks to Tuff Stuff.”

Read more about the Tevis Cup, including the 72-year-old winner named Potato and his homebred mare SMR Filouette, over on our sister site, Horse Nation. Continued luck to Hilda on her quest to qualify for WEG!