During the EN redesign, one of the first decisions made was to once again incorporate the famous Rolex crowd shot into the header on the site. The photo captures EN’s nation spirit, and the team agreed it needed to be prominently displayed, just like it always has. Have you ever wondered where the photo came from? Holly Covey, who snapped the photo at Rolex in 2009, tells the tale. 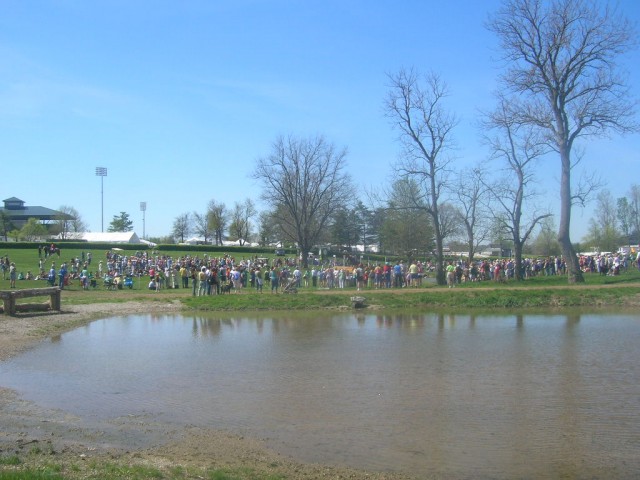 While I was living in Southern California in the early 1980s, we who were under the wing of eventing evangelist Brian Sabo were busy helping with the Olympic Games run-up. This included a lot of pre-event things, from helping Neil Ayer at the cross-country course/golf course site down in Rancho Sante Fe, to writing pre-Olympic event coverage for Horse & Hound and even Bilt, a German magazine. I described, based on interviews with Mr. Ayer, all of the cross-country obstacles, wrote it up, and it was used by the official Olympic program printers.

Finally, the Games began in the summer of 1984, a hot Los Angeles summer, and I volunteered for 10 days of the entire equestrian competition at Santa Anita. I saw the famous Dr. Klimke victory pass from the back gate. I met His Royal Highness Prince Phillip, who at the time was head of the FEI and responsible for the final scoring, and as I was tasked as a gofer for the publicity department, had to climb the stands to his box above the competition arena to obtain official score sheets. I was down in the warmup finding riders for interviews and brought medalists up to the PR offices for media conferences. (The British eventing team ladies used my makeup to try and get sweat off their faces for photographers.) I was in the stable area. I was next to famous coaches, riders and trainers. I met horsemen from all over the world.

After the Games, we were all very excited to continue these great friendships, and one of these was with Mrs. Diane Marra, a strong USET eventing squad supporter who owned the great Better & Better, ridden by Mike Plumb, as well as Southern Comfort, ridden by Torrance Watkins. She invited me to visit her on the East Coast the following year, and I was lucky enough to be her guest for Radnor Three-Day Event. While there, I ended up writing reports for a couple of equestrian magazines, one of which asked me to cover the Kentucky Three-Day Event the following spring.

By this time, 1986, I had returned to my parent’s home in the Pacific Northwest to train my own event horses and finish another college degree, but found the money to make the trip to Lexington in April. It was a delightful trip. This was when the stabling was portables on the blacktop, the stadium was on grass, and I don’t remember the cross-country very much. I do recall the Sunday jog had the exact same focus and intense feel that today’s jog does, though! I took a lot of photos, wrote several articles, had a great time and met even more eventing friends. But as life often does, I never got back to Rolex.

Fast forward 23 years. For some reason, I decided I’d go back in 2009, this time just as a spectator and not working press, but take photos and enjoy the competition. I’d been a member of the Chronicle of the Horse forums for a while and had picked up new eventing friends, and it sounded like a great adventure. And it truly was for me; nearly every footstep I took on the grounds brought back old memories. Many things had completely changed; I couldn’t tell you where the old stadium field was; Mrs. Marra had passed away; the riders I knew back then were also retired or out of the upper levels. But I found new friends.

The most astonishing change for me was the absolutely HUGE amount of people out on the cross-country course. It was crammed with people from every stringed-off lane to stringed-off lane. Let me tell you, 23 years ago, you did not have to hurry to see anything, and there wasn’t more than two or three people deep at any viewing spot! Wow, things had changed. For one, I learned to wear comfortable shoes on cross-country day, because if you want to see a lot of jumps negotiated, you have to hike a bit.

I tried to have a plan, but the crowds being so large, much of my planned photo route had to be changed. I found myself still in the front half of the course about halfway through the day, so started to hike back through the middle of the course to jumps I had missed. I stopped, though, stood back behind the Hollow, looking south, and could barely fit the long string of spectators in the frame of the camera — it was simply amazing to me that so many people could love my sport of eventing.

I took the famous picture just as one of the German riders that year successfully negotiated the coffin, and the light seemed just right at about that time of day to get really good photos of the beautiful rolling hills of central Kentucky. I saved that photo on the memory card because it just seemed so perfect — people, a great jump, an international competitor, beautiful obstacles, great course and competition, famous hills; it had it all. It promised the sport of eventing to me. I like to take pictures that tell stories. This one did that, I think.

When John asked some friends who were enthusiastic about the early online production of Eventing Nation for a photo to help with graphics of the site, I sent him the magic photo and was both pleased and a bit proud to see it in the header a few weeks later. It has stayed there ever since, a perfect symbol of my sport to the world. I enjoy looking at it because it helps me to keep my confidence up. I’ve been through a lot personally since that moment on course in 2009, but that photo stays with me to remind me eventing is still my sport, and it’s still waiting for me to return to it; and I’m coming — I’ll be back soon, eventing. I promise. 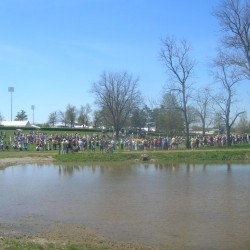 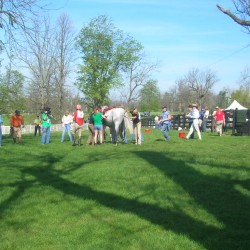 Bruce Davidson and Cruise Lion in the vet box. Photo by Holly Covey. 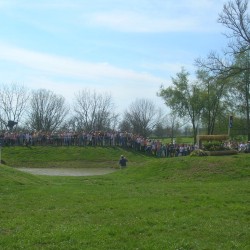 The crowd for Jimmy Wofford’s course walk at Rolex 2009. Photo by Holly Covey. 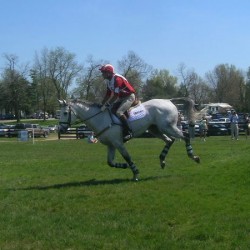 Bruce Davidson and Cruise Lion at Rolex in 2009. Photo by Holly Covey. 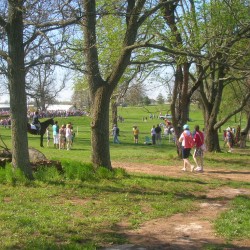 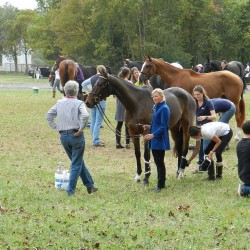 Jan Byyny and Inmidair at the Wednesday jog at Fair Hill 2013. “It is a picture that ‘tells a story,’ I think, and I love how they seem to glow — sort of a prophetic picture, as they ended up winning!”

Holly also sent in more photos from Rolex in 2009 and one photo from Fair Hill last year.