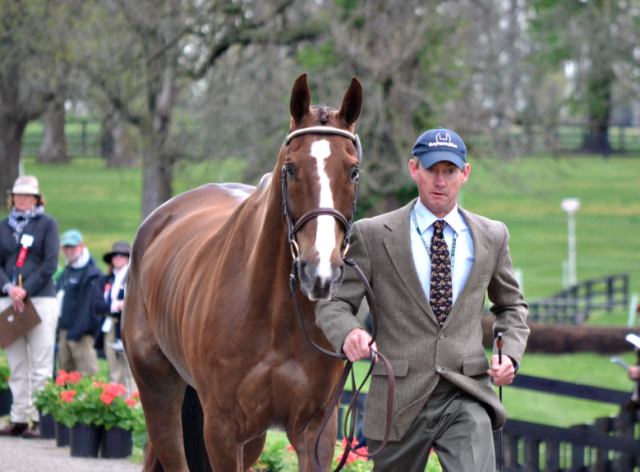 It’s been awhile since we last caught up with fan favorite Peter Atkins. After taking home 10th-place honors at Rolex last year, Henry Jota Hampton enjoyed a quiet fall, spending most of his time finessing his dressage with James Koford. With the World Equestrian Games rapidly approaching, Peter’s attention has now turned to working on the selection process for the Australian team.

“The Australians are not considering Rolex a selection event (for WEG),” Peter said. “They want the Australians to compete head to head, so they have recommended either Badminton or Luhmuhlen for 2014.” In 2012, Peter suffered a broken leg before flying over to the UK to contest Badminton, and Peter hopes that such bad luck will not befall him with this impending trip overseas. “Hopefully a horse won’t fall over and break my leg this time,” he joked.

Peter alluded to the fact that during his time competing in Australia, he found that there were no Open divisions to compete in. This meant that if a rider acquired an Advanced horse or had a horse coming out of the off-season, there were no other options other than to run Advanced the first time out. He remarked that he prefers the structure of the divisions in the U.S., which allow him to choose a level based on the horse’s fitness and current ability rather than having to come out guns blazing at the top level immediately. Peter plans to run Henny at Rocking Horse at Intermediate and Advanced before tackling Red Hills.

What about Henny’s opinions on coming off of a break? “He does really well with breaks. His dressage is really coming along, and he is jumping great. At the moment, I’m really happy with where he’s at,” Peter said. “He’s pretty consistent. I did run him Advanced first last year at Rocking Horse, and he was a little wild on cross country because he was excited to be back. So this year I decided to run an Intermediate beforehand.” As the new season progresses, Peter’s plan is to prepare to head overseas to have another crack at Badminton per the Australian selectors’ advice.

While based in Florida for the winter, Peter has a couple of young horses that he is working with, as well as a new Advanced horse. Lambrusco is an Oldenburg gelding that is coming off of a three-year break from competing. Peter ran him in the Preliminary division at the Ocala Horse Properties Horse Trials earlier this month, where he finished second in a strong field of 18. Lambrusco earned an impressive 27.4 to win the dressage that weekend, and Peter has high hopes for him going into 2014. “I still have to teach him my way of going, but I have pretty high hopes for him,” Peter said. “So far coming back from his break he is going very well.”

Peter also has undertaken the training on a promising new stallion, Clair de Lune. Owned by Rose Sullivan, the Holsteiner stallion was the West Coast Young Event Horse Champion in 2009 and most recently campaigned with Marilyn Little in 2012. Clair de Lune has produced many successful offspring, with many scoring between 85% and 89.98% in Future Event Horse competitions in 2013. Clair de Lune is preparing for a busy competition and breeding season in 2014. For the first time, both fresh/cooled semen and frozen semen will be available for interested parties. For more information on this exciting stallion, contact Peter.

While I’m sure that Peter and Henny’s U.S. fan base will be sorely disappointed that they will not be hearing that boisterous “Good boy Henny!” from Peter as the pair storms around Rolex, take solace in the fact that Peter plans to arm himself with his trusty helmet cam for his runs leading up to Badminton this year.

Always willing to expand his horizons, Peter has also had a bit of fun while spending some time in Florida. Check out this video that shows just one more use for event horses: mounted shooting! This is a horse in training with Peter, Tom Boy, who decided to take a crack at perhaps the loudest equine sport.