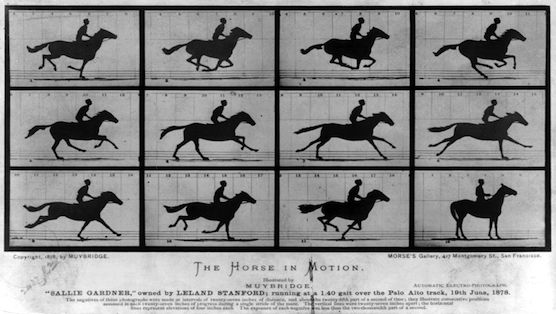 The Horse in Motion, by Eadweard Muybridge.

In 1878, Eadweard Muybridge famously created a series of photographs called “The Horse In Motion,” settling a debate about the placement of the legs during galloping. While many theorized that the horse always had at least one hoof on the ground, California governor Leland Stanford, a businessman and racehorse owner believed in the idea of “unsupported transit” during the gaits and hired the artist Muybridge to help him prove it.

In order to capture the sequence of a gallop, Muybridge placed many glass-plate cameras alongside a racetrack, and each one was triggered by a thread that the horse hit as it ran by. These frames proved that at one point, all four hooves were indeed off the ground. However, most artists at the time portrayed that moment with the legs extended on either end and, in fact, Muybridge’s photos showed that it happened with all the legs tucked underneath.

Fast forward to modern times, and designer Evan Hawkins has been inspired to bring “The Horse In Motion” back to life. He and ten of his friends tattooed one of the frames onto each of their arms, and turned it into a GIF animation. Hawkins plans to expand his project to 1,000 people around the world for larger stories and animations through single frame tattoos. Check out the full project HERE!