This post originally appeared over on our sister site Horse Nation, which posts awesome things like this all the time. If you’re not reading it every day, please ask what you’re doing with your life and then remedy your actions accordingly. 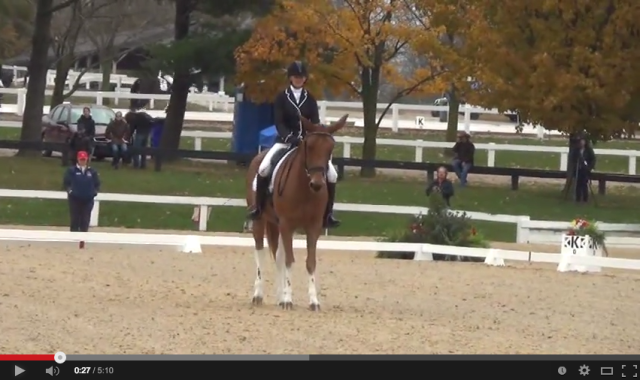 You may remember last weekend’s piece about Laura Hermanson and Heart B Dyna, a dressage mule who achieved scores to make her one of the nation’s top equines at Training level, and in doing so, opened up the door to mules competing at the U.S. Dressage Finals. But Laura and Dyna weren’t the only unorthodox success story this weekend at the U.S. Dressage Finals in Lexington.

Most adult amateurs are no stranger to working a day job and pursuing their horsey dreams by night — but not many reach national competition. Lexington local Cariann Wlosinski is a middle school teacher who “teaches by day and rides by night,” and scored 70.567% this weekend with her homebred Oldenburg mare Rhiannon to win the Second Level Amateur Freestyle class this weekend.

North Forks Cardi, the Welsh Cob stallion who won the Open Grand Prix Freestyle, stands at just 14.3 1/2 hands … but you wouldn’t know it from the power and fluidity of his movement.

“Freestyle is where he really shines — he hears that music and he becomes a big horse. Nobody told him that he’s only 14.3 hands!” said owner/rider Jessica Wisdom. “All he has to do is go out there and be the rock star that he knows he is. And you saw what happens! He has an ego the size of Texas. He seemingly becomes three hands taller and says, ‘watch this.'”

And We Know You’re Wondering About Dyna the Wonder Mule

“I hope to come back next year!” said Laura when we spoke to her before she left for Kentucky. She has two other dressage mules she is currently competing, one at first level and the other at third level.

Nothing against your typical dressage warmblood — making it to the US Dressage Finals is no easy feat whether you’re on an Oldenburg or a mule. But there’s something so special about when an unexpected breed or an unlikely rider works hard and fights their way to the top. How can you not love them?