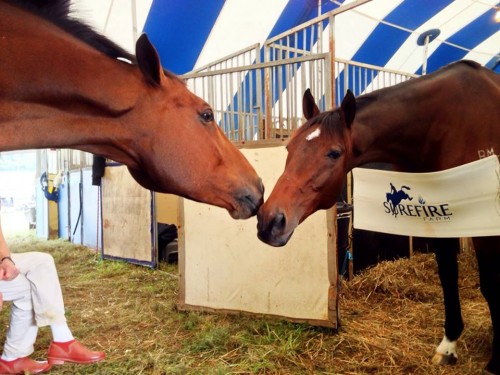 When it comes to hoping an older horse will lend some wisdom to a younger one, I’ll confess that my dreams have often lingered on this idea. How amazing would it be to have the ability to turn your old schoolmaster out with your young prospect and expedite the process of creating your next superstar? I’ve always vaguely wondered if stabling a tidy horse next to the windmill pooper will have any effect, or if turning the wild child out in a field with the prim grandmother will settle the former.

While those specific wishes might be a little hard to ensure, some new studies conducted in Germany indicate that equine intelligence may have been underestimated up to this point. Led by Professor Konstanze Krüger at the University of Nürtingen, a series of experiments seem to prove that it might actually be possible for an older horse to teach a new horse certain aspects of life.

Social learning, in general, has always been viewed as a sign of higher intelligence, reserved for humans and other animals considered to have near-human intellectual capabilities. As a result of this, horses have always been put low on the intelligence scale, something that equestrians world-wide know is absolutely untrue. However, Krüger’s new study indicates that perhaps the tasks presented were flawed, and not the ability of the horses’ to learn.

The study was simple: have one horse open a feed box while another horse watches, and then test the second horse’s ability to learn the system to get to the food. The box was opened by pulling a rope that opened a drawer, and horses of all ages and dominance ranks were chosen for the experiment.

As it turns out, horses that were younger and lower in rank than the demonstrating horse were more likely to learn the task, while if the roles were reversed, the learning curve almost disappeared. Ten of the fourteen horses who were younger than the demonstrating horse discovered how to open the feed bin, while only two of the eleven who were older did.

Krüger suggests that the intelligence of the horse has not been measured in ways that reflect their social structure and motivations. It is inherent in the social life of a herd animal like the horse to follow the example of the older, more experienced horses while learning from younger ones does not exist. It might not be an indication of inability to learn this way, but more likely a choice made by the horse.

While horse people everywhere have always known the advantage of using an experience horse to give a lead over a jump, through some water or on a trail, scientists are just now recognizing that their initial assessment of equine intelligence may have been lesser than the reality. Now, if only I can convince the stall-twirling horse to learn from the 30-year-old pony that poops in one corner …