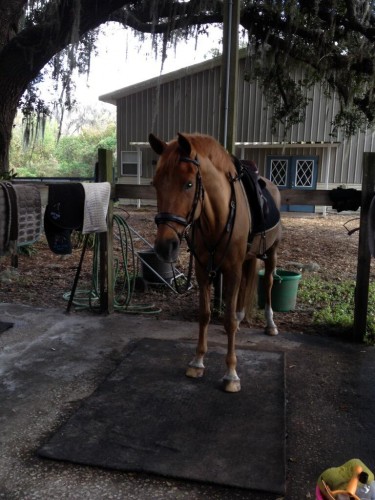 Who doesn’t love a talented eventing pony? Ever since the days of Theodore O’Connor and countless other superstar ponies, fans of the sport are quick to climb on board with a new rising star. In October, we reported that the talented pony pictured above, Forrest Nymph, was set to join the ranks of Sinead Halpin Eventing. Sinead announced via Twitter yesterday that “Farrah” would be making her way to join Team SHE this week. We can’t wait to see how this new partnership develops. Stay tuned for more updates as they come out of Team SHE.

Cavalor Feed for Thought: Joint Pain or Muscle Pain? Our wonderful sponsor, Cavalor, believes that education is the best way to promote better wellness for our horses. To aid this, Cavalor publishes many different discussions on various horse health issues. This week, they have posted a quick write up on determining whether an unsound horse is suffering from joint or muscle pain. [Cavalor Feed for Thought]

Do you think the USEA should add a new division? There was much discussion this weekend at the convention about the gap between Training and Prelim and how it is difficult for some horses and riders to make the jump. A lively discussion on the topic is also ongoing on the Chronicle of the Horse forum. While there are many Training-Prelim openings at many horse trials, what would the benefits of adding a new division in between Training and Prelim be? The Chronicle reported on this question and how it was addressed at the USEA Annual Meeting. [A New Division?]

Zara Phillips’ mount Toytown and British Olympic rider Tina Cook have been inducted into the British Horse Society’s Hall of Fame. Joining the likes of William Fox-Pitt and Nick Skelton, Tina Cook and Toytown now have their names on the BHS Hall of Fame wall outside of Hyde Park. Congratulations to the newest Hall of Fame Members. [Horse & Hound Reports New Hall of Fame Members]

The US Dressage Federation also held its Annual Meeting this past weekend. The Chronicle of the Horse has a wrap up from the weekend’s events, which include a 2013 recap by Chef d’Equipe Robert Dover and a few new officials. [The Chronicle Recaps USDF Annual Meeting]

The FEI has released a new app for mobile users to view FEI TV anywhere they go. The app is free but requires a subscription to FEI TV to stream events from your phone. However, if you are constantly on the go like I am and want to stay connected with the happenings, the subscription is well worth it. [FEI TV On the Go]

SmartPak Product of the Day:

I’m kind of a snob when it comes to choosing breeches. I like to find pairs that fit nicely without restricting movement. I have also come to prefer full seat breeches at all times, and since I don’t tend to wear jeans and half chaps to ride, I need a pair of breeches that will last for a long time. Enter the SmartPak Soft Shell Bradley Full Seat Breeches. I practically ran to the SmartPak tent at Rolex the year that this line came out, and I have not looked back since. These breeches are show quality but still comfortable and affordable enough to use for schooling at home. I can’t recommend them enough, so go and pick up a few pairs for yourself. [SmartPark Soft Shell Bradley Full Seat Breeches]

An oldie but goodie. Given that most of the East coast is currently digging its way out of the snow, I thought I’d share some true “Pony Power.”