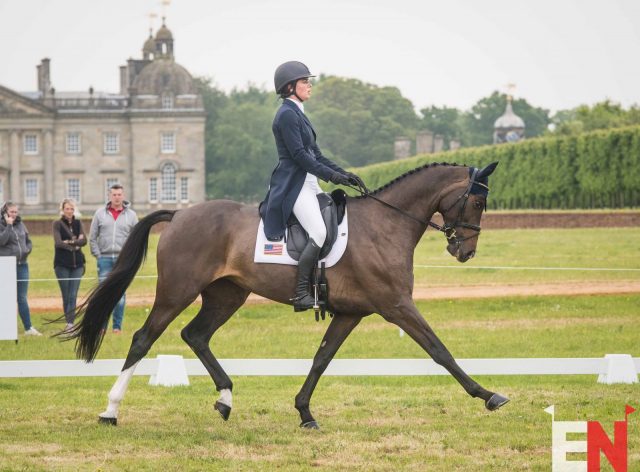 The final nineteen riders in the CICO3* at the Saracen Horse Feeds Houghton International Horse Trials performed their dressage tests this morning, with the final gaggle of team riders taking to the centreline in the last section. The combinations will go forward to the showjumping phase in about an hours’ time, but before then, let’s take a closer look at how the Nations Cup competition is playing out. 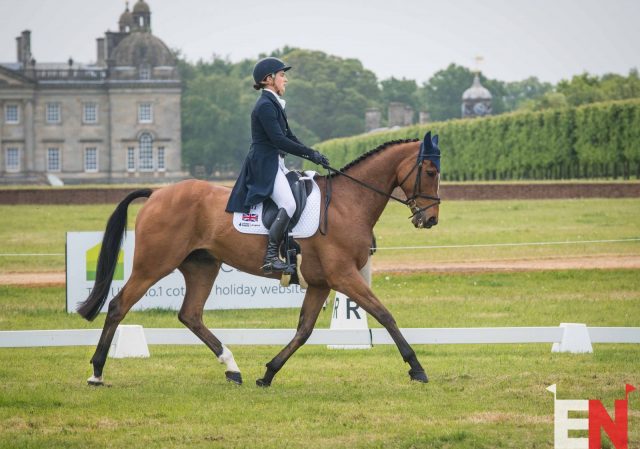 As predicted, Great Britain leads after the first phase. The discard score will be decided upon completion of the three phases – assuming all four of the team riders complete – but at this early stage, it would be today’s representatives, Chuffy Clarke and Second Supreme, whose score would be dropped. They posted a 36.7 and currently sit in 71st place.

Katie Bleloch and Bulano, currently on 30.4, have never pulled a rail in their four CIC3* runs together, while Holly Woodhead‘s Parkfield Quintessential (26.6) is slightly less consistent – he pulled two rails in last summer’s Nations Cup leg at Haras du Pin, but often jumps clear, most notably in Blenheim’s 8/9yo CIC3* last autumn. Matt Heath and One of a Kind II (31) tend to take two or nothing – if they do the former, they’ll likely shift into the discard spot, because Chuffy and Second Supreme are reliable over the poles: they’ve only pulled one rail in the their seven international runs together, in their first CCI3* at Blenheim last year. 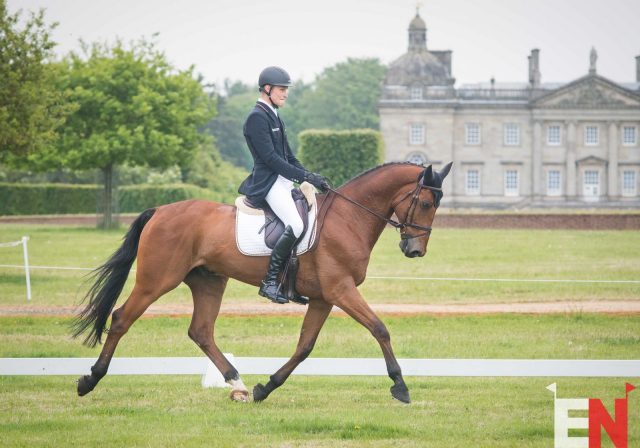 The pressure will be on for the home team, because Germany is just a hair’s width behind them on a score of 89.2.

Only one of the teams here has put any points on the Nations Cup series leaderboard so far – Sweden sits in second, with 90 points collected at the first leg at Vairano. Here, they occupy third place. If they can hold this place – or better it – they’ll take a commanding lead in the series over France. They field a three-person team this week, so there’s no margin for error in their quest. 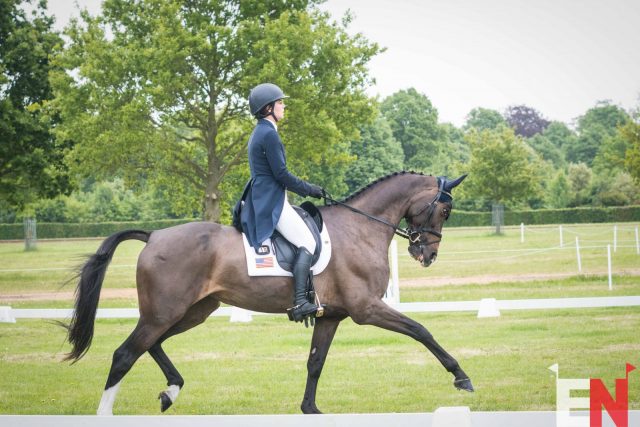 It’s always a huge help to have the buffer of a drop score, but our intrepid ladies are sallying forth without. The final team rider, Hallie Coon, was the last in the ring this morning with Celien, and their score of 34.7 puts her into equal 53rd place after the first phase. This puts the team onto a score of 103.5, which sees them slip just behind Ireland into the bottom spot at the moment – but much can, and will, change as the jumping phases commence.

“She got a bit uppity in the arena – we’ve been working a new outline with her, and it’s still a work in progress,” says Hallie of Celien’s performance. Hallie and Celien are enjoying their first trip abroad, courtesy of the Karen Stives Endowment Fund Grant. They’re based with fellow recipient Caroline Martin at Rodney Powell’s Wiltshire base. 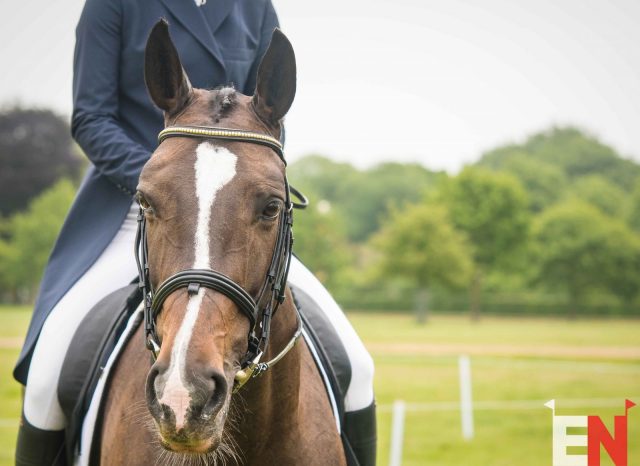 Celien: as settled as though she’d always been here. Photo by Tilly Berendt.

“It’s been amazingly easy, and Rod has been so welcoming. It really feels like we’re at home, and Celien was so settled by the first night. It’s great for us to come here before Bramham, because it’s so different to our last run at Tryon. Celien has always been a bit insecure when doing dressage on grass, because she’s a big mover.”

Hallie will contest the U25 CCI3* at Bramham in two weeks, and after that, she’ll be keeping her options open.

“Being here is such an amazing part of our education – how often do you get this sort of opportunity?” she muses.

Each of the team US combinations averages roughly a rail, give or take a fraction of a penalty, per international performance, so we’ll be looking ahead to tomorrow’s cross country phase to see the ladies really try to climb the leaderboard.

Caroline Martin’s second ride, The Apprentice, produced a personal best at the three-star level, posting a 28 this morning to move into tenth place at the conclusion of the dressage. This bests their score of last year by 6.2 points, and their Bramham score by 7 points – and without team obligations this weekend, Caroline will likely use this run as a way to build the horse’s confidence in advance of the main-goal CCI3*. The Apprentice’s last international cross country run was at Carolina International in March, where he pulled two rails and added 10 time penalties across the country, so a tactical run tomorrow could see the pair back to their fastest in two weeks’ time.

We’ll be back after the showjumping with a full report and a look ahead at tomorrow’s cross country test. 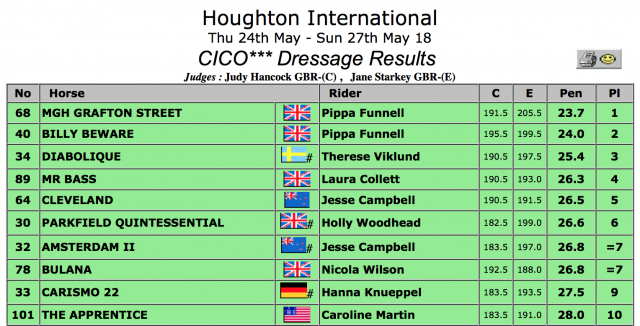 The top ten at the conclusion of the dressage.