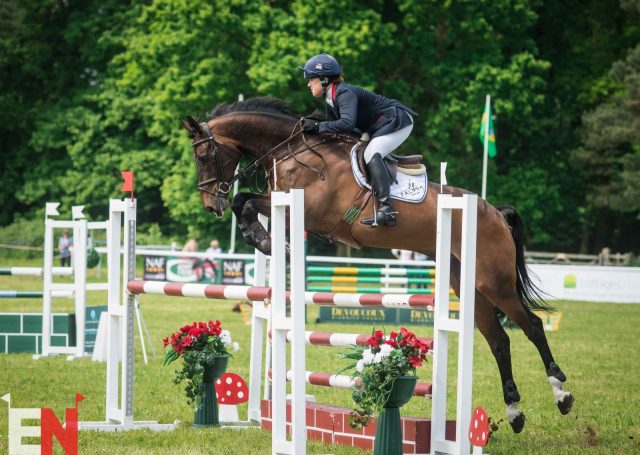 Pippa Funnell holds the lead – but shuffles her horses – going into cross country. Here, she pilots Billy Beware to a steady clear. Photo by Tilly Berendt.

The scores across the leaderboard were seriously tightly bunched at the conclusion of dressage, leaving doors wide open for outliers to besiege and claim the top spots in today’s showjumping. And besiege and claim they most certainly did – we saw minor errors cause plummeting falls in the placings, while double-clears thrust first-phase ‘also-rans’ into contention.

Pippa Funnell led with MGH Grafton Street after dressage, but pulled a rail – a common issue for the ten-year-old gelding – to slip into sixth on an overnight score of 27.7. It was her runner-up after dressage, Billy Beware, who was to deliver the goods around Sue Peasley’s sweeping course. He added two time penalties, but his dressage score of 24 gave him a safe enough buffer to hold the lead. Tomorrow, however, he will have no buffers – he sits less than a time penalty ahead of second-placed Laura Collett, who rides Mr Bass (26.3) in his prep run before his CCI4* debut at Luhmuehlen next month. Just behind her, on a 26.6, is fellow Brit Holly Woodhead, riding Parkfield Quintessential. 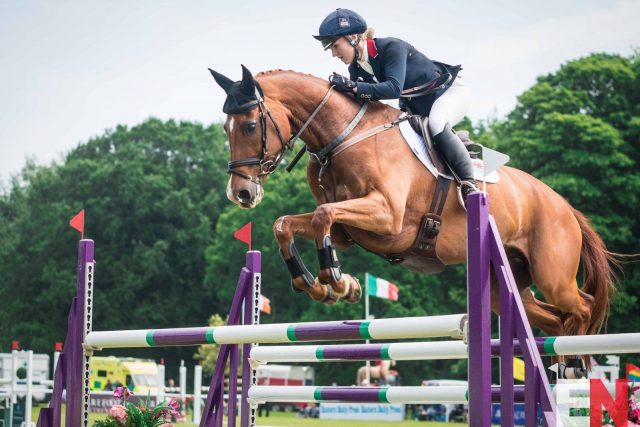 Holly Woodhead and Parkfield Quintessential sit in third place – and best of the Nations Cup representatives – after showjumping. Photo by Tilly Berendt.

New Zealand team member Jesse Campbell, riding Amsterdam, moved up into fourth place, followed by Germany’s Hanna Knueppel and Carismo 22. Sweden’s Therese Viklund previously had just one horse in the top ten – team ride Diabolique, who moved from third to tenth after pulling a rail – but added a second in Viscera, who climbed from 13th to seventh. 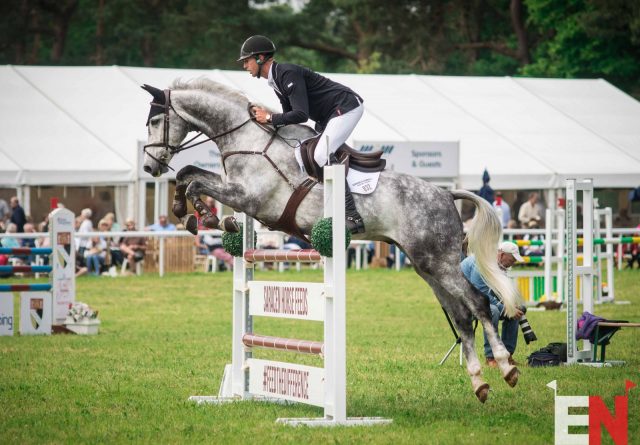 Both Izzy Taylor and Frankie Reid-Warrilow moved from the lower half of the top twenty into the top ten after delivering the goods in the ring, making our top ten a – you guessed it – girlpower leaderboard. (Sorry, Jesse. Consider yourself the Jay-Z to this sprawling, slightly grubby Destiny’s Child.) 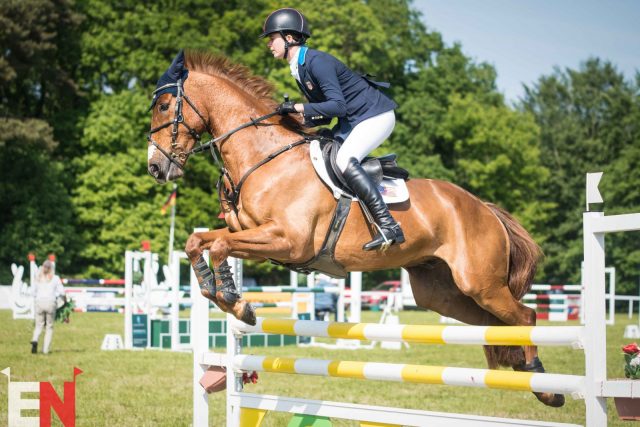 SO FRESH AND SO CLEAN, CLEAN

Though each of their horses are reasonably likely to pull a pole at this level, the three members of the US team produced classy clear rounds to move them up the Nations Cup standings. They currently sit in fifth place, above New Zealand. 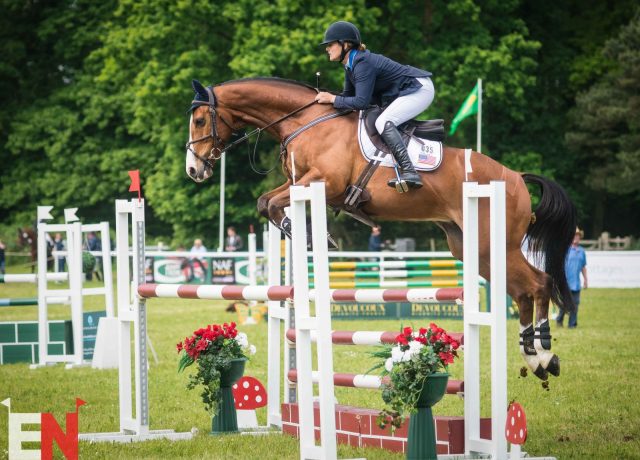 Monte Classico impresses over the coloured poles in his three-star – and Team USA – debut with Katherine Coleman. Photo by Tilly Berendt. 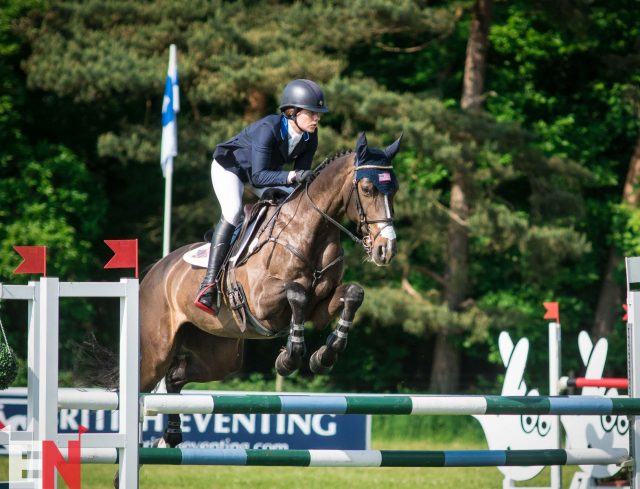 Hallie Coon and Celien impress in the second phase. Photo by Tilly Berendt.

It was Hallie Coon and Celien who produced the standout round of the day for the US contingent – they’ve only had two clear showjumping rounds in their international career, but made it a hat trick today as they made light work of the course. Celien, who is KWPN and was sourced in Belgium, may not be a blood horse, but the light, classically-built mare suits adjustability tests and looked fluid throughout. The pair moved up fifteen places from 54th to 39th. 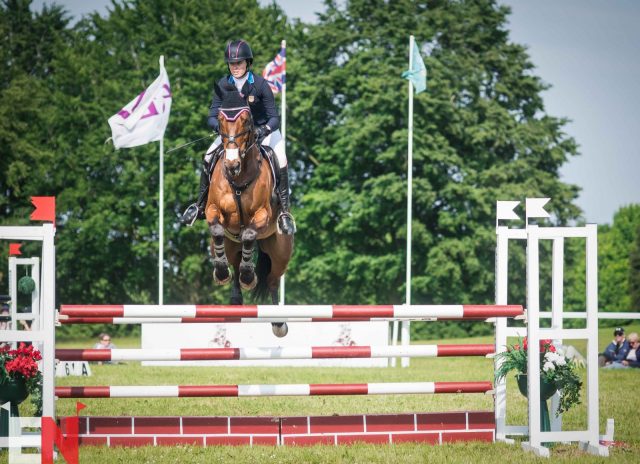 Caroline Martin and The Apprentice – 28th after an expensive five penalties. Photo by Tilly Berendt.

53% of combinations recorded penalties over the poles today. Finland’s Pauliina Swindells and Ferro S dropped the furthest down the leaderboard, totting up 15 penalties to fall from 11th place to 81st. But riders didn’t have to add much to drop – Nicola Wilson and Bulana fell 34 places from 7th to 41st after knocking two rails, and Jesse Campbell and Cleveland did the same to drop from 5th to 37th. Just one pole and a single time penalty was enough to push Caroline Martin and The Apprentice from 10th place to 28th. The opposite happened to Katherine Coleman on her second horse, Billy Bandit – they climbed eleven places, from 100th to 88th, despite an unfortunate rail. 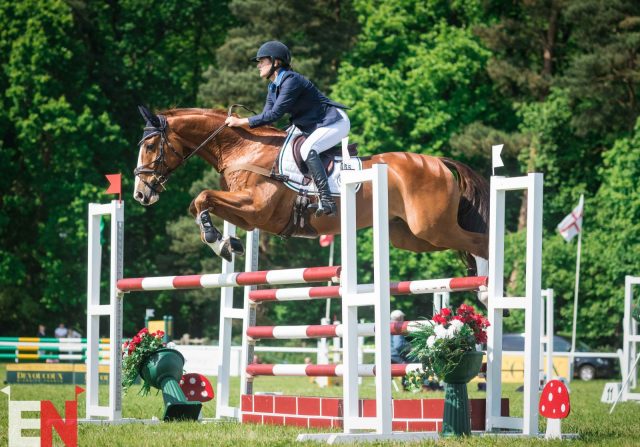 It wasn’t all bad news – in many cases, quick clears saw combinations rise exponentially, and only seven of the pairs currently sitting in the top twenty were there after the dressage.

The afternoon’s competition didn’t quite get off to a flying start. France’s Tom Carlile and Opium de Boisy were one of the early combinations in the ring, but as the horse landed from the first fence, Tom felt that something was wrong and pulled him up. The horse ambulance arrived swiftly to relocate Opium de Boisy for a full checkover, and Tom has confirmed to EN that the horse sustained “quite a serious tendon injury – but he is full of attitude, and I am sure he will recover well.” All of us at EN wish Opium de Boisy a quick and straightforward recuperation. 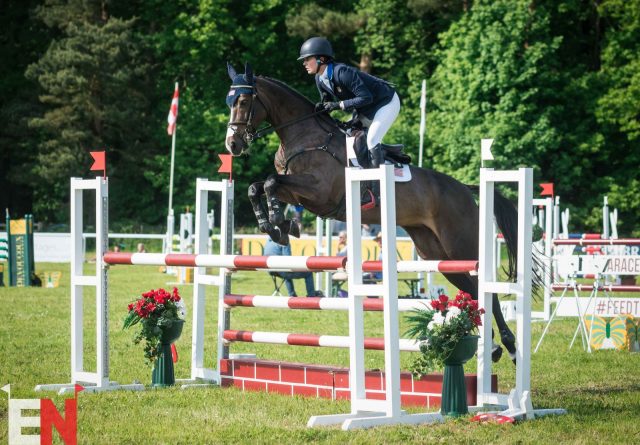 Alex Lochore’s cross-country track has been described by a few riders as trappy, but rather than trying to catch combinations out, it will instead test commitment and a studied approach. There are a few notable examples of this: the combination at 13AB and 14 features an A element on top of a mound, dropping down over some variable terrain, over a left-handed skinny brush, and then onto the separately numbered right-handed skinny brush at 14. With its ups, downs, and flat areas, striding will be variable throughout, and a good shot at A will be crucial. The inviting, wide boxy profile is bisected by a line, luring riders into jumping it straight on, but a slight left-to-right angle, ducking slightly to squeeze into the low-hanging branches, will not only avoid much of the variable terrain on the approach, but will get horses and riders locked onto the line in the air.

The upright rails and brushes at 16ABC ask a similar question, though one less heavily influenced by terrain. The A element encourages riders to turn in too early, presenting a seriously straightforward shot if they do, but on landing, they’ll struggle even to find B and C. Instead, if they hold their nerve and canter a stride or two past the obvious turning point, they’ll be able to line up all three and punch their way through. Again, not trappy – just a question of accurate and educated coursewalking, and trusting in the plan you’ve made.

18 and 19AB has been modified slightly since last year, when very few rode it correctly and several had falls. The enormous table in front of the water tower remains, followed by a sharp left-hand turn to 19AB, but this year, they’re inviting brush arrowheads, rather than the open timber corners of 2017. This will likely still be influential, but in the form of glance-offs, rather than falls.

The final combination on course is at 21ABC, and features three logs on a gently curving line. The catch: they’re situated in different parts of a seriously, seriously steep quarry. Horses will land on a sharp downhill trajectory over the first element and either pick or bound their way down to the B element on the bottom, before having to ensure a big, active, punchy canter up the hill to C. The hills themselves are outfitted with stone to avoid slippery, muddy tracks, but the bottom of the quarry is au natural, which creates another question in and of itself.

The optimum time is 6:57, requiring a speed of 570mpm over a distance of 3955m. You can view pictures of the course here. 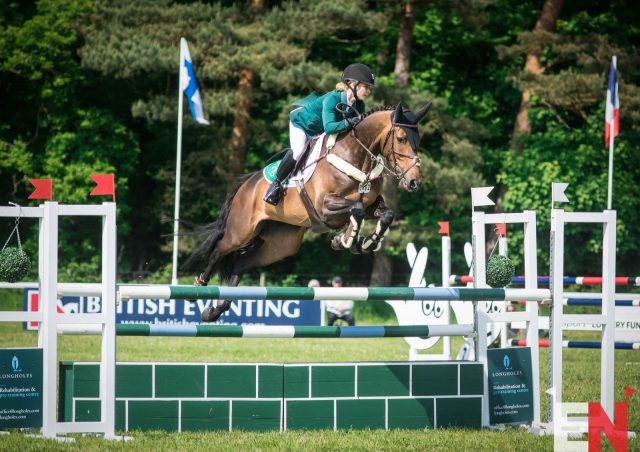 We’ll be back tomorrow with everything you need to know from the final day of competition – stay tuned! 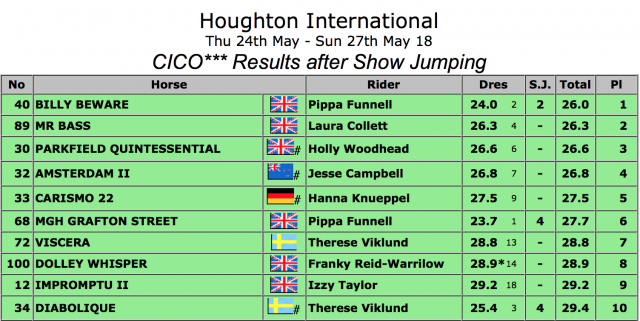 The top ten at Houghton heading into tomorrow’s cross country.