You'll want to grab a tissue before reading this one. Amy Mulhern-Sierant, a three-star level event rider from New Jersey, tells the story of Jet Set Guy, an OTTB she patiently produced through the levels only to have him suffer a catastrophic injury at his first Intermediate event. Amy writes, "Over the years I have read all the stories on EN and have been amazed by the support in our community. I wanted to share our story and hope that maybe it can help someone else get through a similar situation." Thank you, Amy, for sharing your story. 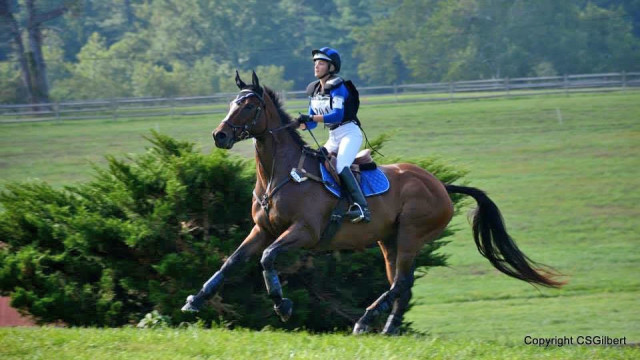 Every horse seems to have a story behind where they came from. Jet has a saga. My mom Kim and I run a business out of northern New Jersey based around taking OTTBs directly from the track and turning them into suitable partners in whatever profession they seem best fit.

Jet came to us as a giraffe-like creature at 4 years old from a track in Pennsylvania. From the first time I saw him, I could tell just from the look in his eye, he was going to be trouble. Consequently, that same look that meant trouble, usually meant one tough cross country horse! I hedged my bets and figured well if it doesn’t work out, I can always sell.

It ended up being that I was right on both ends; he was trouble but well worth it. The next five years would prove to be exactly what I suspected, resulting in trips to the top farrier an hour away for his feet that proved to be a just as high maintenance as his personality; monthly appointments for acupuncture; and multiple trips to our vet Greg Staller, who repeatedly worked miracles to hold him together.

Needless to say, nothing about Jet through the years was low maintenance. By taking a page out of Eventing 101, I did manage to master the art of living off of Cup of Noodles and working with boots that had holes in them for long periods of time so my man could have what he needed.

After four years of not having an upper-level mount, I was so pumped to be able to run him Intermediate. I had visions of me hanging on tight while his amazingly large jump took me around Intermediate and above, and somehow all the extra work would be worth it. I was finally going to get the feeling of galloping around a big course again — a rush that compares to none other!

That day had finally come, so I shined up my tack and my horse, packed up my trailer, and set out on the four-hour ride down to the Maryland Horse Trials. As fate would have it, our first Intermediate together at was going exactly NOT to plan! There was thunder and lightning that started during our dressage test, Jet’s nemesis — the liverpool — made a celebrity appearance in our show jumping, but by the time we got to cross country, we were cruising around like rock stars.

We came to the water jump, and with a beautiful jump in we were flying through the air, and I remember thinking, ‘We’ve got this.’ We didn’t. He stumbled on landing, and we both went down. As his feet were flying past my head, all I could think about was, ‘Please don’t hurt yourself or step on my face’ — one broken jaw in my lifetime is enough, thanks.

By some miracle — or his love for me, as my mom would later call it — he tried as hard as he could, and he saved me by not stepping on me at all. After pulling myself up out of the slop looking like a swamp thing, I made my way over to Jet, who had been caught by a super sweet woman who would prove to be very helpful in keeping both of us calm. I still don’t know who it was, but if you ever get to read this, I thank you immensely!

As I looked down at his foreleg, I noticed a huge laceration on the front of his carpus. Being a vet tech for eight years put me in a very unique position — somewhere between a rider about to lose their s$&@ after looking at the inside of her horses leg exposed and a vet tech responding to a crisis.

So I chose to operate somewhere in between, with the help of Dr. Davis (an amazingly compassionate man) who triaged him, we got him on the trailer and headed right to Running S Equine Hospital back in New Jersey. They took him in right away to perform the surgery to debride and close the wound and finished somewhere around 2:30 in the morning.

After a successful surgery, Jet spent two more weeks in the hospital, where he began to show signs of laminitis in his right front foot from shifting weight. Due to the diligence of Dr. Greg Staller and his staff, the laminitis was “under control” by the end of the two weeks, and he was ready to come home.

Between my mom and myself, over the next three weeks we performed cast changes every three days, icing every six hours on the right front foot, and kept up a high level of pharmaceutical support. Lucky me — a young horse that we were competing at the Novice level a month before slipped and fractured his hock. This resulted in a Robert Jones splint for two months, so I was well apprised of how to handle bandage changes.

Jet seemed to do well, and at the end of three weeks and a successful re-check exam, he was out of the cast. (Insert being able to breathe and remotely sleep again here.) Although he was looking good, his case proved to be just a ticking time bomb. As soon as we started to decrease his bute, the laminitis seemed to take off with a vengeance.

Within a week of him showing symptoms of having trouble, he got so painful that we decided the most humane option for him was to let him go with his dignity and end his suffering. The options that we were faced with were unbearable for all parties involved.

When I keep a horse for myself to compete, I make a promise to them: If they take care of me, I will do everything I can to take care of them. If it could have been an option for him to be comfortable as a resident lawnmower, we would have given him that luxury, as I still have all the horses I retired from competition.

It wasn’t meant to be, and I truly feel that we exhausted every option that I felt was reasonable to try to save him. In Jet’s case, the best way that I could take care of him was to let him go while he still possessed all the qualities that made him the horse we loved. We fought so hard for each other all the way up until the end, and through him I now truly understand the definition of strength.

We also got to experience acts of heroism through the work of our vets, techs and farrier, who acted as not only professionals but also as horsemen and never treated Jet as just a case, but as a family member. Although we are gutted and our hearts are broken into a million pieces, it’s not about us — it’s about what was best for him.

Not a day goes by where both of us don’t cry for the loss of our friend. The important thing to note is that I do not blame the sport or the course designer; I blame a terrible accident, nothing more or less. There has not been a time where I have contemplated giving up riding due to any accident I have had in the past, and I’m not going to start now.

I am at a low spot right now, but I will get up again in time. I will start with another young horse and make my way up again. I am an eventer; this is my sport, and this is what I am meant to do. I have found inspiration in the stories from other people in our sport that had been in much worse situations and pulled through.

It’s time to pick up all the broken pieces of myself and my career and rebuild again. My parents, husband and eventing family have made that possible through an immense amount of support and love, and for that I am eternally grateful. My hope is that our story inspires someone else the way previous stories in our sport inspired me to keep going no matter what life throws at you.