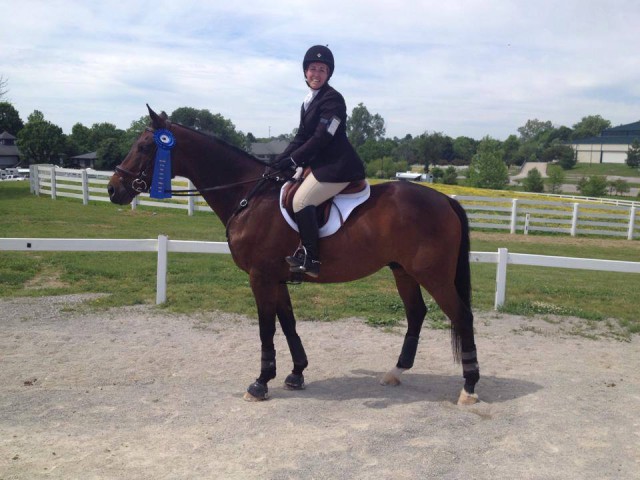 Kelly Rover and Wilder Than Syn after their May Daze win last weekend. Photo by Megan Moore.

Four years ago, Kelly Rover found herself with a Ferrari in her barn, but without the tools to drive it. That Ferrari was an OTTB named Wilder Than Syn, or Owen. Kelly had been on the hunt for a horse that could take her to the Training and Preliminary levels, as her previous Appendix partner — her F-150, as she put it — would not be able to go past Novice.

Kelly met Megan Moore, of Team CEO Eventing in Lexington, Ky., at Queeny Park Horse Trials in St. Louis, Mo., in 2009 after seeing several sale flyers around the event. “I told (Megan) what I was looking for, and she said she had the perfect horse for me,” Kelly said. “She said he wasn’t advertised anywhere, but that I would have to come out and try him.” Kelly was intrigued, so she made the trip to Lexington over Fourth of July weekend and immediately fell in love with Owen.

Owen was a former steeplechase horse owned and trained by William Wofford, brother of Jimmy. Owen campaigned up and down the East Coast until he was 6 years old, having some success over some of the toughest chasing tracks in the country. Megan had seen Owen a few times throughout his career and jumped at the opportunity to acquire him when his racing career was over to find out if he had potential to be an event horse. 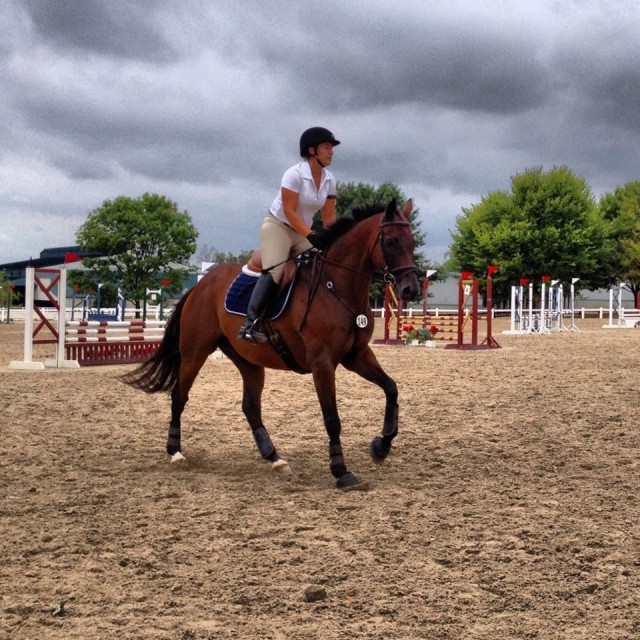 Kelly and Owen at Kentucky Classique in 2012. Photo by Megan Moore.

Megan is well-known for her affinity for “hot” horses and her ability to really get through to them and coax the talent out. When Kelly met Owen, she immediately fell in love with the hot and nervous Thoroughbred and brought him back to St. Louis with her. Once they got home, though, it was hardly smooth sailing.

“He is very hot and extremely nervous,” Kelly said. “He’s the one I would take cross country schooling and would be dripping white lather just from pure nerves. I literally had this Ferrari and had no idea what to do with it.” Without a trainer at home, Kelly found herself struggling to harness Owen’s power and use it to her advantage. “I took him to some 2-foot classes at some hunter/jumper shows and some Beginner Novice events, but we had a lot of problems and would get eliminated a lot. The first couple of years were tough.”

Owen had a tendency to use his prior steeplechase training and run full speed at a fence, only to lose his confidence at the base and slam on the brakes. “It was really the worst extremes on both sides: extreme acceleration and extreme brakes.”

Kelly realized that she needed more help with Owen, so when she saw Megan at Queeny Park again, she asked if Megan would consider taking on an adult working student. “Most working students are 18 to 22 years old and are able to commit to at least six months of work,” Kelly said. “Here I was, a 30-year-old adult with a full time job wanting to come work for just a few months, which is all I could take off from work.” Megan generously welcomed Kelly into her program in Lexington, and Kelly and Owen were off to spend the summer at Team CEO bootcamp.

By the conclusion of their summer work with Megan in 2012, Kelly and Owen were successfully competing at Novice, including a third place finish at Jump Start that September. “I learned how to be very direct and purposeful with my riding so that I wasn’t flopping around sending mixed signals,” Kelly said of her time in Kentucky. “Through riding (Megan’s) sale and training horses in addition to Owen, I learned a lot about my riding and my horse.” 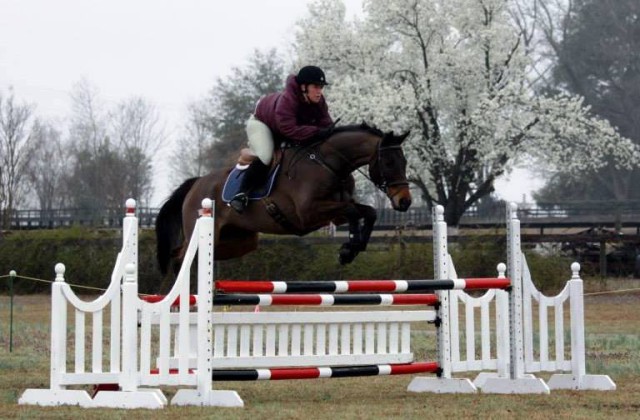 Kelly and Owen schooling in Aiken. Photo by Le Tilghman.

Kelly and Owen moved back to St. Louis and resumed their work, only to begin running into some struggles again. “I realized it was never going to get better unless I had more help,” Kelly said. Incidentally, Kelly and her fiance, Nathan, were planning their upcoming nuptials. “I asked him if we could move to Kentucky after we got married, and I got really lucky when he said yes,” Kelly said. Both Kelly and Nathan work for IT companies, and they were both able to obtain permission to move; within 30 days the couple was married, had gone on their honeymoon and moved to Lexington to reunite with Megan.

“Having the ability to ride, train and compete regularly has just been wonderful,” Kelly said. “Owen has gotten to the point after four years competing together where people will comment and tell me how lucky I am go to have such a quiet horse! If only they knew how very hot and nervous he actually is. The difference is that now he has the confidence to look to me for an answer, and I have the confidence to know that he has my back as long as I have an answer for him.”

This year, after about eight months working with Megan full-time, Kelly and Owen, who is now 15, have amassed a hat trick of three consecutive wins at the Novice level, most recently picking up a win at May Daze in Kentucky. “We’ve definitely come a long way together, and I have to give the credit to Megan for helping us every step of the way,” Kelly said. “It’s all about keeping him confident and happy, and as soon as I feel he is losing confidence or not enjoying his job, we will take a step back.”

Kelly plans to move up to Training level next, which has been a big goal of hers since the beginning. This year has gotten off to a wonderful start for a pair, and Kelly is immeasurably thankful for the opportunity she has had to improve her riding and take a leap of faith. “Megan was definitely the right person for me to end up with,” she said. “There are trainers and programs all over the country where I could have probably been just as successful, but I think there was an advantage here since Megan already knew Owen. It’s just been an incredible opportunity, and I wouldn’t have been able to get to this point without her.”

You can follow along with Kelly and Owen’s journey on her blog, Event Reiter.