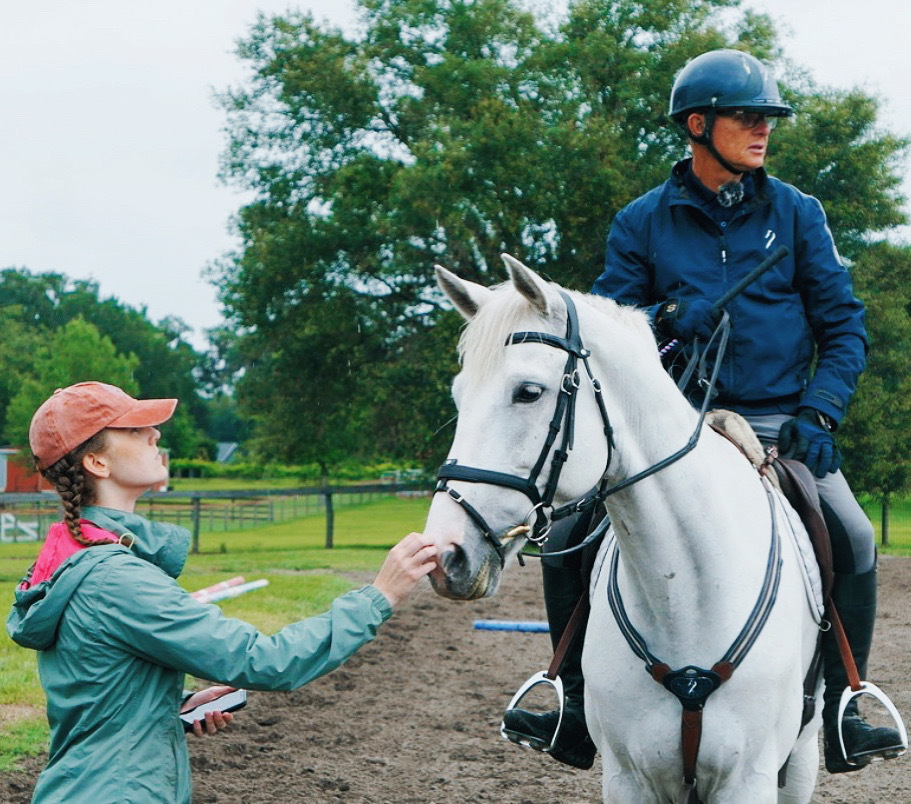 Innovation and entrepreneurship have major impacts in the equestrian world.

In 2021, I was approached by two entrepreneurs who asked me to collaborate with them on a new app. Intrigued, I said that I would be happy to help.

I have friends who have worked at start-up companies, and I know that it is often not easy—you have to find your niche in the market, understand what consumers need and want, design a great product, and finally have the organization and management to deliver it. It’s well-known that most start-ups flop—it’s just incredibly hard to get something off the ground. Even a really good idea sometimes doesn’t come to fruition.

Ride iQ is a great idea with an even better team behind it. Since launching over the summer, it has grown considerably and continues to adapt to its riders’ suggestions and needs. My role as a coach has been both fulfilling and educational, and I think Ride iQ has the potential to make a major impact on the quality of education in equestrian sports moving forward. Improving people’s access to quality instruction can be life-changing.

Read on to learn more about the app’s founders, McKinsey and Jessa Lux, and about their vision, motivations, and plans for the future. 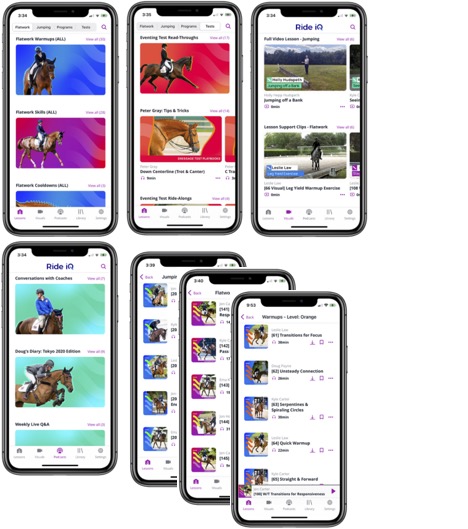 What is Ride iQ?

Ride iQ is a mobile app with on-demand, prerecorded audio lessons taught by the world’s best equestrian coaches. As the first audio-focused training platform for equestrians, it offers something completely new to riders: the opportunity to get on-demand instruction while you ride. Lessons cover topics across flatwork and jumping and are organized by level, coach, and duration – all you have to do is tack up and press play.

Here’s how it works: a coach records themselves while they ride a horse, either doing a full training ride or focusing on a specific movement or exercise. Throughout the ride, they talk about what they are doing—whether it be applying left leg through the corner, raising their eyes to the opposite diagonal letter, or giving the inside rein to allow the horse to stretch. Next, Ride iQ publishes this recording on the app, allowing its subscribers to essentially “ride along” with the coach. Riders simply get on their horse, hit the play button, and listen to the coach as they do the same exercise. In effect, they are getting a private lesson with a coach whom they may have never met, and they may live thousands of miles away from.

Ride iQ launched in August of 2021 and is currently focused on English disciplines with coaches who specialize in eventing, hunter/jumpers, and dressage. Ride iQ membership costs $29.99/month or $249/year and includes access to 200+ audio lessons, private podcasts, weekly live Office Hours with a Ride iQ coach (you can ask them any questions you want!), and a private Facebook community. Ride iQ also recently launched its own podcast, “In Stride with Sinead Halpin Maynard”.

Ride iQ provides everyday riders access to an elite level of coaching that is currently only accessible to a small minority of equestrians. By giving broad access to exceptional coaching, Ride iQ raises the standard for safer riding and better performances. 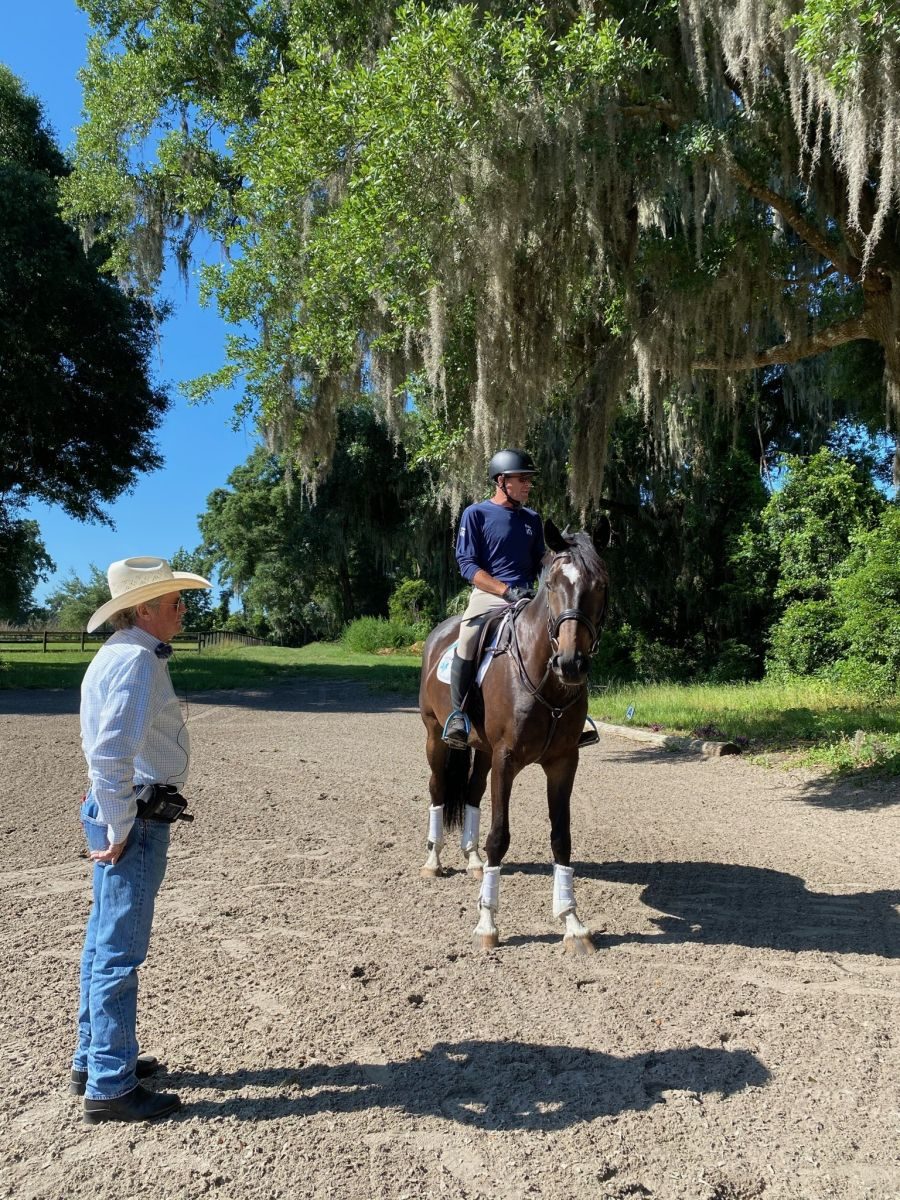 Kyle Carter taking a lesson from Dennis Mitchell for a Ride iQ recording.

Why did you start Ride iQ?

We grew up riding in Minnesota and then in Florida, where we moved to work with Kyle and Jennifer Carter. Instruction from 5* riders made us much more capable riders. Regardless of who we worked with in person, though, our independent schooling rides often felt unproductive and even frustrating. We weren’t making as much progress as we could have been on those days, and we knew this wasn’t unique to us. We built Ride iQ to give all riders access to quality coaching during their independent schooling and in turn, elevate horse and rider experiences and performances.

With Ride iQ, people’s schooling days are no longer repetitive or stagnant. Instead, those are days to ride with real-time guidance from a top-level coach and have great rides (and even breakthroughs!). The feedback from members has been overwhelmingly positive: they’re having more productive and fun schooling rides, and that’s the goal!

Who are some of the coaches on the app?

Jon Holling – 5* US Event Rider, FEI National Safety Officer for the US

Where are app members based, and what level do they ride at?

We currently have members in 43 states and 10 countries, and we hope to continue to expand our national and international presence. Our members range in age from 7 years old to 80 years old, and we have beginner walk/trot riders to Olympians using the platform.

People have told us that before Ride iQ, their schooling rides lacked guidance and direction; with Ride iQ, those rides can be a source of improved understanding, helpful exercises, new insights, and better experiences for horse and rider.

We also have members who ride professionally. They use the lessons to guide their own schooling as well as for inspiration in the lessons they teach. With the best coaches in the world guiding you in real-time while you ride, there is something every rider could learn on Ride iQ.

What other services or events does Ride IQ offer?

In addition to unlimited access to hundreds of listen-while-you-ride audio lessons, the Ride iQ app includes dressage test read-throughs where tests are read aloud for practice and memorization as well as test playbooks from top riders and judges to help you get your best score at your next competition. Ride iQ also offers members weekly live Office Hours with a Ride iQ coach to ask any and all questions and a private Facebook community for 24/7 interaction with the Ride iQ team, coaches, and fellow members.

Ride iQ also hosts in-person events at major competitions around the US (and soon internationally) throughout the year including Ride iQ coach led course walks and sponsored member parties.

You can sign up for Ride iQ by visiting Ride-iQ.com and following the prompts to start your 7-day free trial. All the membership options (monthly, quarterly, or annual) include a free trial, so it’s completely risk free to try it for yourself!

Still on the fence or feeling skeptical? Amateur eventer Abby Powell took Ride iQ for a spin and shared her thoughts in this review.