Michael Willham is a member of the Otterbein University Eventing Team in Ohio and a regular guest contributor on EN. You may have read his articles about adventures in Aiken and tackling his first long format Training Three-Day. Now he’s back with tips about how to survive your first FEI event. Many thanks to Michael for writing, and thanks for reading! 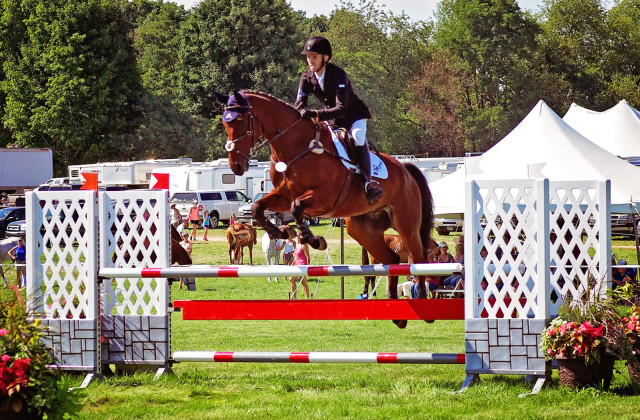 You may have read my article last fall on how to survive your first long format event when I competed at the Hagyard Midsouth Training Three-Day Event at the Kentucky Horse Park. Well now I’ve officially survived my first CIC* at Richland Park Horse Trials, and I’m here with the next survival guide.

While my dressage and show jumping may not have been up to par with what we can normally do, the cross country is what really matters, and that was SUPER FUN!

Fernhill Cayenne and I have had random blips out on cross country since we’ve moved up this spring. A clear round in our first Prelim, a refusal at the next, a fall at the water after that, then a clear round, another fall, another clear, but never making the time. Well I was bound and determined to go clear AND inside the time, and that’s exactly what we did!

We were one of only 10 double clear rounds in the 39-horse division, and it moved us back up to finish a respectable 14th. Regardless of where we finished, I couldn’t have been happier with my boy for taking me around my first CIC* cross country double clear.

Without further ado, although they might not be as hilarious as my experience at the long format, here are my dos and don’ts of your first FEI event.

DON’T forget the white tie. I made the realization that I needed a white tie instead of my colored tie about an hour before my dressage! Luckily we eventers are a helpful bunch, and I found one I could borrow. (And then went to the store to buy my own for show jumping).

DON’T be controversial about dressage. One judge gave me a 24.55 (raw score before FEI multiplier) while the other gave me a 40.0. Don’t be the rider who has his test taken by the judges to dinner so they can discuss it further.

DON’T bust out singing “Dressage Skillz” when you see Dom Schramm. Quietly sing it in your head and have it get stuck in there, only to get renewed when you see him again and again.

DON’T get backed off when the plain brown warm-up jumps change to bright, colorful show jumping rails. Our normal double clear show jumping round turned into a 9 penalty score as we dropped a rail at the A and C element of the triple and came in one second over time. My guess is we were very backed off because the rails went from natural brown in warm-up to bright and colorful in the ring.

DON’T think the volunteer in charge of the spectator crossing path is waving you down with his red flag. I was flying past him and saw a red flag out of the corner of my eye. I yelled to ask if it was for me, then realized he was keep the spectators safely out of the path.

DO order your shadbelly many, many months in advance so you aren’t a nervous wreck when it doesn’t arrive until two weeks before the event. Four to six weeks turned into “well I can’t guarantee it will be there in time.” Luckily my buddy at Animo pulled it off and got it to me in time.

DO practice riding dressage without a whip at home. I always have a whip to re-energize his hind end, but you can’t take one in an FEI dressage test. I had my work cut out for me to keep him energized throughout the whole test.

DO watch how the other divisions handle the conditions before you go out on cross country. If you have time, watch as many rounds as you can! It really helped to see that the only good rides in the wet conditions were the truly forward and attacking rides. Anyone who backed off to the jumps got stuck at the base.

DO change your stud choice to bigger studs if conditions call for it.

DO go mudding and blaze around your first CIC* cross country double clear. After all, this is what we are all here for. (Bonus points if your horse is Irish and can switch into four-wheel drive. He knows what’s up when the weather gets wet!)

Here is the helmet cam video. Click the settings to upgrade the video quality and ride along with me on this wonderful course.

As always, a big thank you goes out to my parents, my trainers, my friends back home who were rooting for me, and my sponsors Nutrena Horse Feed and Prestige Saddlery.