It’s a day we all knew, deep down, was coming, but it certainly doesn’t make the announcement any less poignant: Jonelle Price has officially retired Classic Moet and Faerie Dianimo, the dynamic mares with whom she won back-to-back five-stars in 2018.

“With the season drawing to a close, sadly the time has come to officially call time on these two incredible mares’ careers and break the news to Molly [Classic Moet] that she won’t be going to Badminton,” writes Jonelle of the mares, both of whom are owned by Trisha Rickards, who also bred Faerie Dianimo. “They have done so much for my career — taught me how to compete on the world stage and together made many dreams, reality. I will miss them hugely and forever be indebted to them for all that they did for me. Trisha Rickards, not only their owner but one of the most knowledgeable horse ladies I’ve met, thank you for entrusting me with Molly and Maggie’s journey. I owe them everything.” 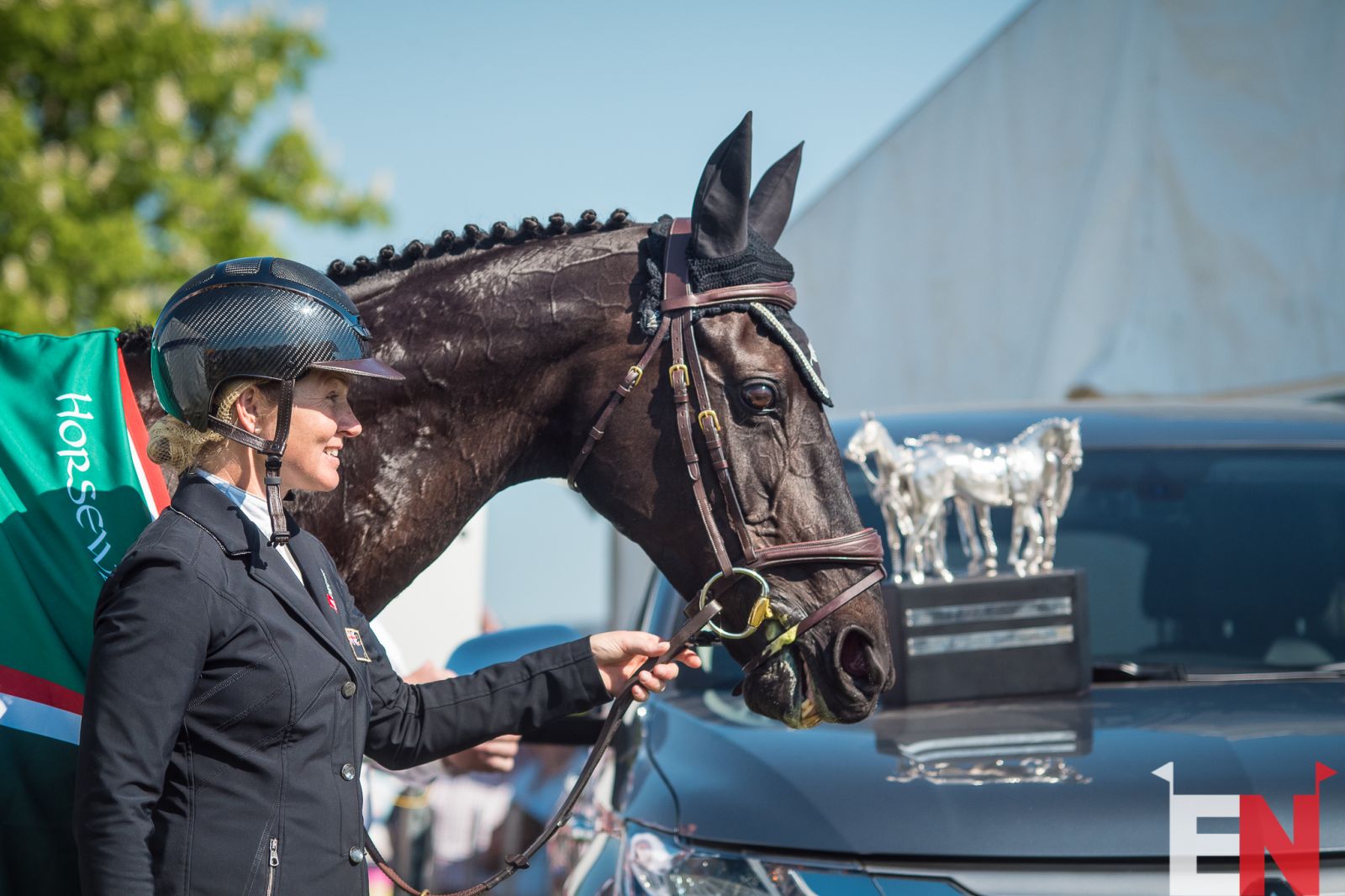 Jonelle Price and Classic Moet check out their new piece of silverware at Badminton 2018. Photo by Tilly Berendt.

But it was at the five-star level where each mare truly shone. Though enormously different in their characters and styles, both mares shared a common characteristic: an excess of grit, which helped them to log fruitful, lengthy careers.

Classic Moet (Classic x Gamston Bubbles, by Bohemond) amassed 31 FEI eventing starts — plus a number of FEI jumping rounds in her winters on the Sunshine Tour — and ten of those, non-inclusive of World Championships, were at the five-star level. In seven, she finished in the top ten — and never finished outside the top twenty at the level, nor did she ever pick up cross-country jumping penalties at five-star. Across her career, though, she was most famous for her extraordinary penchant for easy speed, which led her to make the time in seven of those ten five-stars — and amass just 6 total time penalties at the level. 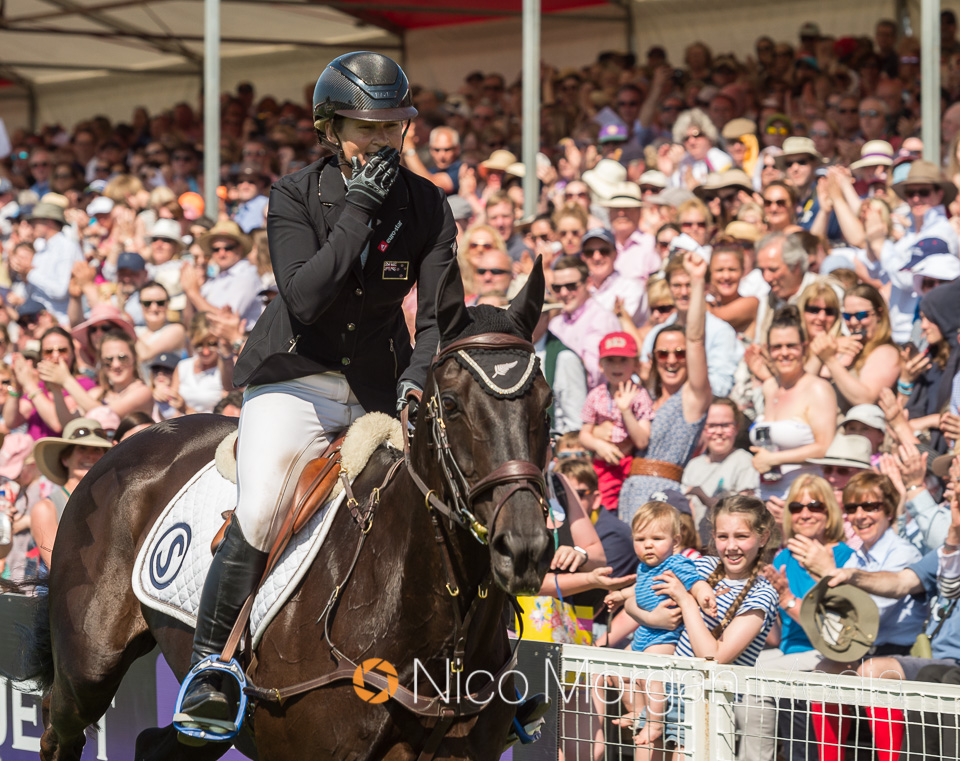 Jonelle Price finishes her round and realises that she and Classic Moet have scooped Badminton. Priceless. Photo by Nico Morgan Media.

“She’s so unspecial that she’s very special,” said Jonelle after cross-country at Badminton in 2018, where they finished just one second over the optimum time and ultimately went on to win. “She’s so quick that she makes me look good – I’m dreading the day she retires and people realise it’s all her! The partnership is so cemented – she trusts me. I got her as a ten-year-old and did a two-star on her at Hartpury and I thought, ‘I just don’t know how fast she’s going to be.’ But she’s proved me wrong, and she’s like a best friend. She wouldn’t be everyone’s cup of tea – she has a pretty peculiar way of going.”

‘Molly’s’ career began with British team stalwart Karen Dixon, who produced her to CCI3*-L before handing the reins to Darrell Scaife. He enjoyed two international runs on the mare before Ireland’s Esib Power took over, though her run with the mare was even shorter, with just one international start. New Zealand’s Caroline Powell was next up to bat, and she ran the mare in one FEI event before the unique mare landed at her final destination: Wiltshire’s Mere Farm, under the auspices of Jonelle. That was the latter half of 2013, and by late June of the following year, Molly was a five-star horse, finishing twelfth on her debut at Luhmühlen. 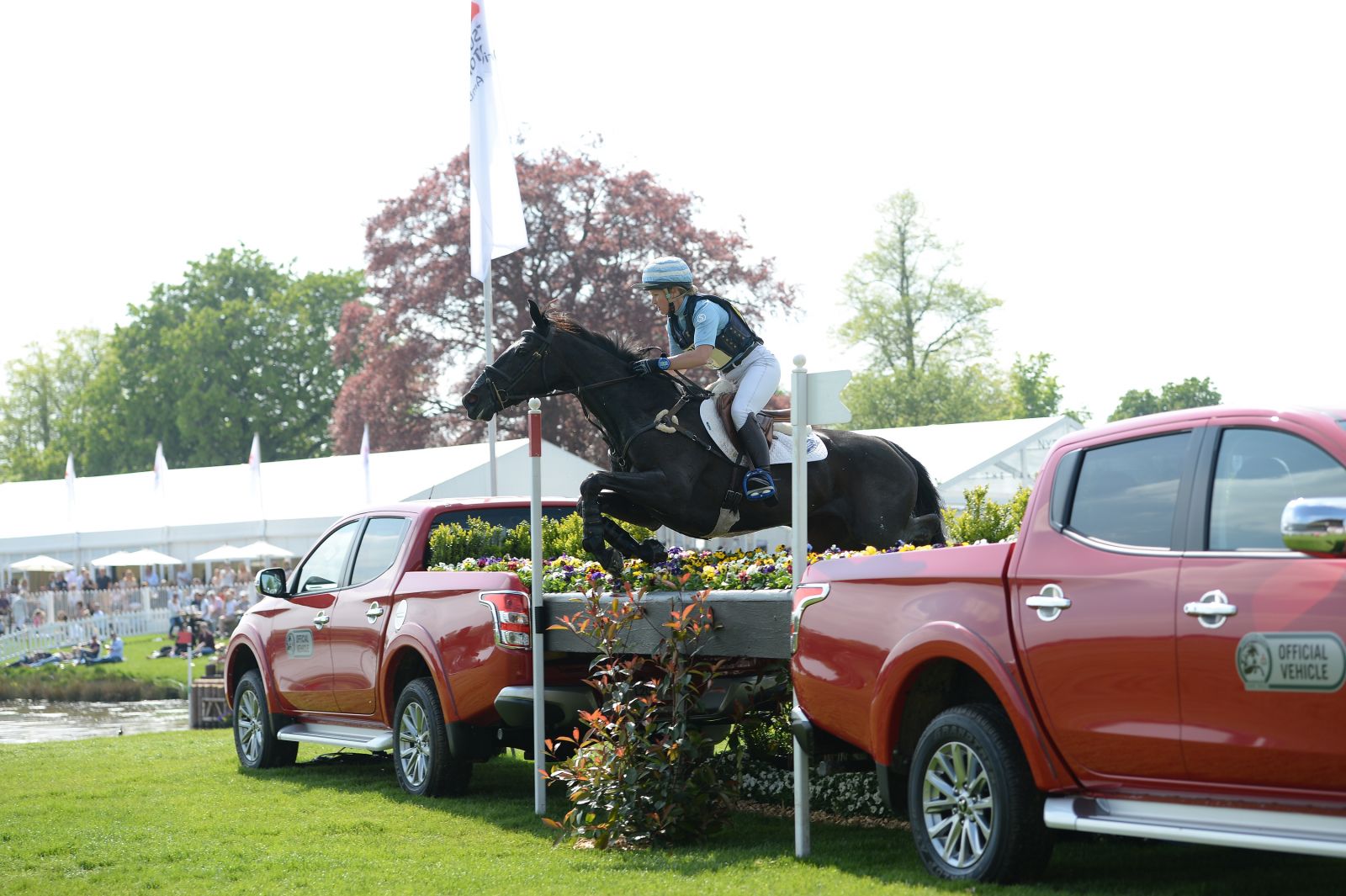 Her WEG debut would follow that year, and in 2015, Molly would make her first trip to Badminton, where she jumped clear inside the time on Saturday, giving everyone a taster of what was to come from the exceptional little athlete. A frustrating first phase and two rails down on the final day meant they had to settle for twentieth place — but that would be the lowest Molly would ever finish at the level. That autumn, the pair were fifth at Burghley, and when they returned to Badminton in the spring, it was to take tenth place. A few months later, they were third at Burghley — and by now, everyone had clocked that the mare was truly a vintage sort of competitor, and one perfectly suited to the ‘Big Bs’. When she won Badminton eighteen months later, after Jonelle’s return from maternity leave, it felt like a bit of fairytale kismet come true: the unassuming champion ridden by one of the world’s fiercest competitors, taking her very first title at the level. In 2019, they followed it up with a decisive win in the British Open Championship at Gatcombe, which would be their last international run before Covid-19 hit.

Though the pandemic robbed us of, perhaps, another Classic Moet five-star victory, we’ve been lucky to witness her greatness around the world since eventing’s return. She’s been aimed exclusively at national level competitions as prep and five-stars as ‘real-deal’ runs, and in 2021, was seventh at Kentucky and eighth at the inaugural Maryland Five Star. This year, at the age of nineteen, she was eleventh at Badminton and fourth at Burghley, which would also serve as her final run. There, she was also awarded with the inaugural Avebury Trophy, given by Captain Mark Phillips to the horse and rider deemed to have delivered the best cross-country round of the day. They were the only pair to finish inside the optimum time, despite a stopwatch malfunction that meant that they had to rely solely on rhythm. 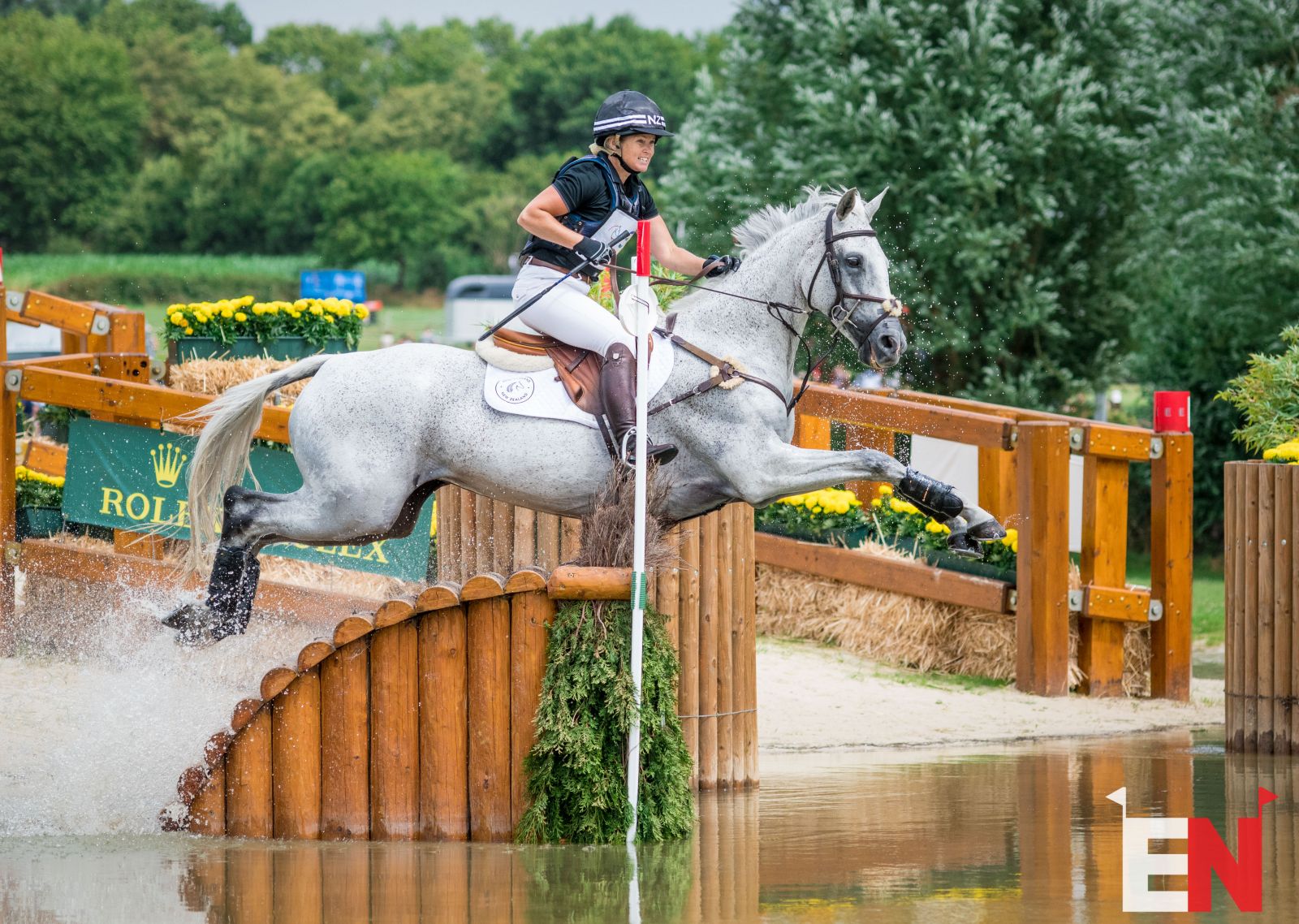 Jonelle Price and Faerie Dianimo at Aachen in 2019. Photo by Tilly Berendt.

Faerie Dianimo (Dimaggio X Faerie Dazzler VII, by Catherston Dazzler), for her part, made 37 FEI starts in her career, first bursting into the spotlight in earnest back in 2014, when she picked up her first international win in the Blenheim Eight- and Nine-Year-Old CCI4*-S. She then went on to make her five-star debut a month later at Pau, finishing fourth, and would follow it up with an impressive second place finish the following year at Luhmühlen. Two consecutive top-ten finishes in the tough CCIO4*-S at Aachen bolstered her resume, leading to her selection for the 2016 Rio Olympics, and on her return to five-star at Pau in 2017, she was once again in the top ten.

The next year, just over a month after Jonelle took her first five-star title at Badminton with Molly, ‘Maggie May’ gave her her second at Luhmühlen.

“Faerie Dianimo is pint-sized,” Jonelle told EN back in 2018 after that Luhmühlen win. “She is tiny. She thinks in her head she’s about 18 hands high — and it’s that attitude that has seen her get to the very top level of the sport. She fights me a bit on the cross-country, and in the dressage she can get a bit hot, but it’s these qualities that make her such a competitor. It was almost like she knew how important it was today.” 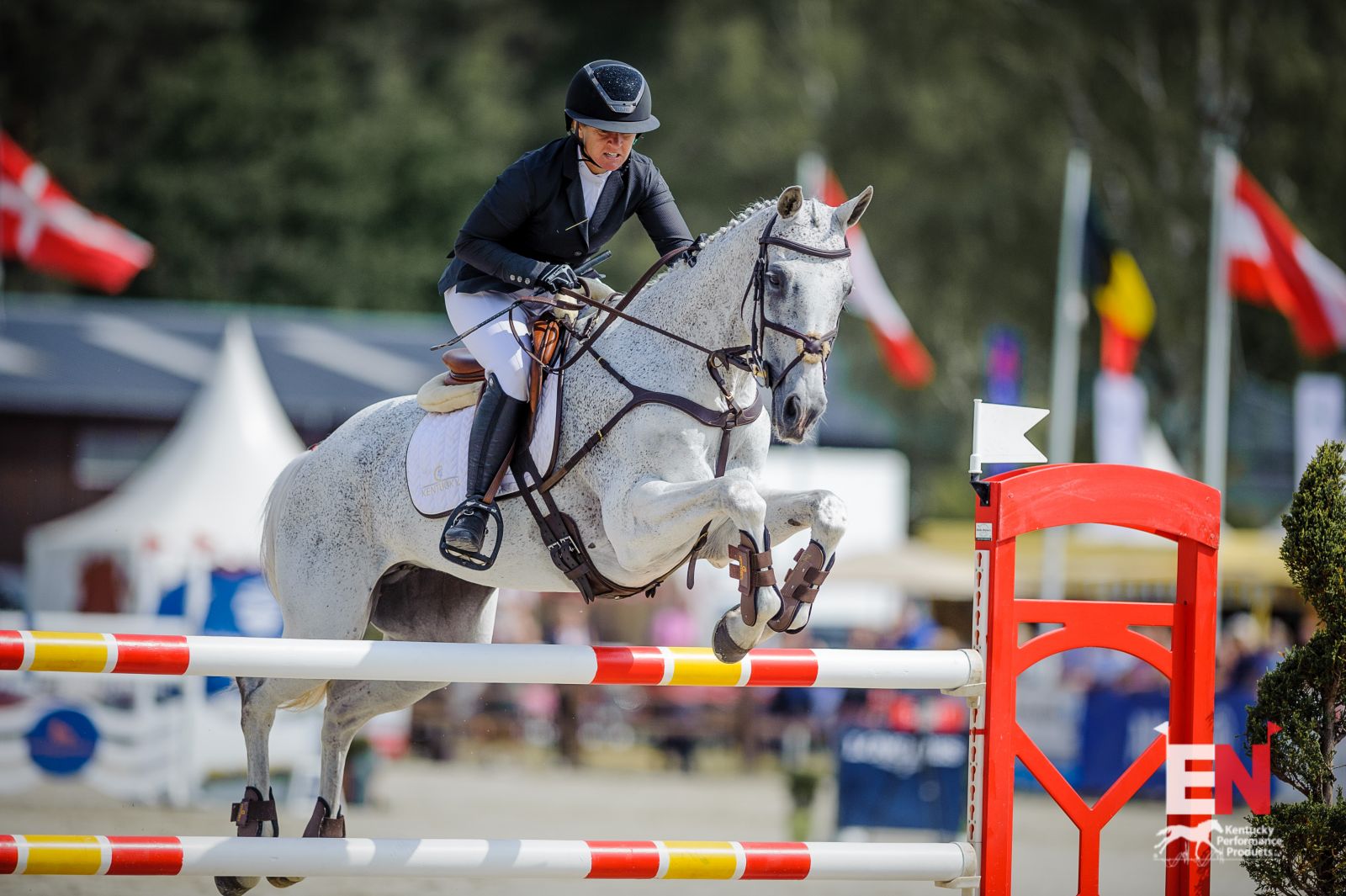 Jonelle Price and Faerie Dianimo put a run of bad luck behind them to take third. Photo by Tilly Berendt.

In the couple of years following that win, Maggie May was the victim of a bit of bad luck — but was also well-preserved by her rider, who never ran the horse when circumstances made them uncompetitive. She started at Burghley in 2019, but activated a safety device for 11 penalties, after which Jonelle decided to save her for another day; the next year, she travelled to Pau but delivered an uncharacteristically high dressage score, and so Jonelle withdrew her before the cross-country. In 2021, Maggie May was one of five horses to make the big, two-week journey to Luhmühlen with the Prices, who cleverly worked around travel restrictions by competing abroad and basing with the Netherlands’ Tim Lips, but a freak stumble on course saw her and Jonelle hit the deck while in a competitive position. This year, though, they returned to Germany and took a decisive third place finish in the CCI5*, proving that the good stuff had been there all along, despite some mishaps along the way.

“She’s just had a few unlucky years,” said Jonelle at Luhmühlen. “In 2019 at Burghley she had a reaction to a jab in her neck and wasn’t quite right, and then last year here I had a stupid crash. She hasn’t really been off form, but we just haven’t had a clean run – and she only does one big event a year, because she’s made of glass, so when you only do one a year and you fuck your chance, it’s a long old way to the next!” 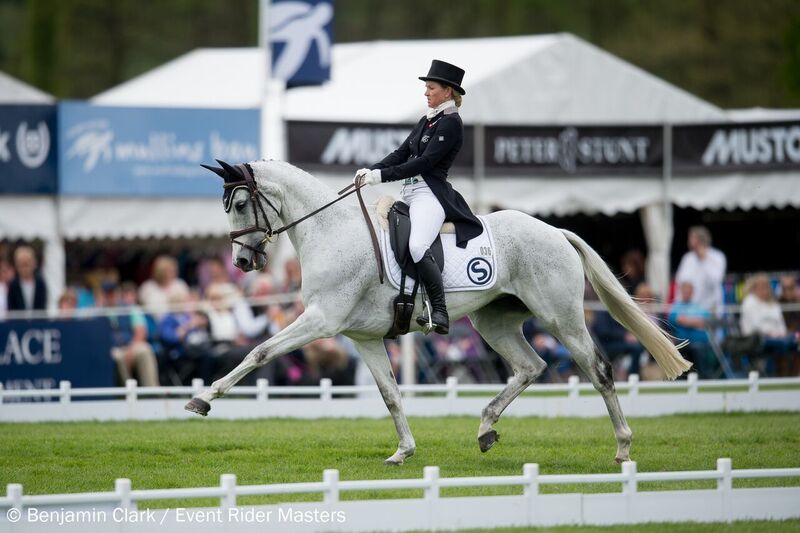 Of that last run, Jonelle continued: “It’s kind of a relief, and just a pleasure to have her here, because she’s been such a phenomenal mare. She went Advanced when she was eight — she did the CCI4*-L at Blenheim at eight and won the eight- and nine-year-old CCI4*-S there as a nine-year-old, so she’s been a pretty special mare. It’s nice to finish up on a good one.”

“As much as she’s brilliant in every respect, she’s a right madam and she’s as hot as you like. So the dressage is quite hard work, and it’s not because she’s not capable. She can easily go from an 8 or a 9 to a 3 or a 4, and I’m afraid that’s just her. Even though she’s seventeen years of age, she’s not got any better. We sort of managed to keep a lid on it on Friday, but certainly when I was stood in the prize giving, I couldn’t help but think what might have been.”

“It was a relief, really, to tick the box and do all the right things, and she gave me a really lovely ride. She’s a little bit unorthodox; I think she’s got double-jointed front limbs or something, because you see one leg up there and one leg up there, but you know that she’s always fighting for the fence and looking for the flags. I always liken her to a tumble dryer — you sort of just sit on top and get rocked around, but she’s always trying to do the right thing.”

The well-earned retirement of these two extraordinary mares opens the door for Jonelle’s enviable ‘second string’, including this year’s Pau winner Grappa Nera and team bronze medallist McClaren, to step to the forefront of her line-up — but their unique characters will no doubt be missed aboard the Price lorry.

Happy retirement, girls — and thank you for all the great story fodder you’ve given us over the years! It’s been a pleasure and a privilege.