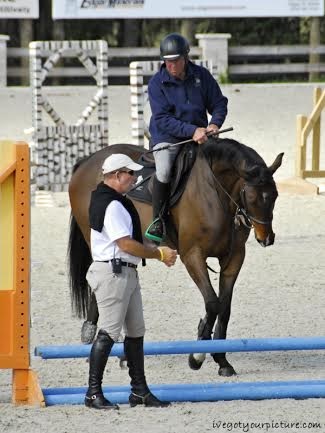 The second session at the 2014 ICP Symposium at Longwood Farm in Ocala, FL featured jumping instruction with top U.S. show jumper Aaron Vale. Aaron is no stranger to eventing, as he’s a good friend of Buck Davidson and even entered a preliminary event at Ocala Horse Properties back in 2012.

The groups began with some simple exercises to get their horses bending and using their bodies laterally. Riders would canter over a single vertical and then leg yield left or right to another vertical about eight strides away. They were encouraged to maintain a steady, controlled canter and add strides, keeping their horses very straight.

Another exercise was the famous “circle of death,” with jumps set at 12 o’clock, 3 o’clock, 6 o’clock and 9 o’clock. The green horses did most of this exercise just as poles on the ground, and it proved quite challenging (it is, indeed!). The more advanced groups performed the exercise set as low verticals. Cones were set up midway between each obstacle, creating a path to the center of the jumps. Riders first performed a large circle, going outside the cones, to add strides within the distance. As the horses became comfortable with that circle, the riders spiraled in to follow the center path between the cones. After another few revolutions, they moved to the inner circle, tracking to the inside of the cones on a more forward distance with more difficult turns. Finally, Aaron had them end the exercise on a controlled note, making one nice circle over the rails taking the route outside the cones.

Another useful set up was a simple straight line of three fences, 60-feet apart, a normal four strides. Aaron first had riders perform the line in a quiet five strides to five strides; then he increased the difficulty by asking for a four to a five. Riders had to meet the first jump with a fair amount of pace to get a comfortable four, and then horses had to be quickly obedient to add a stride for the five. It was a simple exercise, but revealed the horses’ true rideability and exposed some holes! Riders who tried to jump quietly in found themselves reaching for the four, which made the five strides even harder. The line rode easiest with a bold approach in, allowing the horse to comfortably “snug up” to the second fence and then whoa for the five.

The most advanced horses finished the lesson with an interesting gymnastic designed to push the horse to the face of the jump and have him hold himself off it. Riders cantered in over two low bounces, then one stride to a vertical, then a short two strides (with placing rail) to an oxer. The distance between the bounces and the one stride was gradually lengthened, encouraging the horses to stretch out a bit. Aaron wanted the horses to take a big step in the first stride of the two-stride, then have to quickly compress themselves to fit in the second stride; horses were forced to the base of the jump and had to be sharp with their front end to pick up over the front rail (actually a heavy panel) of the oxer.

Some riders were a little bit too careful and protected their horses, coming in a little weak to the bounces but allowing the horse to patiently hold back to the final oxer. Instead, Aaron encouraged them to ride in boldly and dare the horse to get closer to the fences — don’t just babysit them. Let them learn to hold themselves off the front rail.

For an honest critique of the clinic, I must say that Aaron’s teaching style left a little bit to be desired. I’m sure he’s a fantastic trainer, and I certainly wouldn’t turn down the opportunity to have a private lesson with him. However, I don’t think he was very well suited to the mass lecture format of the ICP Symposium. Many times the audience was left wondering “why?” when he would set up an exercise or offer subtle corrections to a rider.

The ICP Symposium has been blessed  in the past with some amazing “teacher teachers” who come in with a well-developed teaching philosophy and extensive lecturing experience. Compared to them, Aaron seemed less comfortable with audience interaction and could have been more precise and direct when answering questions. I was certainly intrigued by his ability, but unfortunately I didn’t come away with as much understanding as I could have. I could probably guess why he taught certain things, but it would have helped us to know the what and why behind his methods a little better.